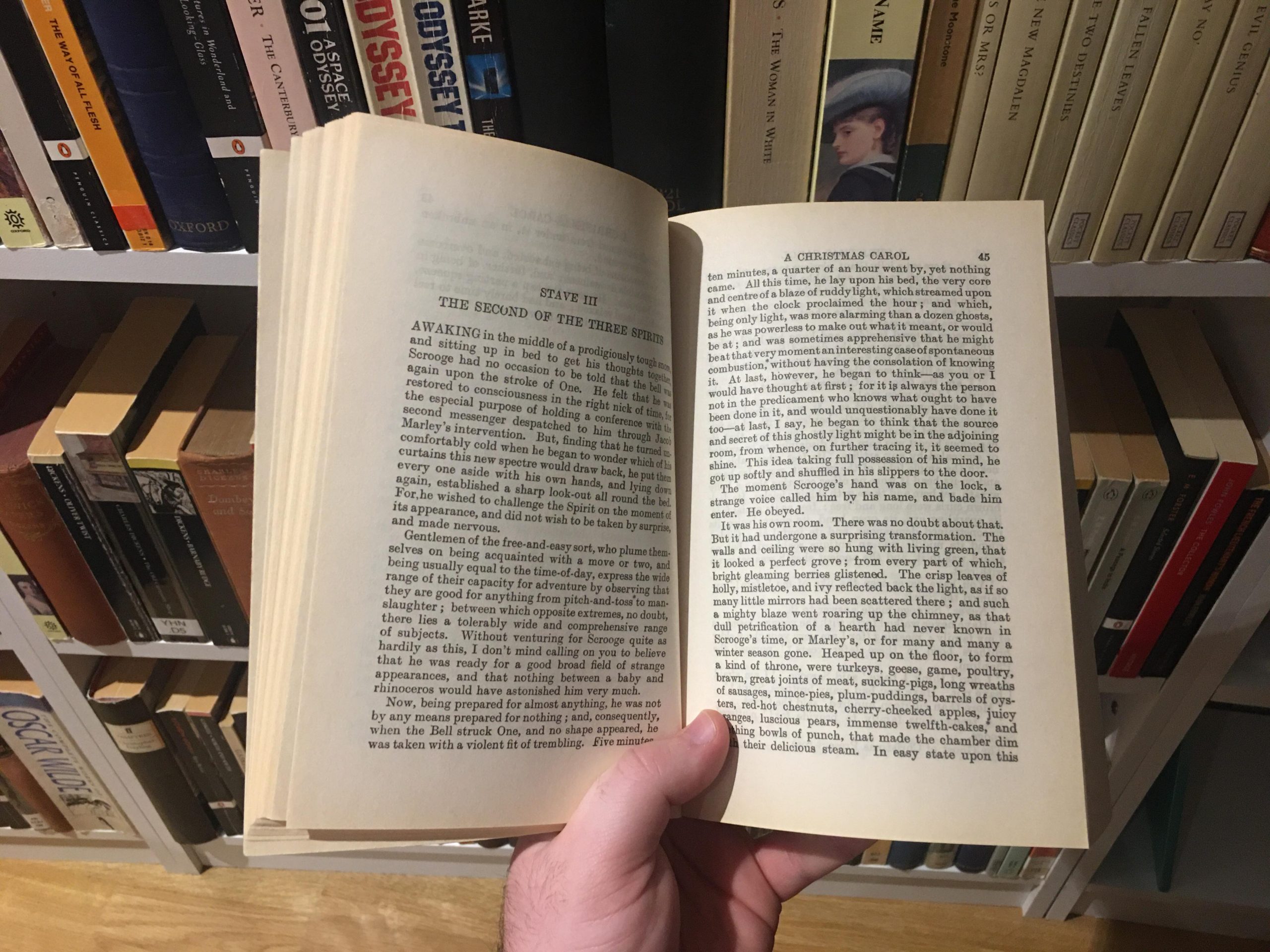 In the spirit of the festive season, it is only appropriate to talk about the best examples of fiction revolving around Christmas; so whether its Christmas or Hogswatchnight, here are a list of 10 of the best Christmas books to read this December, God bless them every one!

The adventure begins on Christmas Eve, with the theft of Countess Morkar’s prized blue carbuncle, an incredibly valuable diamond. Suspicion quickly falls on John Horner, who was repairing the countess’s fireplace grate. Meanwhile, hooligans attack a man in the street. Following the altercation, a hat and a Christmas goose are left at the scene of the fight.

At around 30 pages, this short archetypal Sherlock adventure is the perfect Christmas mystery to read if you are a master of deduction in need of some literary entertainment.

Most likely the most obscure novel on this list, Roads by Seabury Quinn is a fantasy novel documenting the history of Father Christmas from the early Christian era onwards.

Divided into three sections, Roads begins in Roman era, with a ferocious barbarian gladiator Claus returning to the Northland after completing his service in Judea. During his long and tiresome journey back to the Northland, Claus stumbles upon a poor family and saves them from a murderous Roman soldiers. Following this act of kindness, Claus’s life forever changed.

Whilst this novel doesn’t have the name recognition of many others listed here, Roads truly is an entertaining read and very creative Pseudo-mythology. At 110 pages this novel is a very manageable read; good luck finding a reasonable priced copy.

The novel begins when Simeon Lee invites his family for Christmas. During a meal, Lee excuses himself from the table and is overheard on the telephone indicating he wants to alter his will following the Christmas period. After dinner, family members hear a scream and rush to the patriarch’s room and find him dead. Soon after, the police and Poirot arrive.

If that plot sounds rather familiar to fans of the 2019 film Knives Out, it is likely because the writer/producer/director Rian Johnson was inspired by the novel’s incredibly complex and mysterious plot to create the popular movie starring Daniel Craig and Ana de Armas.

Whilst J. R. R. Tolkien is best known for his immensely popular high fantasy works, The Hobbit and The Lord of the Rings, however, the giant of 20th century literature, from 1920-1943 wrote a very personal collection of letters from the perspective of Father Christmas to his children.

The letters, from Father Christmas, tell stories of adventure, triumph, and disaster; from a rouge Reindeer scattering presents across the North Pole, to a Polar Bear falling through the roof of Father Christmas’s house.

For fans of the works of Tolkien, Letters from Father Christmas is the ultimate Christmas reading, and for those less familiar with the wonderful world of Middle-earth, these letters are still an entertaining and touching read.

How the Grinch Stole Christmas! is a children’s story written by legendary children’s author and cartoonist Dr. Seuss. The story is best known perhaps for its 2000 live-action feature film adaptation staring Jim Carey as the titular Grinch.

How the Grinch Stole Christmas! follows the Grinch, a curmudgeonly protagonist akin to Scrooge, who tries to cancel Christmas by stealing presents and festive decorations from the homes of the Whoville before having epiphany.

At under 70 pages, this book is certainly worth a read, if not only for the text than for the incredible surrealist art of Dr. Seuss.

Beginning with the awakening of a young boy by the sound of a train on Christmas Eve, this short story follows the boy and his fellow passengers journey to the North Pole on the the mystic Polar Express train.

This simplistic text is definitely worth the effort at only 32 pages, again, like How the Grinch Stole Christmas! if not for the story than for the impressive illustrations.

One of Hans Christian Andersen’s stand out fairy tales from his extensive collection, New Fairy Tales is, The Snow Queen. Focusing on the struggle between good and evil, this fairy tale has become one of the most popular Christmas-time stories for children around the globe.

The story focuses on the loving friendship of Gerda and Kai, and the extents Gerda will go to bring her friend back home from the Snow Kingdom.

At only 30 pages, The Snow Queen should definitely be on your Christmas reading list. Whilst almost all of Andersen’s fairy tales are amazing, this particularly is not one to miss.

Hogfather by Terry Pratchett is the 20th instalment in the Discworld series of books and the 4th in the Death storyline. That being said, Hogfather can be read as a standalone novel, and whilst you won’t appreciate all of the existing lore, arcs, and relationships, you will still definitely enjoy the read.

The novel focuses not on the titular Hogfather, a Father Christmas-like character who grants children’s wishes on Hogswatchnight (essentially in-universe Christmas), but on Death as he fills in the role of Hogfather while the original has gone missing.

At around 450 pages, Hogfather is certainly not a short story; however, like the other 40 novels in the Discword series of books, it is hilarious and worth the time investment.

Despite the fact, that E. T. A. Hoffmann may be best known for his gothic horror fiction, The Nutcracker and the Mouse King is quite possibly his most widely appreciated novella, particularly for its Dumas and Tchaikovsky adaptations.

The story beings on Christmas Eve, with a gathering at the Stahlbaum household. The Stahlbaum children, Marie and Fritz’s godfather Drosselmeyer, gifts the family a toy castle, and a Nutcracker. Marie worries about the nutcracker which was quickly broken, and at night she goes to visit it. What she sees, however, is either a vivid nightmare, or another reality.

The Nutcracker and the Mouse King is one of the least Christmassy books on this list; however, it is a masterpiece of gothic fantasy fiction, and at sub-70 pages it is a pretty quick read. Side note, if you don’t enjoy the Hoffmann original try the Dumas adaptation, it is far less dark and creepy.

Could A Christmas Carol really come anywhere on a list of the best Christmas books other than first?

A summary of A Christmas Carol, is almost unnecessary, it is not only one of the most popular books ever written, but has been adapted for every medium from Film, Television, and Theatre to Opera, Ballet, and Video Games (kind of). However, for continuity: the novella documents the transformation of Ebenezer Scrooge from miserly humbug to altruistic chum, and the apparitions that guide his journey.

A Christmas Carol is a heartwarming tale; it captures the Christmas spirit like no other novel and demonstrates the holidays ability to inspire good and generosity in even the most cold-hearted. At just above 80 pages, this is possibly the best choice for some light Christmas reading.