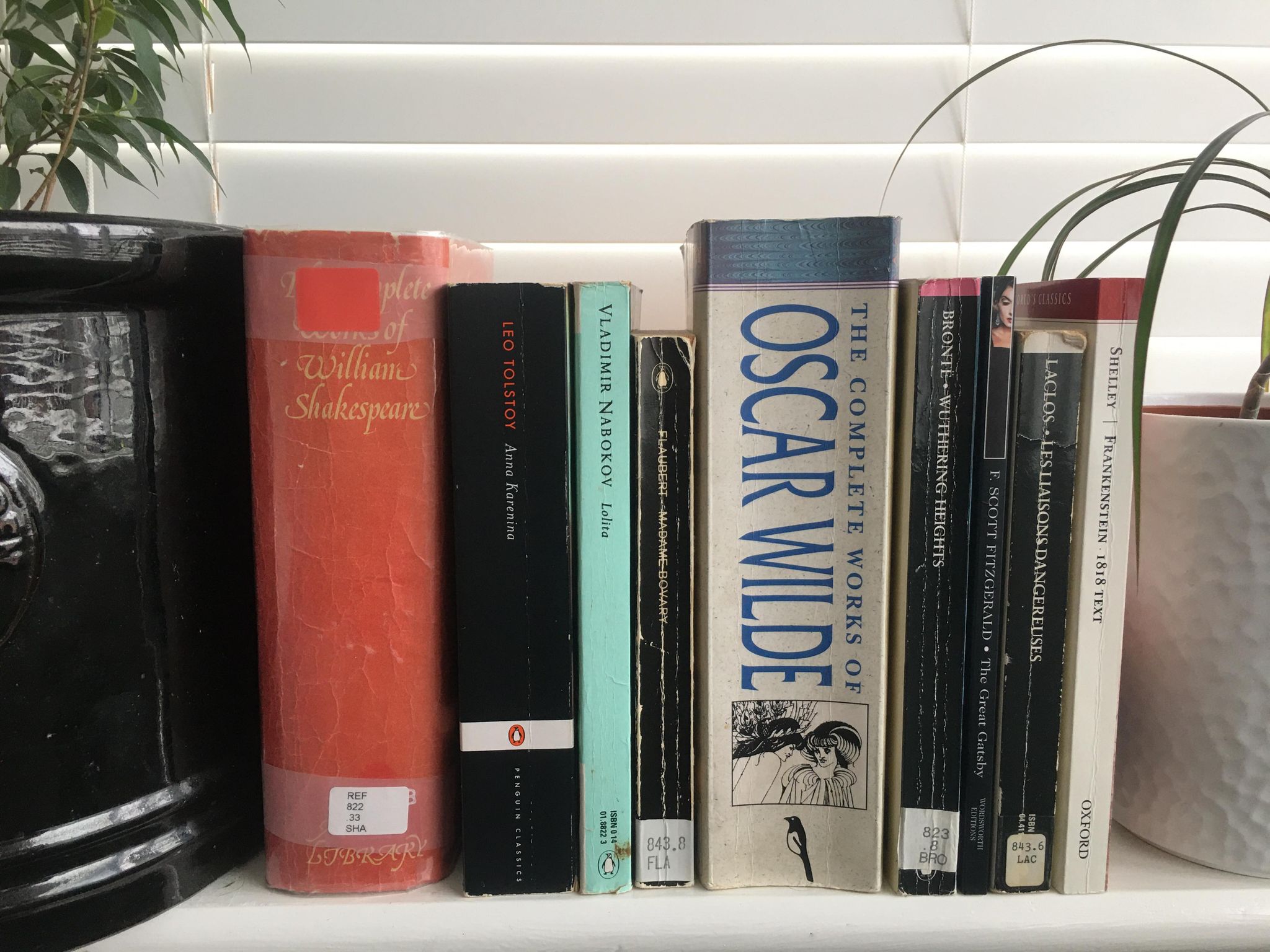 These ten texts demonstrate the less enchanting side of romance: the adultery, misery, and pain of it all. So, for the broken hearted, vindictive, and Valentines Day nauseous, here is a list of the top 10 most dysfunctional, horrible, or generally worst couples in all of classic literature to help you appreciate being single.

First on this list is the quintessential tragic star-crossed lovers tale Romeo and Juliet. Perhaps Shakespeare’s most popular play, Romeo and Juliet is believed to have been written between 1591 and 1595 and revolves around the forbidden courtship of its two titular characters.

The significant issue with the couple is their young age; whilst Romeo’s age is not overtly stated, Juliet’s is, and she is only 13. This is not to imply that the issue would be the potential that Romeo is an adult, the majority of portrayals of the character are in fact only around 13-16. The issue with their young age is the staggering degree of infatuation, exhibition of intense emotional instability, and the incredibly irrational demise of the pair.

If written by anyone other than the author of War and Peace, Anna Karenina would be a writer’s opus; it is a masterful triumph of Russian literature, and one of the most impressive/important examples of 19th century European fiction.

Whilst the novel spans over 850 pages, with many characters and sub-plots, the story itself revolves around the extramarital affair between the titular Anna Karenina, and Alexei Vronsky. The ultimate example of the literary love triangle, Anna Karenina deals with betrayal, social disgrace, and desire in 1870s Russia.

Madame Bovary is Gustave Flaubert’s crowning achievement; it is a seminal example of early literary realism, and one of the most influential works of European literature. Author Henry James said of the novel, “Madame Bovary has a perfection that not only stamps it, but that makes it stand almost alone.”

This is yet another case of a mismatched couple, Charles is described as simple, dull, and ordinary, and Emma as idealistic, passionate, and sensual. This unhappy relationship leads to extramarital affairs, reckless spending, and ultimately death. Whilst these events are not completely Emma’s fault, they are for the most part due to her romantic illusions and attraction to wealth/society.

Of all the novels, novellas, and plays on this list, I would most recommended having a read of Madame Bovary, whilst not an obscure title, it is likely less familiar to Anglophones then the majority of others featured.

F. Scott Fitzgerald’s most beloved novella, The Great Gatsby was published in 1925 and received favourable reviews upon release, but was not a commercial success initially. During the second world war, the text experienced a huge growth in commercial popularity and critical admiration which persists to this day, with many scholars of American literature holding The Great Gatsby with canonical esteem.

Whilst the most notable romantic relationship in the text is between Gatsby and Daisy, the most problematic coupling is Daisy and her husband Tom Buchanan. The relationship is a deeply unhappy one, with adultery, abuse, and rampant jealousy. Although Daisy is not devoid of blame, Tom certainly is the more egregious of the pair. If ever there was a literary candidate for divorce, it surely would be the Buchanans.

6. Petruchio and Katherina (The Taming of the Shrew – Shakespeare)

The Taming of the Shrew is one of Shakespeare’s best known and loved comedies; believed to have been written between 1590 and 1592, it centres around the courtship of Petruchio and Katherina.

The Taming of the Shrew is the first but not last example of one partner intentionally psychologically tormenting the other; in this case, Katherina is the victim of Petruchio’s continued psychological torture, in his efforts to ‘tame’ her. Petruchio’s method of instilling compliance is starvation, humiliation, and forcing her to agree with him at all times.

Side note, if you haven’t already, watch 10 Things I Hate About You (1999), it is loosely based on the play and definitely worth the 97 minute run time.

The only known extant novel written by Emily Brontë, Wuthering Heights (1847) was released to mixed reviews, and challenged for its depictions of contemporarily taboo subjects; however, today it is revered as a classic of English and Gothic literature. It portrays the, at times, acrimonious relationship of two families, the Earnshaws and the Lintons.

The most significant relationship from the first volume of the novel is that of Catherine Earnshaw, and the adopted Heathcliff. Obsessive, co-dependant, and toxic are but a few words to describe this relationship, and that is not to mention they were raised as siblings, which when considering their intense love is slightly nauseating. Heathcliff is incredibly vindictive when things fall apart, and his vengeance is a central feature of the second volume.

You may recognize the Oedipus name from the complex theorised by Sigmund Freud in his, A Special Type of Choice of Object made by Men (1910). For those of you unfamiliar, it essentially hypothesises that a young boy goes through a phase of hating his father and wishing to have sex with his mother… yikes.

Whilst the story of Oedipus emerges from the 5th century BC, the best known adaptation of the Greek myth is Oedipus Rex by Sophocles. Premiered c. 429 BC, Sophocles’ interpretation makes up one third of his trilogy of plays, the Theban Plays. The obvious issues with the coupling of Oedipus and Jocasta is implied with his namesake complex: whilst neither know of their mother-son relationship initially, when they do find out, the consequences are dramatic.

Written by Mary Shelley at only 18 year old, Frankenstein is one of the most popular and influential novels ever published; it revolutionised horror fiction, and is widely regarded as the first true example of science-fiction.

The most notable relationship in the novel is not a romantic one, but the pseudo-parental relation between creator and creation. This relationship between Victor and his monster is clearly analogous with the relationship between a disinterested God and man. Unlike other examples on this list, it is difficult to differentiate the transgressor and transgressed; Victor abandons his creation and refuses to indulge its needs, and the Monster destroys Victor’s life as vindication.

Les Liaisons Dangereuses (or Dangerous Liaisons) by Pierre Choderlos De Laclos, is an epistolary novel and one of the most controversial books in eighteenth century European literature. A critical study in libertinism, released seven years before the French Revolution, some theorists have hypothesised that the novel doomed the aristocracy in its scathing depiction of the class.

The relationship between de Valmont and the Marquis de Merteuil, depicts two narcissistic, if not sociopathic, former lovers who form a diabolical alliance to turn seduction into a competition; moreover, the couple take sadistic joy in recounting their exploits of seduction, manipulation, and a plethora of other depravities.

Lolita (1955) by Vladimir Nabokov is an incredibly controversial novel, regularly banned and challenged for its obscene topic. Despite this, however, it is also a classic of modern literature and has obtained a position within the western literary canon, consistently being cited as one of the greatest books of the 20th century/ever published.

The repugnant elements of this coupling result for the most part exclusively from Humbert. They extends beyond his misleading narration/excusatory narrative, manipulation of in-universe characters (and the reader), and final selfish act; the blaring issue with this couple is that Humbert is 37 and Charlotte is 12.