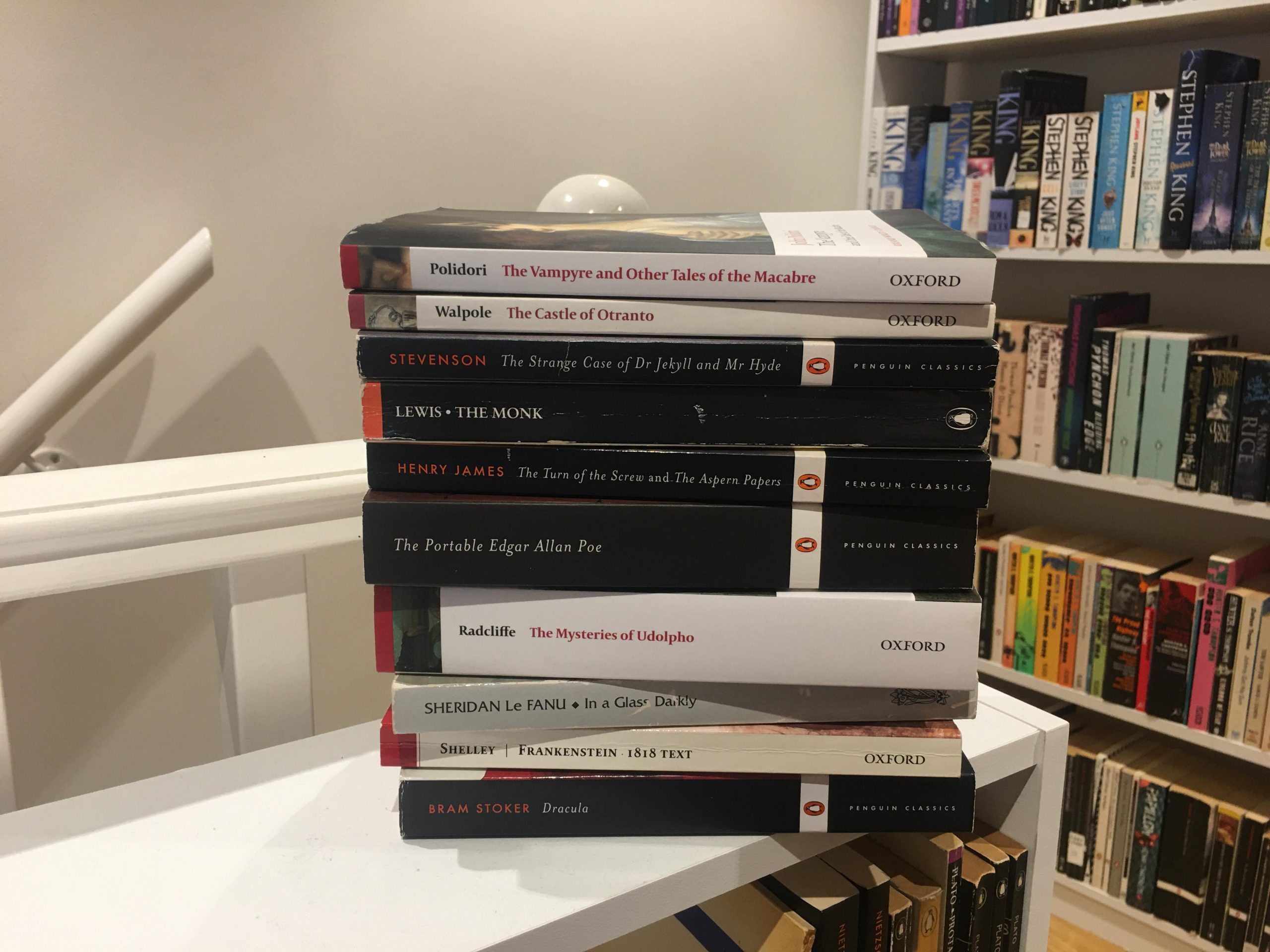 In the spirit of the spookiest season of the year, it is only appropriate to talk about the best examples of terrifying fiction. Many similar lists will feature books by modern horror icons such as Stephen King, William Peter Blatty, and Shirley Jackson; this list, however, is dedicated to those pre-1900 gothic literary classics that keep readers up at night and have done ever since their publication.

These titans of terror, suspense, and seduction will give any slasher, paranormal, or psychological horror film a good run for their money; so take off the cat ears, remove the fake fangs, and let the real fright begin.

The Picture of Dorian Gray, Wuthering Heights, The Woman in White, The Sandman, Vathek, Jane Eyre.

Widely considered to be the first gothic novel, The Castle of Otranto by Horace Walpole is the genesis of most purely gothic literary tropes; others would inspire sub-genre archetypes, but no other would have as significant a role in the foundation of gothic prose.

Beyond its literary historical significance, The Castle of Otranto is just an excellent book. Often compared with Shakespeare’s Hamlet, it follows the progressively desperate attempts of Manfred, the prince of a haunted castle, in preventing an ancient prophecy from destroying his lineage.

At only just above 200 pages, this gothic classic is a great choice for a few hours of suspenseful reading.

The Vampyre by John William Polidori was written as an entry in perhaps the most significant literary contest in history; whilst this significance is due to another book (perhaps one later on this list?!), it is still regarded as a classic of gothic literature and, significantly, a progenitor of the vampire genre.

Based upon a passage from Byron’s The Giaour, as well as his unfinished novel, The Vampyre begins with the narrator (Aubrey) meeting Lord Ruthven and follows their relationship and its consequences upon the women in Aubrey’s life.

The Strange Case of Dr Jekyll and Mr Hyde is a tour de force of Victorian era gothic literature. Written by Robert Louis Stevenson in reportedly only 6 days, this novella is a regular on top 100 books of all time lists for very good reason.

Explaining the plot of Strange Case of Dr Jekyll and Mr Hyde is probably redundant; however, for those who don’t know, the story concerns the relationship between the upstanding Dr Jekyll and the debaucherous Mr Hyde.

It is likely that all of you reading this will know ending, and many of you will have already read it; however, for those of you who haven’t I emphatically recommend you pick up a copy in time for Halloween. Again, this is on the shorter end of books listed here at around 140 pages.

The Monk by Matthew Lewis, is perhaps the least well known example of gothic literature to appear on this list; despite this, however, it is of seminal importance in the literary history of the gothic genre as it played a huge part in progressing the style from suspense to horror.

For any theology students or people familiar with the Old Testament, this text’s test of faith connotations are reminiscent of the Book of Job.

This book follows the corruption, downfall, and actions of a once pious monk name Ambrosio under the influence of a mysterious seductress. With themes of temptation, the supernatural, and the demonic, The Monk is a perfect book for the Halloween season.

At around 415 pages, this is definitely on the longer side of books listed, but if you can find the time it certainly is a treat (get it?).

Considered to be a proto-horror novella, Henry James’ The Turn of the Screw is one of literature’s great paranormal and supernatural texts. Thematically heavily influenced by Jane Eyre and The Mysteries of Udolpho, this late nineteenth-century paranormal thriller continues to captivate audiences and inspire creators of modern horror.

The Turn of the Screw follows a governess caring for two children (Miles and Flora), who, following a series of disturbing events, becomes convinced the Bly estate is haunted.

At around 150 pages, this novella is perfect for a few hours of poltergeist inspired fright; definitely a worthy contender for Halloween reading.

It would be easy to compile a list of the greatest gothic literary texts exclusively from the bibliography of Edgar Allan Poe; with almost eighty spine chilling short stories, the difficulty would come with choosing which to list.

Some examples worth checking out this Halloween include: The Fall of the House of Usher, The Cask of Amontillado, The Pit and the Pendulum, The Oval Portrait, and The Masque of the Red Death. That being said, you’ll struggle to find a Poe short story that doesn’t cause a shiver.

Ann Radcliffe would undoubtedly be the queen of gothic literature if not for Mary Shelley. Her gothic novels include the classics, The Italian, Gaston de Blondeville, and A Sicilian Romance; however, the greatest of all her literary output is The Mysteries of Udolpho.

The Mysteries of Udolpho is the archetypal gothic romance novel; its plot follows the tribulations of Emily St. Aubert (a refreshingly strong female character for gothic literature), harrowed by supernatural events and scheming villains.

Dark but surprisingly funny at times, The Mysteries of Udolpho is a masterpiece of creative writing definitely deserving a read. Be warned, however, it’s a good 700 pages…

The book is also widely known in pop culture for its parody; Jane Eyre.

Carmilla by Joseph Sheridan le Fanu is massively overshadowed by a later vampire novel by a fellow Irishman. Featured in Le Fanu’s short-story collection In a Glass Darkly, Carmilla is one of the most significant protegeners of the vampire genre; influencing everything from Dracula to Interview with the Vampire.

The story begins with the narrator (Laura) recounting her dreams, and the day a horse drawn carriage crashed on the grounds of her father’s remote castle, inside of which was the beautiful Carmilla. The book then follows the relationship between the two and the increasingly odd behaviour of the mysterious Carmilla.

An interesting study on LGBTQ+ representation in gothic literature, Carmilla is often cited as the origin of the lesbian vampire trope.

Carmilla, lands on the shorter end of books listed, at just above 100 pages. Whilst it is an excellent read, there is phenomenal dramatised audiobook version, staring Rose Leslie, Phoebe Fox, and David Tennant; so if you don’t fancy a Halloween read then definitely have a listen.

It is obvious that number 1 and 2 on this list had to be Frankenstein and Dracula, and picking either to be better than the other would be a disservice to their quality, impact, and legacy; the only appropriate answer then is a draw!

Written by Mary Shelley at only 18 year old during the same writing contest that spawned The Vampyre, Frankenstein transcends gothic literature, and is perhaps one of the best known and most adapted literary works in history. Despite this, no adaptation will ever come close to truly capturing the sheer brilliance of Mary Shelley’s opus.

If by any chance you haven’t read this book, I implore you to do so; it truly is excellent and really isn’t that long at sub 300 pages.

Finally, Dracula by Bram Stoker, not the first vampire novel on this list but certainly the most historically and literarily significant. Whilst Frankenstein employs science-fiction elements to assist the horror, Dracula is pure gothic from start to finish. Heavily influenced by Carmilla, The Land Beyond the Forest, as well as eastern european folklore, Dracula has commanded the attention of audiences with its prodigious ability to induce dread for over 100 years.

Comprised of journal entries, letters, and telegrams, Dracula is the ultimate epistolary novel. Beginning with journal entries addressed to Mina Murray documenting his (Jonathan Harker’s) travels from London to the Transylvanian castle of a mysterious count, Dracula thrives in its ability to create an uneasy atmosphere.

Dracula remains as suspenseful and horrifying today as it was upon publication and, as with Frankenstein, if you haven’t read this book, I beg that you give it a go; it truly is excellent, and no movie adaptation could possibly capture the horror on every page.