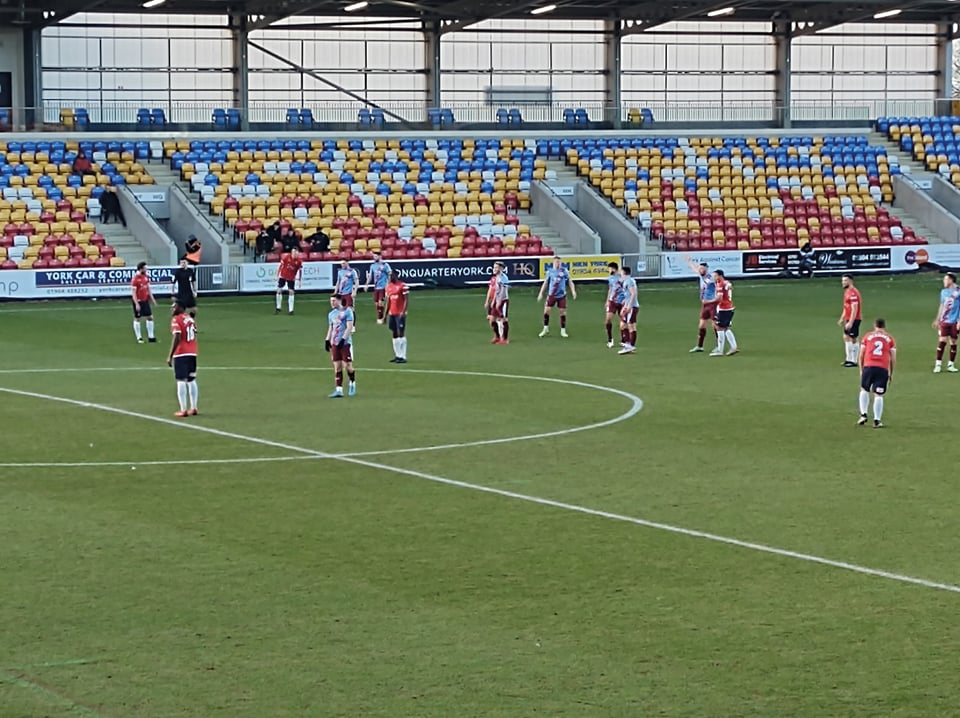 The Tynesiders came into the match as clear favourites, having won their last four games on the bounce, an impressive run which most recently had them beat Leamington 3-1.

York City’s last outing in particular, a bruising Tuesday night defeat to Bradford, saw the team booed off after the Minstermen’s good possession spells were wasted by toothless displays in front of goal.

This lack of finishing firepower may have been the reason for John Askey changing the front line lineup, with Kurt Willoughby starting as a striker.

Both teams aimed to defy the strong winds and kept the ball in the air for the first few minutes of the match, with Gateshead doing well to win aerial duels against a taller York City side.

The first real chances came from Minstermen defensive mistakes, as several attempts to play out from the back led to Cedwyn Scott gaining possession in the final third.

Gateshead’s Number 19 failed to convert any of these chances, however, in part due to the strong individual defensive displays of York City’s backline.

Long balls exposed both defences early on, with the Minstermen particularly vulnerable to balls over the top in the first 15 minutes.

These runs in behind afforded the Tynesiders extended stays in York City’s final third, but the visitors were only able to create two shots which both failed to challenge the goalkeeper Pete Jameson.

When the Minstermen did manage to break into Gateshead’s half, their counter was halted by the offside flag, with Kurt Willoughby caught three times in quick succession.

The south stand fans were quick to voice their anger, with “we want Jason out” and “sack the board” sung throughout the first half.

Despite this, the Minstermen appeared to be aware of the tougher opposition they were facing compared to earlier in the week and seemed tighter and more focused.

This stronger performance was driven by Man of the Match Akil Wright, who threatened in the first half with a wide header before driving forward from midfield to set up Mitch Hancox for a close shot on goal. Maxim Kouogun also impressed with a strong defensive debut.

The rest of the first half had the feel of two mid-table teams scrapping it out rather than a table-topping side visiting an out of form team.

Gateshead were unable to capitalise on any pressure they put on the Minstermen, with their attackers often forced to take shots from tight angles due to the home team’s compact defensive unit; Campbell in particular was unable to convert his free reign down the left wing into any real chances.

York City almost got their reward for a commendable first half, with a goalmouth scramble eventually ended by the opposition keeper.

The second half began with a penalty shout, with the referee waving away the Minstermen after McKay fell under pressure in the box.

The home side had the better chances early on, with the dangerous long throws of McKay and misplaced pass of the Gateshead goalkeeper gifting York chances that they failed to convert.

These aside,  it was a fairly even opening where both attacks were kept relatively quiet thanks to a strong midfield competition.

The Tynesiders did get the upper hand as the second half wore on, with the crowd energised in urging the Minstermen to withstand sustained pressure from the table-topping side.

Eventually, Gateshead broke through York City’s wall in the 75th minute, with Jameson’s impressive fingertip save to deny substitute Paul Blackett ultimately falling to Scott who had an easy tap in.

This lead was nearly doubled a minute later as the visitors blasted a shot over the bar and into the still-celebrating away crowd.

Yet it was York who got the final word in the 80th minute, as the Minstermen finally got something out of a set piece after Barrow’s free kick was heard across the box by Brown and put into the back of the net by substitute Clayton Donaldson.

The 37-year-old celebrated his tenth goal of the season in front of the 3,578-strong crowd, capping off a solid team performance that earned the team a respectable point.

While still sitting in 15th place, if the Minstermen can take this level of performance into the three games in hand they have over teams above them, there is hope the fans will have more to sing about in the near future.