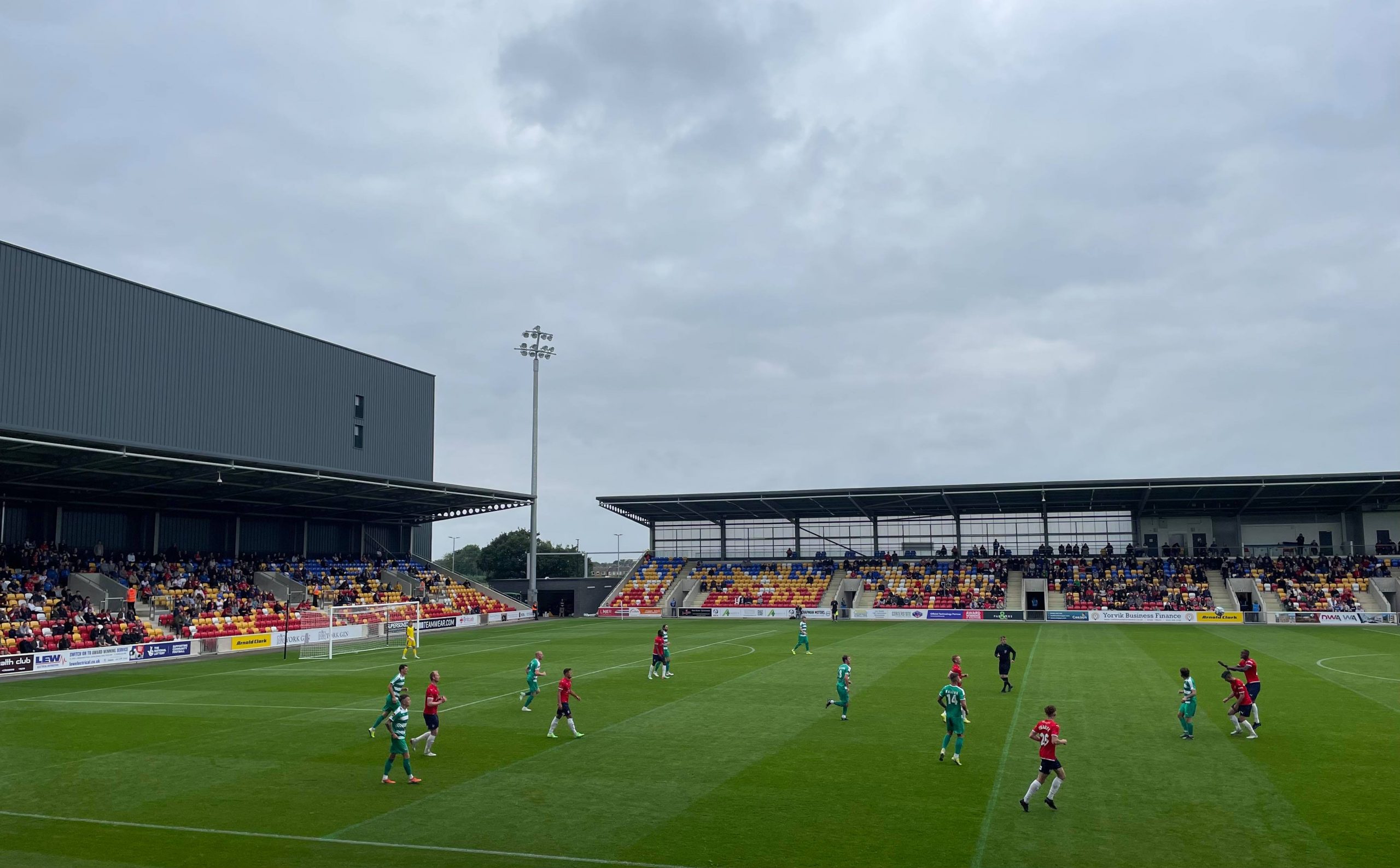 York City continued their rebound from a disappointing start to the season with a dominant win against previously unbeaten Farsley Celtic.

Donaldson’s 69th minute penalty was his first goal at home for the Minstermen since the end of his last spell at the club in 2007, and capped off a very different match to what York fans have been used to this season.

Optimism after York’s second place finish in 2020-21 gave way to a disappointing set of results in their first three games of the year, leaving them bottom of the National League North table.

With today’s win and Monday’s 3-1 win away at Spennymoor, they have now moved up to a more respectable 12th, one place behind Farsley.

Manager Steve Watson named an unchanged side, with winger Olly Dyson returning for a second game at right back in place of the injured Michael Duckworth.

Dyson and attacking left back Jadon Charles gave the Minstermen pace in attack down both wings, and York’s strong midfield dominated the middle of the pitch.

The match began quickly, with York looking for their first home win at the LNER Community Stadium.

Dyson and Charles created some early chances from the wings, but York struggled to convert.

Despite York’s fast start, it was Farsley who had the better of the early game, with two golden chances to take an away lead.

A 15th minute Farsley corner saw a chance for striker James Hanson at the back post, and some poor York defending forced a goal line clearance to keep them in the game.

It was keeper Pete Jameson who York had to thank for the game staying level, after a fantastic one-on-one save after Hanson broke through the centre of York’s defence.

Farsley paid the price for failing to make the most of their chances in the 23rd minute after sustained pressure from the Minstermen.

York striker Kurt Willougby gathered the ball with space outside the Farsley box, before firing an incredible shot into the bottom left corner and beating Farsley keeper Tom Donaghy.

Both sides settled down after York broke the deadlock, with Akil Wright creating a chance out of nowhere in the 30th minute after a tackle in midfield, collecting the ball from Donaldson and shooting, but Farsley keeper Donaghy was able to save at the near post.

After some half chances for York and Farsley, Mark Beck sent the Minstermen back to the changing room in the best possible style with a stoppage time goal.

Some Farsley defensive miscommunication gifted him the chance, and a looping shot past Donaghy doubled York’s lead.

The Minstermen started the second half in dominant fashion, as Donaldson almost gave them the perfect start after being played through on goal, but a slip meant the chance was lost.

York kept knocking on the door for a third, with a great Beck shot ruled out for offside and a powerful shot just over the bar from Donaldson after a driving run down the right-hand side.

As they settled into the second half, York began to sit further back and attack on the counter, and it was a counter that eventually gave York their third.

In the 57th minute, a run down the left side from Jadon Charles caused Farsley problems again, as he played in Donaldson to drive forward.

His ball from the left fell to an unmarked Michael Woods at the edge of the Farsley box, and he fired the ball into the back of the net for another York goal.

The Minstermen continued to press for a fourth, with two chances for Willoughby saved by Farsley’s keeper Donaghy.

That pressure paid off after yet another driving run and ball into the box from Jadon Charles, which hit a Farsley arm for an uncontroversial York penalty.

It was Donaldson who stepped up to take his second penalty of the season, and his first at the LNER Community Stadium.

He sent the keeper the wrong way and calmly slotted the ball into the bottom right corner.

A ball from James Spencer fell to Will Hayhurst at the edge of York’s box, and Jameson had no chance against a spectacular looping shot into the top left corner.

At some points it looked like York could be after a fifth goal, with a number of chances for substitute Mackenzie Heaney who linked up well with veteran Donaldson.

But it was Farsley who found their second goal of the day, after their corner was only cleared as far as the edge of York’s penalty area.

Jameson saved well to deny James Spencer’s header, but he couldn’t do anything to stop James Hanson heading the rebound into the back of the net.

Farsley continued to press for a third, and came close with an Adam Barton header from a corner, which could only get as close as York’s side netting.

But it was York who found themselves with the better chances in the closing minutes, forcing Donaghy into two strong saves, first from Heaney who found himself one-on-one, and then saving Gilchrist’s attempt to make the most of the rebound.

After a stoppage time scramble, with Heaney not quite being able to force a fantastic Donaldson ball into the Farsley net, the referee blew the full time whistle to confirm a 4-2 York win.