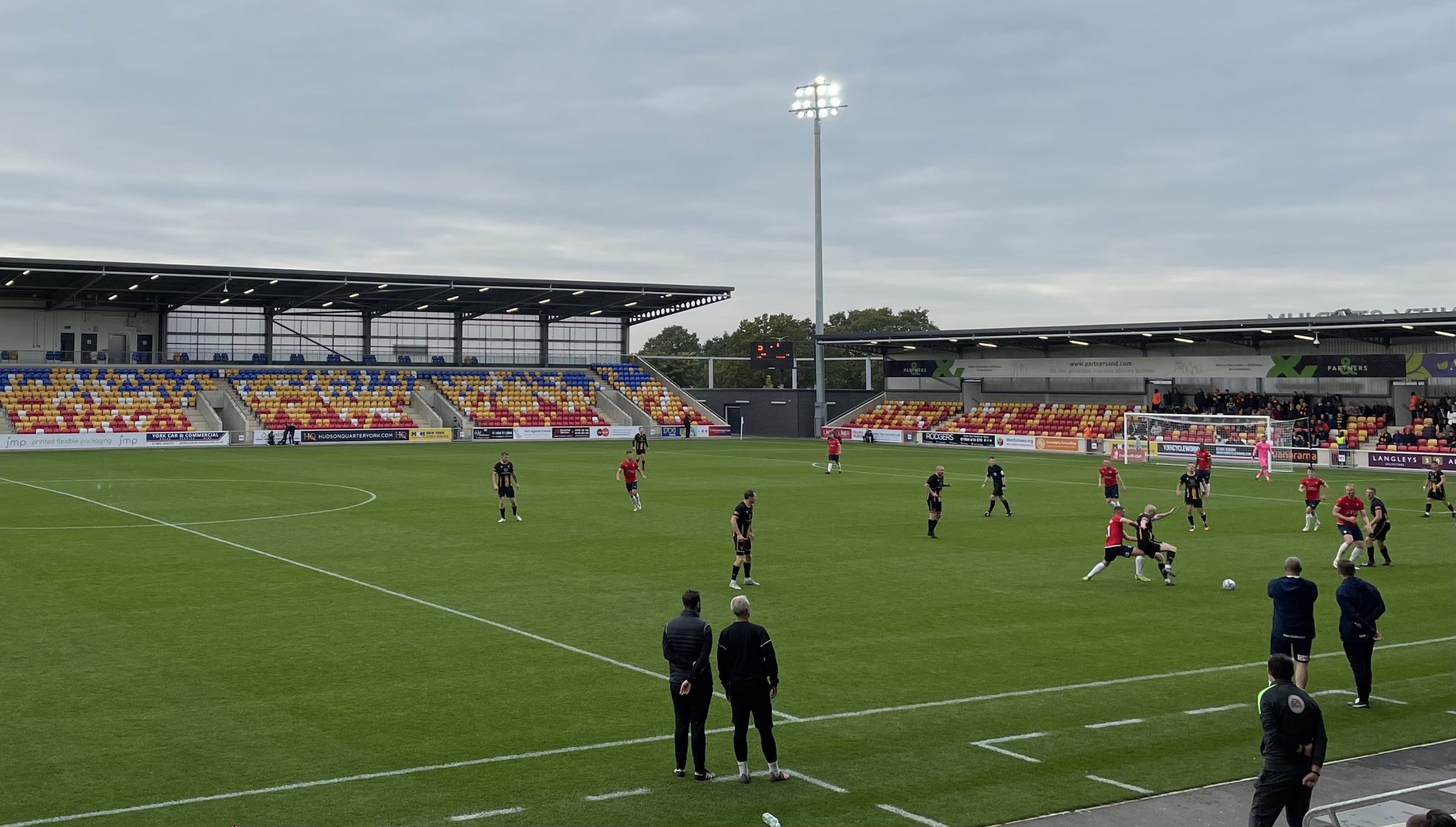 York City failed to find a way to win against semi-professional Morpeth Town and now face a replay on Tuesday evening.

After a first half in which the Minstermen were mostly on the front foot, a rejuvenated Morpeth side pushed forward after half-time to claim a draw and continue their hopes of a historic FA Cup run.

York will be disappointed that they couldn’t make the most of the first 45 minutes, but despite their pressure they failed to create many clear-cut chances.

Morpeth’s second half pressure looked like it could be contained, but in the end they were too much for a York side that looked to be flagging as they had the best chances of either side to secure the win.

The fourth qualifying round tie was a third straight cup match drawn against lower-league opposition for York, with Morpeth Town currently fourth from bottom in the Northern Premier League Premier Division.

Morpeth hoped to make club history by reaching the First Round Proper for the first ever time in what was only their second appearance in the fourth qualifying round of the cup against the toughest team on paper that they have faced in this year’s competition.

After a poor start to the season, York came into the match on the back of two straight wins, against Whitby Town in the FA Cup third qualifying round, before a 3-1 win against Southport in the National League North, as they moved up to 9th in the table.

The Minstermen were hoping to ride that momentum into the main draw of the FA Cup, with League 1 and 2 opposition waiting for them in the next round.

York started the game with a mostly unchanged team from that win, but with some notable changes including captain Matty Brown making way for Sam Fielding in defence.

Top goal-scorer Clayton Donaldson, who scored two against Whitby in the last round, started the match on the bench and was replaced by Mark Beck for his first start in three weeks.

York Manager Steve Watson made a second change upfront, as Kurt Willoughby was rested and Jason Gilchrist made his second start of the season.

The first half saw plenty of York pressure, but very few clear-cut chances for either side.

York attacked down both wings, with Ollie Dyson making plenty of opportunities down York’s right, but the Minstermen couldn’t create in the box.

Morpeth also pushed forward on the counter, finding success in long balls to Jack Foelle on their right wing, and it was Moelle who came closest for Morpeth early in the half, shooting just wide.

A ball to Foelle in the fourth minute forced York keeper Pete Jameson into action, as he left the box to fire the ball clear.

Akil Wright was a key part of York’s counter-attacking ability, and helped create a number of opportunities in the York wings.

In the 22nd minute it was Michael Duckworth’s cross from right back that created the Minstermen’s most threatening spell.

Mackenzie Heaney did well to collect the ball, before finding York’s captain Paddy McLaughlin at the edge of the box.

McLaughlin came close, but two of his shots were blocked before a cross across the face of the goal was cleared.

That wasn’t the end of York’s pressure, as they won a free-kick on the right hand side of the pitch.

Heaney made the cross from the free kick, which found Wright at the back post.

Wright did well to connect, heading the ball across the goal for Mark Beck to find the back of the net with a header of his own.

Beck’s goal, his first since York’s win against Farsley Celtic on 4 September, was well-earned after York’s attacking pressure, but it was the first clear-cut chance at a goal for either team.

The Minstermen began to sit deeper after that first goal, frustrating Morpeth by maintaining possession in their own half.

But York continued to have pace on the counter, and looked threatening as another long, slightly hopeful, cross was just too much for an unmarked Beck in front of goal.

Morpeth had the next best chance of the half, and inevitably it came from a long ball forward to Foalle on the right wing.

The ball was pulled back to Sean Taylor in the box, who forced Pete Jameson into a strong save low to his left-hand side.

York continued to threaten, and just before half time a menacing ball in from Heaney forced Morpeth keeper Daniel Lowson to come out to the edge of the box to punch the ball away.

The Minstermen would go into half time with a deserved lead, but not a comfortable one.

It was a familiar start to the second half, as York pushed forward but couldn’t make it count.

Morpeth broke away and almost found an equaliser, again through Foelle beating his man on the right wing.

He crossed the ball into the box, and it was a goal line clearance that stopped Ben Sayer from finding a Morpeth goal.

Morpeth continued to create opportunities, looking the stronger team at the start of the half, Andrew Johnson firing just over the crossbar after being forced off balance.

Despite some chances from York, they still weren’t able to find anyone in the box and make them count.

In the 61st minute, Watson made his first change, ending what was a quiet night for Jason Gilchrist upfront.

Morpeth kept pushing for an equaliser, and in the 74th minute they were able to turn their strong performance into one.

A Morpeth long throw came across goal from the left hand side, and Ben Sayer was able to send the 273 Morpeth fans who made the trip wild with a header at the back post.

The Minstermen still couldn’t find an answer to the pressure, with a Liam Noble shot forcing Jameson into a save to his left.

York looked to have finally found a winner in the 85th minute, as Kyle Lancaster, making his first team debut, brought the ball back for Heaney on the edge of the box.

His ball found the prolific Clayton Donaldson, on to replace Beck, who headed into the back of the net, but the goal was disallowed after a close offside call that was controversial with the home fans.

In added time, it was Morpeth who came closest to finding a history-making winner, as substitute Christopher Reid played the ball to Ryan Donaldson at the edge of the box.

Donaldson’s looping shot was tipped over the crossbar by a diving Jameson, bringing the Morpeth bench to its feet for a final chance at the corner.

The corner was headed clear, before a final long throw was punched away by Jameson.

In the end, neither side quite found the win, and York avoided an embarrassing home defeat.

A draw at home won’t fill York fans with confidence before Tuesday’s replay, and the boos all around the LNER Community Stadium at full-time said it all about their views on their team’s performance.

On Tuesday, Morpeth will be hoping to find a win in front of their home fans, and find some Football League opposition in the First Round Proper.

York and Morpeth will be watching closely on Sunday afternoon, as the First Round draw will decide the stakes for Tuesday’s replay.