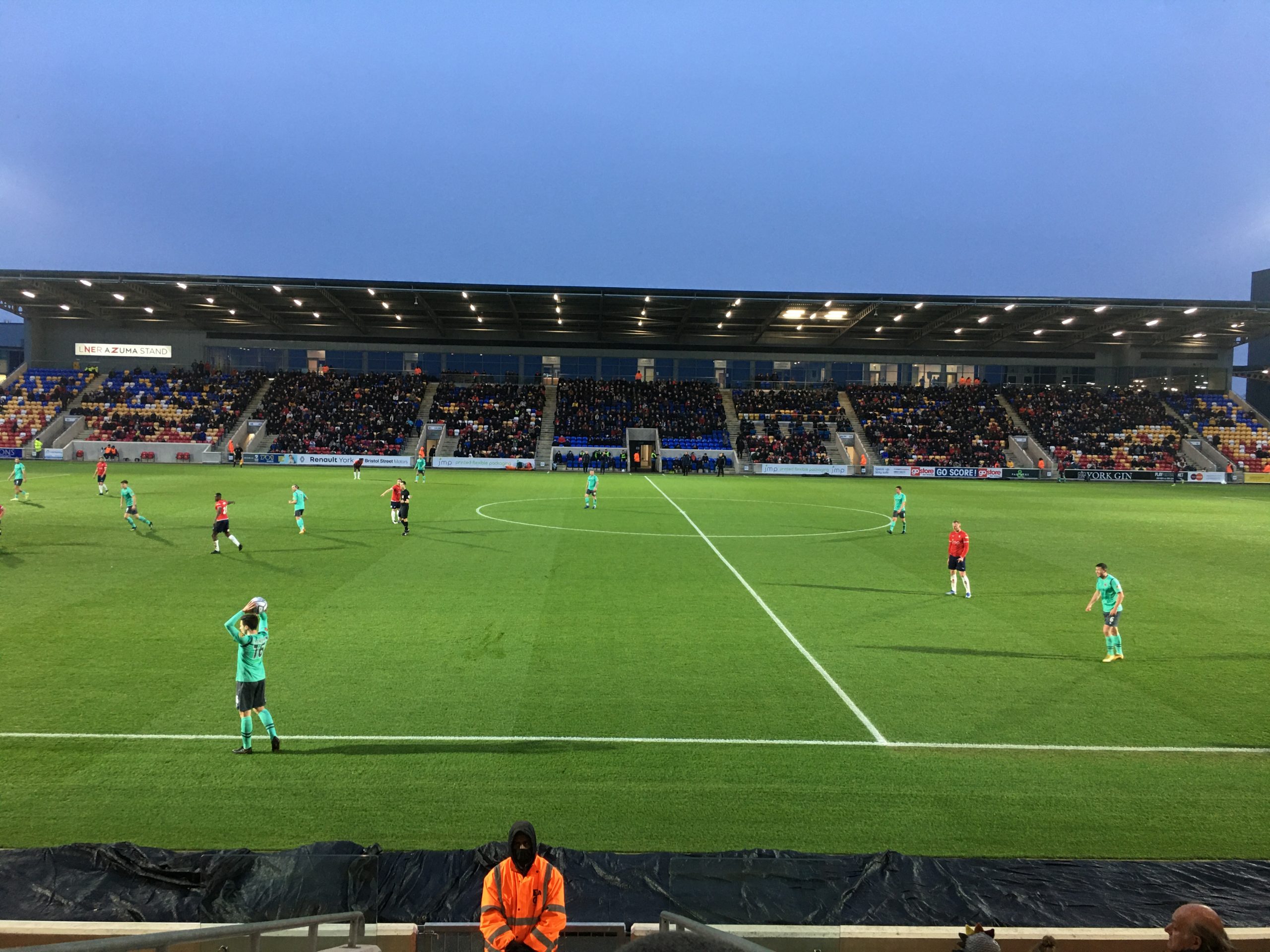 Over 4,500 supporters filled the stands on Saturday as York City took on Chorley in a competitive league game rife with controversial officiating and fan uproar.

The first half saw York applying pressure until a 34th minute red card slowed the Minstermen down and allowed for a Chorley come back.

The first half was competitive from the whistle, with York attempting a free kick in the first minute and Chorley coming close with a header in the third.

York kept on the pressure with Kurt Willoughby firing in a strike barely saved by the Chorley keeper in the ninth minute.

In the 10th minute, the game was temporarily suspended and the players were removed from the pitch, when Minstermen fans chanting in protest of club chairman Jason McGill, “we want our club back” began throwing tennis balls and toilet paper onto the pitch.

Following this a fan ran onto the pitch, escaping security guards and reentering the stands.

York took the lead in the 11th minute, when a cross from the left was headed in from close range by Akil Wright.

A second chance came quickly for York and in the 14th minute, Willoughby went down in the penalty area to unsuccessful cries for a penalty by York Players and Fans.

In the 34th minute, defender Matty Brown was given a straight red card following the protests of Chorley players.

In the 39th minute, Chorley equalised with a thunderous free kick from the edge of the 18 yard box following another controversial decision.

An additional controversial booking decision came just before half time with captain Sean Newman getting a yellow card in the 45th minute.

The second half was just as competitive as the first; however, regular interferences from the officials impeded the flow at times.

The second half began with a substitution, Donaldson off and King on.

In the 53rd minute Hancox almost broke the deadlock after heading a cross from Beck towards goal.

In the mid second half, the Minstermen were playing deep into their own half, a tactic that almost cost them the game when Chorley strikes were almost converted in the 67th and 68th minutes.

An additional York yellow card came in the 71st minute with Kieran Wallace getting in the referees book.

In the 72nd minute City a free kick in the final third, following a foul on Willoughby.

The free kick was almost headed in by King.

Another excellent save from Jameson came in the 78th minute, after a powerful Chorley strike from outside the 18 yard box.

In the 83rd minute following a poor Chorley strike into the stands, a young York fan ran onto the pitch to take a selfie with goalkeeper Pete Jameson.

Following 5 minutes of fairly uneventful extra time, the game came to a close and York managed to hold Chorley to a draw with only 10 men.

Overall, today’s performance by the Minstermen was pretty solid and one to build upon, with Willoughby and Jameson’s performances being of particular note.