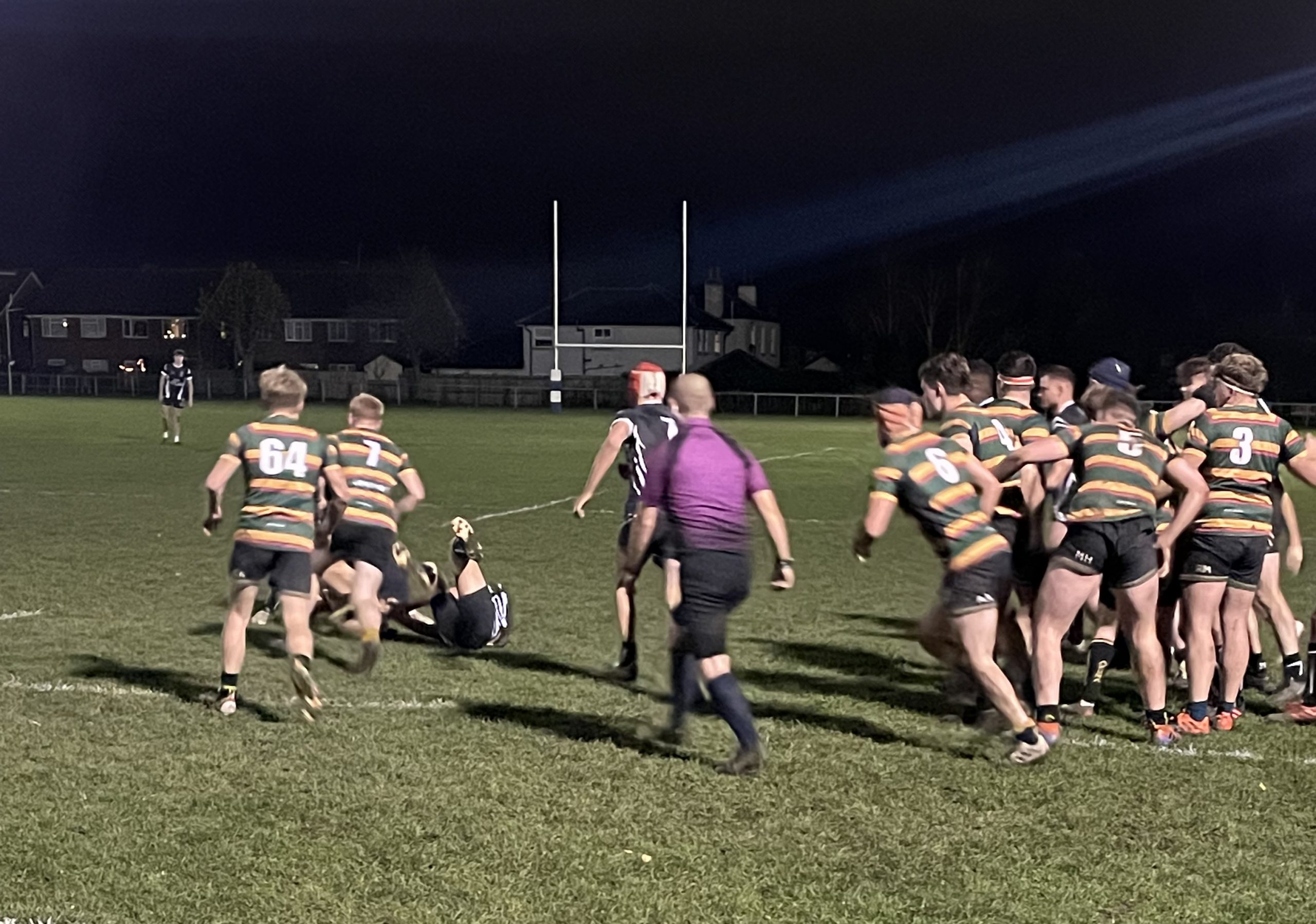 A late Joe Robson try made the difference in a close, scrappy match, as Hes East secured a 7-5 win over James in the club’s Spike Aware UK charity game.

An estimated crowd of 300-400 people attended the match, co-hosted by campaign group The Last Taboo York.

Both teams had sustained periods in which they were on top of the match, but often struggled to take advantage, with strong and fast defensive lines absorbing much of the pressure they faced.

Much of the first half saw James on top, and while Hes East were able to withstand much of their attack, there were some great moments of play that created opportunities for points.

It was one of those moments that created the first try of the night, as Tom Davis’ break through the line was stopped by a last-ditch Hes East tackle into touch.

James won a scrum at the five yard line after the throw from the lineout wasn’t straight, and James Lancaster broke a tackle to make up even more ground.

Hes East’s fast defensive line forced James back to the edge of the 22, but a flowing passing move delivered the ball to Henry Cullens on the left wing, who scored in the corner to give James a 5-0 lead.

James looked to keep up the pressure, as another penalty gave them an opportunity in Hes East’s 22, which full-back Harry Clamp nearly took advantage of with a run to the five yard line.

From there, it looked like James’ forwards were confident in their ability to put another try on the board, despite increasingly frustrated calls from their backs, who had a massive amount of space down the right-hand side of the pitch.

After the ball was lost forward to end James’ run in attack, the game started to settle, with both teams having periods on top, and it was Hes East who ended the half strongest.

A series of offside penalties were given away by James, giving Hes East two chances to kick to touch in the corner.

Right in the closing moments of the half, a short lineout from Hes East got them close to the line, but James’ goal line defence held up and eventually did enough to win a scrum and end the half.

The second half saw Hes East come out as they ended the first, piling the pressure onto James in an attempt to maintain their 16-month unbeaten run.

Chance after chance was stopped by a James defence that was throwing everything into maintaining their lead, but eventually Hes East thought they had pulled back an equalising try.

A lineout at the five yard line saw Hes East go for a maul to try and get over the line, and eventually they did break through, and a try was signalled by the referee.

The celebrations didn’t last long however, as the assistant referee flagged to award the scrum, ending a sustained attacking run of play for Hes East.

Hes East kept creating opportunities, and their pressure did pay off just before full time, as Hes East won a penalty just inside the 22 for a high tackle.

Hes East pushed within five yards of the line yet again, but this time the ball came to scrum-half Joe Robson, whose diagonal run saw him score straight underneath the posts to tie the game.

Despite the pressure of the match on him, Jonathon Jelfs calmly slotted the conversion through the posts to end the game at 7-5.

Friday’s event was about a whole lot more than rugby, and founders of Spike Aware UK Mandy and Colin Mackie had travelled from Scotland to watch the game.

They set up the charity after their son Greg died at university in Edinburgh, after his Coca-Cola was spiked with the equivalent of five ecstasy tablets.

Colin told York Vision: “What we really want is people taking a bit of knowledge about it, you know, they go home and hopefully they’ve enjoyed the game and they think about it now.

Mandy said: “Today is what puts a smile on our faces. Losing our son and campaigning the way we have, this is what does it for us.”

The Last Taboo York President Imogen Horrocks said that teams like Hes East getting involved in raising awareness around spiking was really important.

“I think, kind of up until now, it’s been a very one-gender conversation, it’s very heavily focused on women, it’s generally women who are the voices for these things.

“Hes East doing this is a fantastic starting point for a collective shift in club attitudes, and we’re really grateful to be able to work with them.

“We’re really fortunate to be able to work with them on something like this, and start setting a precedent for a change in attitudes.”

Hes East Rugby Vice Captain Josh Hattersley said that the cause was a very personal one for the team, telling Vision: “It was around when the boycott was happening, and it had just come to our attention that one of our players had been seriously quite badly spiked and was hospitalised because of it.

“We were saying that we wanted to do something to kind of show our support for him.”

Morgan Willetts, President of Hes East Rugby, told Vision he hoped this event would be the start of even more support for charities from college sport.

“I’m hoping with this event, that it will become an annual event and every year a different charity will be chosen to support and that we can just continue showing what college sport can do when the whole college sport community comes together.”

James Rugby President Harry Cullens, speaking to Vision, said the teams were keen to challenge the reputation that sports clubs have had in the past.

“I think, especially as a rugby club, there’s definitely some sort of reputation that some boys get.

“I think we’ve all definitely bought into the system and we fully support the movement, we supported the boycott movement, where none of us went out.

“I think we’re keen to get rid of that reputation.”

It may not have been the highest scoring game on the pitch, but off the pitch the GoFundMe for Spike Aware UK has broken through the £1000 fundraising target.

York Sport Union President Franki Riley said: “Our university sports groups are always one of the first to get behind campaigns such as spiking awareness, and have a huge impact on student activism.

“I’m so proud that once again our student sports are leading this and I hope that we can continue to channel this positive energy into long-lasting change.”

In front of one of college sport’s biggest crowds, Hes East and James delivered some great performances, and showed that some things are more important than sport.