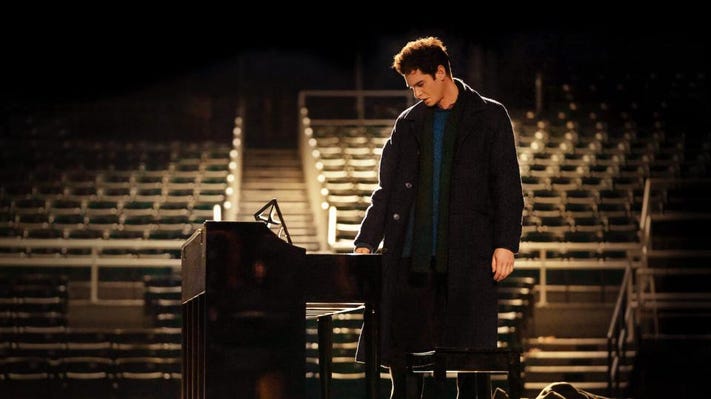 Andrew Garfield has had a busy few months, starring in and promoting the new movie musical Tick Tick … Boom (2021), while avoiding sneaky Spider-Man questions. And alongside his ‘spider-like’ dodges, Garfield has also presented one of the most honest acting performances of the year, bringing legendary Broadway composer Jonathon Larson back to life on the big screen.

Tick, Tick … Boom is a semi-autobiographical musical, initially written by Jonathon Larson in 1991, as he struggled through the trials and tribulations of ‘making it’ in the theatre industry. Larson went on to create the iconic musical Rent, however he suddenly died before he ever saw the true success and impact of his work.

And now, in a wonderful display of the collaborative power of theatre, Larson’s first successful work has returned to the spotlight through the efforts of both his peers and musical descendants.

The creative process for this film started 30 years ago when Jonathon Larson wrote the initial workshop version of Tick Tick… Boom (initially titled 30:90 and Boho Days). This effort then continued through the years, long past Larson’s death, as David Auburn adapted it to a three-act musical, directors staged off-Broadway and international revivals, Dear Evan Hansen writer Stevenson adapted the screenplay for the film, and Hamilton composer Lin Manuel Miranda signed on to direct.

We could praise the direction, score, musical sequences, and acting all day (all of which are quite spellbinding and wonderfully executed), however, the film’s real magic comes from the intersection of theatre legacies it personifies. Larson’s work on Rent and Tick Tick … Boom paved the way for the current era of musical theatre, and directly inspired Lin Manuel-Miranda to pursue work in the industry, with Lin thanking Larson, “someone else has permission to tell their story because you told yours.”

Both director and subject share a common necessity for the art of composing, with Miranda imbuing every frame of the film with his honest passion for theatre.

From the gentle imagery of the writing process to the raw depiction of a demanding Broadway industry, Tick Tick …Boom absorbs audiences into the struggles and passions of composers, at a time when we are so grateful for the continuing survival of music and live theatre.

Miranda also packs the film with theatre icons past, present, and future, allowing them the chance to personally honour and thank Larson and the theatrical impact he created. Cameos include Larson’s inspirations and mentors such as Bernadette Peters and Stephen Sondheim, Larson’s creative peers James C. Nicola and Roger Bart, the original Broadway cast of Rent, and direct descendants of Larson’s work including a range of current Broadway stars, composers, and Lin Manuel-Miranda collaborators.

The last recording of the late Stephen Sondheim adds particular significance to the piece, in a beautifully self-aware moment where the legacies of three composers past (Sondheim), present (Larson), and Future (Miranda) intersect, and Miranda gains the unique opportunity to formally honour the impact of those who came before him.

With its long-running creative team, the significance of onscreen cast members, the emerging theatrical talent of Garfield, and the new generation of theatre fans the film may so inspire, every aspect of Tick Tick … Boom displays an honest and sincere love and admiration for the legacy of Larson and the theatrical industry he represents, to the extent that this is truly a love letter from theatre to theatre. An intersection of legacies and musical passion, the film pushes past narrative boundaries to directly thank the community, praise the collaborative nature of the industry, and call out to the future generation of theatre stars and composers, “on to the next”.

As Jonathon Larson one wrote, “What a great way to spend a day.”