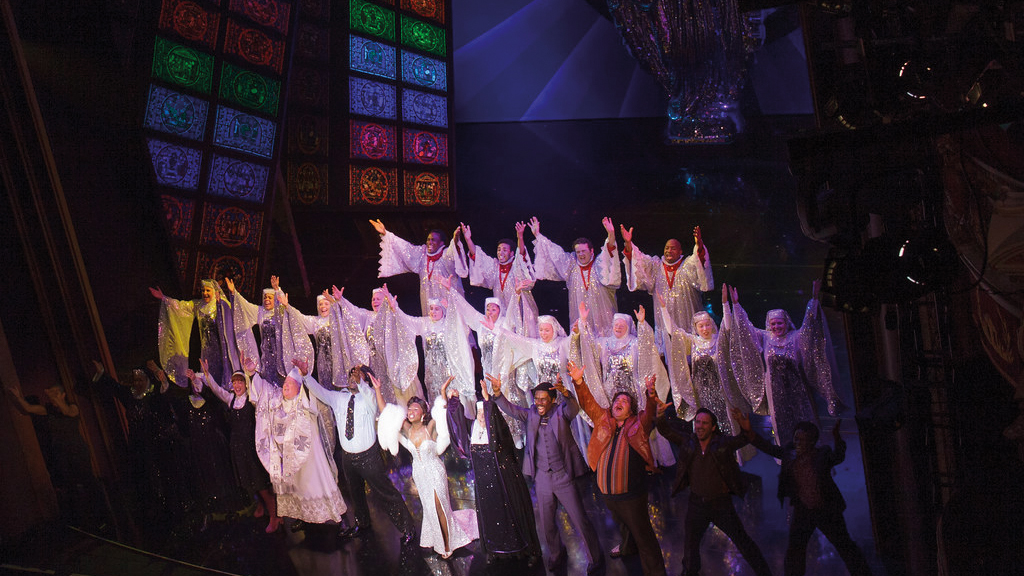 Over the years, the tone of semi-religious musicals has changed. I say semi-religious because they don’t exactly play out scenes from the Bible (Jesus Christ Superstar being a bit of a grey area), yet they still engage with the topic of religion. As if this wasn’t enough to make them worth watching, musicals such as Fiddler on the Roof, The Book of Mormon, and Sister Act also credit themselves as comedies to varying degrees.

However, whilst Fiddler on the Roof provides a barrel of laughs, its stark portrayal of Jewish oppression proves its central message to be far more sobering. Contrastingly, more modern musicals like The Book of Mormon rely entirely on satire in order to convey their heart-warming message (warning: you have to have a fairly dark sense of humour in order to find it). Then there’s the middle ground – Sister Act, which debuted on the West End in June 2009.

Sister Act deals with Catholicism in a distinctly positive way, telling the story of a woman who gains witness protection amongst a sisterhood of nuns. The musical portrays these women as devout in their faith, yet also celebrates their individual personalities; they don’t simply live up to preconceived stereotypes.

The message at the heart of Sister Act is pretty much what the title says – sisterhood. Unlike other musicals, the show focuses its attention on a group of strong-minded, intelligent and capable women who support and protect each other.

It doesn’t rely on mockery to bag some laughs (I’m looking at you, The Book of Mormon), but instead achieves its laughter from endearing characters and witty lines. It also doesn’t slap us in the face with the harsh reality of life, but rather addresses issues of sexism and violence in a subtle, yet resolute way.

Don’t get me wrong, Fiddler on the Roof and The Book of Mormon are exceptional productions – ‘If I Were a Rich Man’ and ‘Spooky Mormon Hell Dream’ are essential to any musicals playlist – but they don’t quite appeal to the masses like Sister Act. The show is a vibrant production with some seriously loveable characters; they’ll make you laugh, cry, and shout hallelujah! Regardless of your comedic, dramatic, or religious preferences, Sister Act delivers something for all to enjoy (and who doesn’t love some singing nuns).

Maybe it’s my inner raging feminist talking, but Sister Act, as a literal act of sisterhood, truly deserves all the praise it can get. Therefore I pray of you: if you haven’t seen Sister Act, go forth and do so.