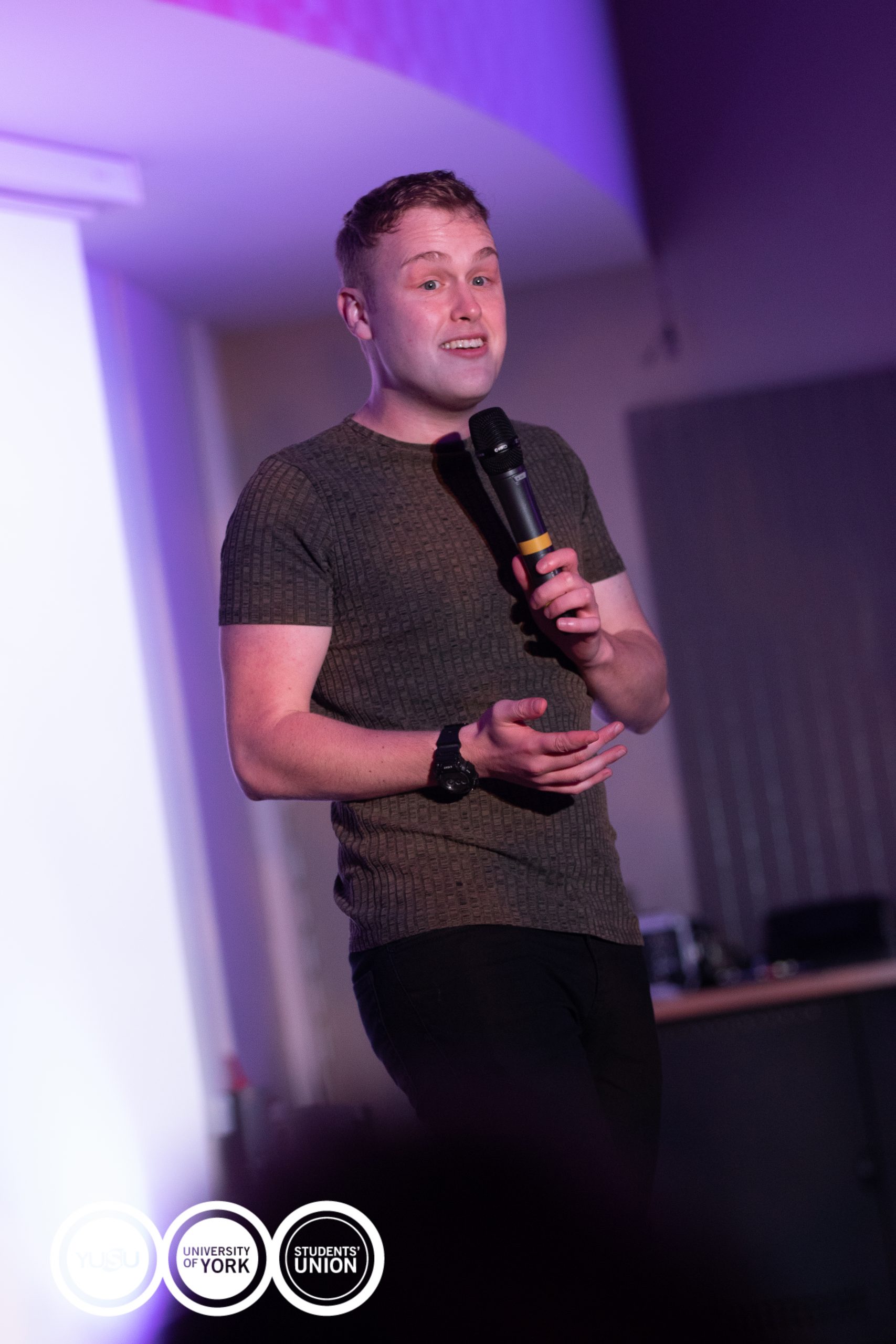 I didn’t really have the highest hopes for YUSU’s Comedy Night.

The Facebook event listed a starting time of 7pm, so I, the dedicated journalist that I am, arrived promptly at the door on the hour, to an empty venue and a queue of about four people. Great. I went in, got a drink, and sat down.

About an hour and a half later, and still to a less than stellar crowd (the doorman told me that the place was sold out, but the venue looked to be a third full at best), the first comedian stepped on. He had a pretty tough job ahead of him. I was a tiny bit tipsy, more than quite tired, and exceptionally bored.

But fuck me did I have a good time.

The first comedian was Josh Jones: a raging Mancunian, unstoppably camp, and absolutely hilarious. He picked up the vibe of the audience immediately, and tailored both his jokes and audience interaction to the group of slightly nervous and hesitantly excited freshers. I won’t lie, I had sort of forgotten that people are allowed to make jokes about sex and drugs and wanking, so hearing someone on stage talking about shoving his “cock in someone’s mouth” was utterly liberating.

It was very clear that his material had been honed on audiences much tougher than us. His anecdote about an old man “turning his back to him” upon the discovery that he was gay was sobering to hear, until Josh’s revelation that he might’ve just been “presenting his arse to him” in accordance with what he believed was gay custom. The crowd also absolutely loved his jokes about knowing that he could’ve beaten up his ex-boyfriend if he wanted to.

He picked on people accordingly (he was never unnecessarily mean, but gave people the right amount of shit) and talked candidly about the realities of university to the wide-eyed freshers. His line about this being “the first year that most of them will suck cock” got a huge laugh.

His stage presence was immediately comforting and magnetic, and the way that he pivoted from improvisational, audience-based jokes to rehearsed moments was absolutely effortless. I often found myself marvelling at how what appeared to be an off-the-cuff story often ended in an absolute gut-punch of a conclusion, clearly showing how well-rehearsed – and well-written – his stories and jokes were.

Louise Young brought some more neurotic energy to the set, and very successfully navigated around a member of the audience who very clearly did not want to be heckled, as well as a very bizarre interlude where someone felt the need to tell the rest of the audience that the straw wouldn’t go into the hole in their plastic cup (classic York).

The night was filled with a lot of Geographical jokes. Both Josh and Louise spent a lot of time on their respective Mancunian and Turkish-Geordie heritages, which culminated beautifully in Louise’s joke about being “genetically predisposed to wanting a kebab”.

While it’s all been fun and games so far, I did have to groan to myself a bit when pandemic jokes began to be introduced.

I do realise that the pandemic was, invariably, a huge part of everyone’s lives over the past 2 years, but if I hear about it one more time – how great it is to be back in person, how crap Zoom is, how reclusive and strange we all became – I will unleash a new virus upon this world. Everybody knows! Everyone knows every detail of this pandemic. We were all there. We all did it. It was shit. We know. None of us want to hear about it. Whether it was through our parents’ offensively out-of-touch memes, insufferable TikTok trends, or the latest ‘thinkpiece’ on how the pandemic is changing how we do ‘this’, I know that every possible avenue of the pandemic has been explored to death.

To the comedians’ credit, the number of pandemic jokes was evidently curtailed. I reckon that they occupied about five minutes of Louise’s thirty-minute set. But It’s still five minutes too many. As well as this, her constant fidgeting, rambling, and time-checking was a little bit grating. Still, a minor blip on what was generally a great set.

The headliner, Suzi Ruffell, certainly made herself known. Her brand of comedy was much more physical (at one point she trust fell onto the floor before rolling back onto her feet), which I wasn’t sure that I was in love with. But I can’t deny that she erupted onto the stage with electricity. If I was tired before the gig started, I certainly wasn’t now.

The most memorable moment of her set was her extended story about her adventure onto the Tipping Point set, which involved calling her dad in tears, cling-filming her car (“fuck the turtles” got a great response), and chucking a bloody rag at Ben Shephard, who apparently smelled as good as she imagined he would.

If I was a fresher (I can only dream), the night would’ve immediately set the tone for what University is like. This isn’t home anymore, and this isn’t school either. I went home with a newfound smile on my face.