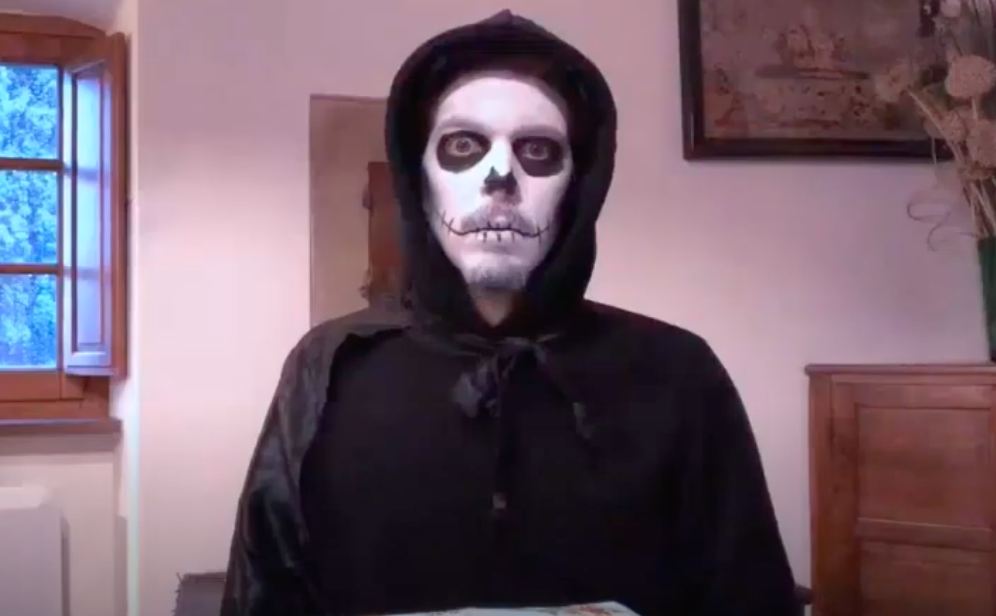 If you have a spare moment and are tired of browsing through Netflix, check out thespaceuk.com. The SpaceUK is hosting an online festival and offers us a choice of over 50 comedies, dramas, and musical performances to watch online. Among those is York DramaSoc’s production Over On Grim Street.

Written by UoY Alumnus Lucy-Jo Finnighan, originally performed at the Fringe festival and adapted for today’s online world, this 50 minute performance is rather impressive.

We follow Tabitha (Kit Clark), a widow in her eighties, about to have a nice breakfast when she receives a most unusual visit from Death, who she calls Grim (Filippo del Bo). As he assures her that he isn’t here to take her away, she offers him a cup of tea. Over on Grim Street is the moving story of Tabitha’s friendship with death.

It soon appears that Grim, who is tired of killing people, is having an existential crisis, and that Tabitha has trouble getting her spirits up since her husband died. She misses her son Dave (Will Goodwin) who always seems to be too busy to visit her, she doesn’t know whether her supposedly best friend Doris (Laura Livingston) is actually a good friend, and she’s trying to deal with a crush on Harry (James Mason).

The team did a great job at adapting the play for an online festival. All the actors filmed their part from their home. The plot is built on FaceTime calls. We see Harry, Doris, and Dave through a smartphone screen, in a FaceTime format. The whole performance is really well put together, but still, this distance means that you can only ever see one character at a time. Would I call the show theatre? Probably not, but I would definitely call it drama.

The representation of death is very classic as it follows typical allegories, but it works. Filippo del Bo manages to build an evolution in his character, from very solemn and cold, to slightly more relaxed and warm as he talks to Tabitha. Laura Livingston as Doris is exuberant and brings a bit of excitement to the show, not that it needed it as Kit Clark’s performance is very enjoyable and welcoming.

My main disappointment whilst watching the play was the cliché and rather uninteresting representation of elderly people. Clichés such as Doris needing to put huge glasses on, or Harry not understanding today’s music industry don’t bring much to the show and are also quite incoherent with the FaceTime format of the conversations. For example, if Harry knows how to FaceTime Tabitha, he would know he can’t give her flowers through the screen, and he would know whether ‘records’ still exist. In fact, he would probably call them CDs. Hence, the cliché representation of elderly people is not very interesting and contradictory with the FaceTime format. The play doesn’t depict old age in an original and in-depth way.

However, this play, which reminded me of Judith Kerr’s children book The Tiger who came to Tea, is overall very sweet. Lucy-Jo Finnighan did a fantastic job at adapting it to an online format.