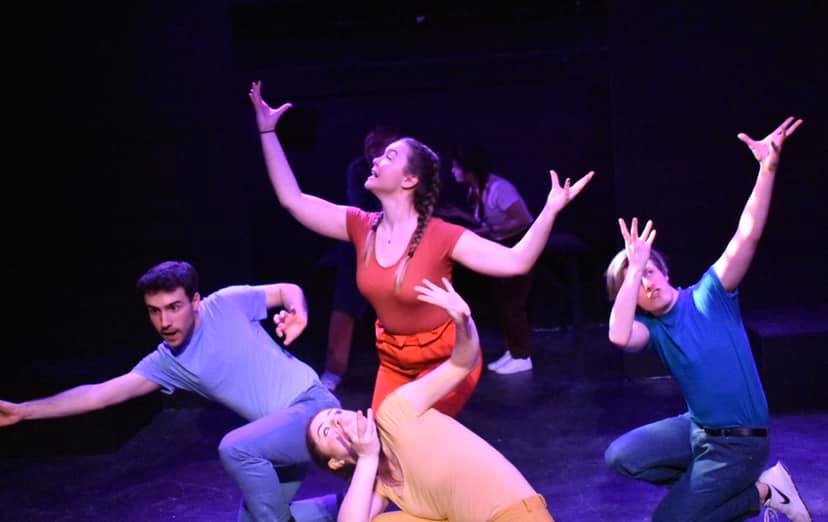 From the second the projectors lit the stage, I knew I would love DramaSoc’s Alphonse, directed by Ella McKeown. Six actors are curled up in a circle. They start dancing on the voiceover of someone talking about how a kid wouldn’t recognize the adult version of his person, and vice versa. The dance is an elegant alternation of soft and energetic movements. A dance full of accents. The voice stops talking.

‘Hi! I’m Alphonse’s brother’ says Dean Murphy very loudly, chest swollen. ‘Alphonse has gone missing. We’re all a bit worried about him.’ So the brother introduces himself and his family. By doing that, he destroys the fourth wall at the theatre (the one between the front of the stage and the audience). Most of the artistic value of this play written by Wajdi Mouawad comes from its narration. A lot of the time, the actors talk directly to us, telling us the story of Alphonse.

Alphonse is a schoolboy who wakes up every night to meet with his imaginary friend, Pierre-Paul-René. Together, they go on fabulous adventures in the land of Pastryburg. One day, Alphonse goes missing. A police officer starts investigating the case, speaks to all his classmates, and soon realizes that if he wants to find Alphonse, he’d better look in the invisible world.

The narration plays with us, jumping from one universe to another, from fantasy to reality, from Pierre-Paul-René’s world to Alphonse and his family’s. It runs across temporality, juggling between past, present, and future. Hence why the narration is so important.

Imagination seemed to be Ella McKeown’s breadcrumb trail. Her directing did not aim to be so realistic that the audience could identify with the characters. Rather, her goal was to boost our imagination in order to follow Alphonse in his dreams. The aesthetic she chose for the whole play was quite innocent and pure, like children. Every character had one particular feature that was exaggerated as much as possible, exactly like in a child’s mind.

All characters in Alphonse have one distinctive feature: the mother (Orla O’Hagan) has an apron on, the father (Tom Mason) wears a tie, the brother (Dean Murphy) has glasses and the sister (Laura Maddison) a collar. The actors also played with accents, exaggerating them for the evil character of Flupan (Alfie Howle) or for François the retired neighbour (Valasia Dogka). Whenever they are not talking, all the members of Alphonse’s family freeze in ‘tableaux’, an over-reacted expression on their face: the mother weeps in a Shakespearian way, a hand to her forehead, the son freezes with a shocked look in his face, a bit like cartoon characters that have their eyes popping out – that’s it! The aesthetic of the play was quite close to that of cartoons!

The very light-hearted and jolly music also contributed to this. Alphonse’s girlfriend, Pierre-Paul-René’s adventures, the police inspector: they all had their own music (the police officer’s musical theme reminded me of the music in Scooby-Doo). Everything was charmingly over-reacted in a very innocent and pure way, a bit like in a kid’s mind.

The decor fantastically contributed to help us boost our imagination. This is the story of a little boy who lies in bed at night and who embarks on fantastic imaginary stories with his imaginary friend. Hence the set was all black, like a bedroom once the parents have kissed you good night. All there was on the set was a coat hanger with a few hats and jackets hanging from it. Because nothing was on the set, the actors had to act out everything: the wind, the forest, the cave, the car, the lift … forcing us to boost our imagination to follow Pierre-Paul-René in his adventures! The team’s creativity gave birth to really beautiful moments and had all seven members of the cast dancing along as the plot unfolded.

Alphonse was a strong artistic statement coming from Ella and her team. All members of the cast overflowed with beautiful energy. It was refined, charming, innocent, original, and cute!