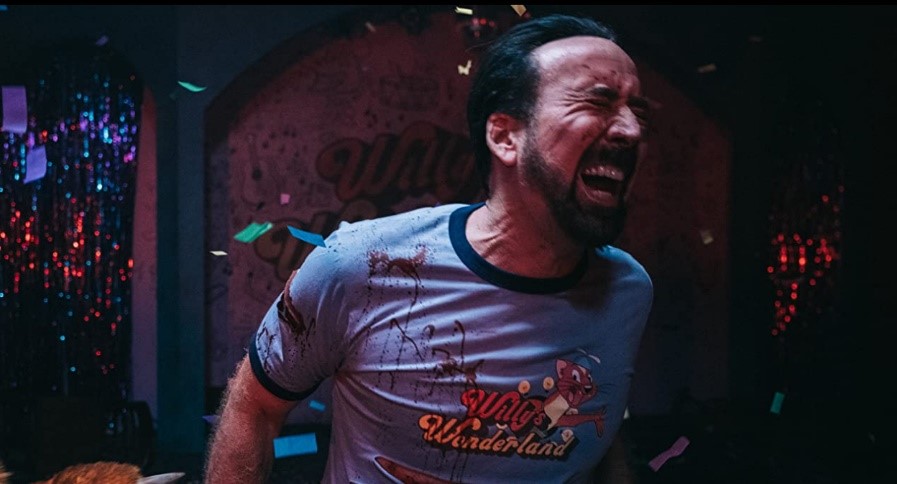 Five Nights at Freddy’s meets The Funhouse, Nicolas is released from his cage in a brainless blood-fest, destined for cult success and begging for mainstream frustration.

Willy’s Wonderland is the latest venture into the deranged world of Nicolas Cage. Having taken dubious inspiration from the Five Night at Freddy’s franchise, this comedy/horror is Cage’s ‘face-off’ with animatronic robots. Bizarre doesn’t even begin to describe the narrative which ensues, featuring Cage’s silent character The Janitor, an ‘Army of One’ who cleans the ‘Wonderland’ while fighting off a host of creepy, animated enemies.

Directed by Kevin Lewis, who over the past 20 years hasn’t exactly changed the face of cinema with his contribution of average-at-best thrillers, Willy’s Wonderland is a pretty terribly made film. Clearly with a budget of Nicolas Cage’s salary and 10 quid on top, it tiptoes the thin line between good-bad and bad-bad. For the majority of the film, we laugh with Cage and his crew, rather than at them, which is a vital distinction to make for a film of this sort.

With the potential of a B-movie feast, the film subverted expectations, delving into a special genre of film, the ‘C-movie’ (Cage movie). We recently saw him determining the fate of mankind in Jiu Jitsu (2020), a similarly bizarre flick which packs half the fun and double the tediousness. Willy’s Wonderland delves more aggressively into the insane, featuring a twist on the American History X (1998) ‘curb-stomp’, this time involving a gorilla and a urinal. Also featuring a montage of Cage cleaning to smooth jazz, the film doesn’t hold back on the seductive on-screen magic which Cage is known for.

In all fairness, in times of uncertainty and isolation, watching Nicolas Cage mercilessly kill a model flamingo-esque creature to the sound of thumping metal was something I enjoyed.

I don’t want to give away too much. But, with sections dedicated to Cage cleaning, dancing, and playing pinball, it seems Willy’s Wonderland has stumbled upon a potential goldmine of the documentary genre: ‘A day in the life of Cage’. In which he spends most of the time looking at everyone else as if they’re the crazy ones. I like to think he’s right.

In 1990, Akira Kurosawa received an honorary award at the Oscars. On-stage he humbly said “I don’t think I quite understand cinema yet”. Rest easy Akira, with Nicolas out of his cage, we are in safe hands. It may be with Willy’s Wonderland we have finally found the answer. Or maybe not.