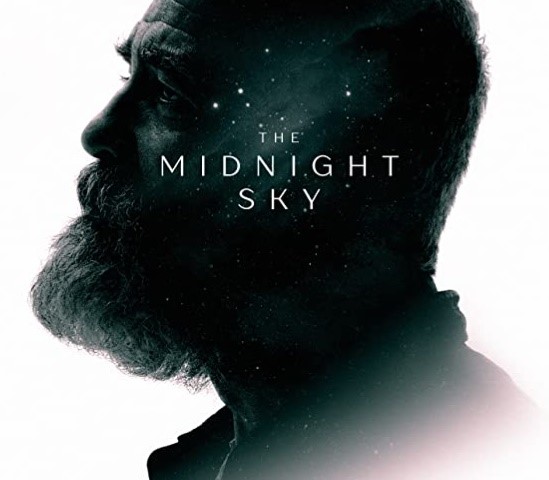 George Clooney stars and directs in a new post-apocalyptic, sci-fi tale. Occasionally visually striking but regularly boring, the film is halted by a weak script and emotionless story.

Recently released to Netflix, The Midnight Sky had all the hallmarks of a science fiction festive treat. I sat down to watch this film in the unusual period between Boxing Day and New Years Eve. The strange “between” is a vacuum of tiredness, confusion, and sometimes boredom, which is exactly what this film felt like.

Based on the book Good Morning, Midnight by Lily Brooks-Dalton, The Midnight Sky follows two storylines. After a cataclysmic event destroys most of Earth (the details of this are left unclear) Clooney’s character Augustine is left stranded due to his terminal illness (the details of this also remain unclear).

However, the illness allows him to swim in freezing temperatures and travel through a planet plagued by deadly radiation. Unbelievable!

The other side of the story follows a crew in space, the pregnant Sully (Felicity Jones) and Adewole (David Oyelowo) are the central couple of a cast of one-dimensional character bores.

Due to lost communication, the crew are unaware of the disaster that took place on Earth. I’d hate to give any plot points away, but this would be quite difficult.

Despite occasional predicatble twists and turns the movie unravels as expected.

Moments of attempted emotion fell flat. A tale of post-apocalyptic events, and isolated experiences had the potential for poignancy and heart in the current context, but ended feeling hollow and cold.

The small, but experienced cast are mostly unconvincing – even after discovering that Felicity Jones was actually pregnant when filming I’m still unsure if I believe it.

When George Clooney starred in Alfonso Cuaron’s Gravity (2013), dull characters and weak writing were set to one side for mind bending effects. The Midnight Sky doesn’t seem to favour either, plagued by uninteresting characters, and far less fascinating effects.

In the film’s defence, some of the set is well designed, and occasional shots of the sky expose a brief glimmer into the dazzling spectacle this film had the potential to be.

However, having recently watched Pixar’s Soul, I wondered how the studio behind Toy Story was able to craft a more intricate and gorgeous painting of sci-fi.

One moment saw the space crew face a meteor strike, and yes this was the most exciting thing to happen in the entire film. CGI shots of the crew in space rendered like a remastered edition of the creepy “play-doh” characters in The Polar Express – this time in space. Reaching uncanny valley territory, seven years on from Gravity, the ropey CGI had the quality of a Call of Duty cut scene.

In Clooney’s first directorial attempt at filming a story in space it seemed he was simply trying too hard. Lacking the potential emotion and excitement that the synopsis seems to suggest, Clooney reached for the stars, but returned home empty handed, and came crashing back down to Earth with a bump.