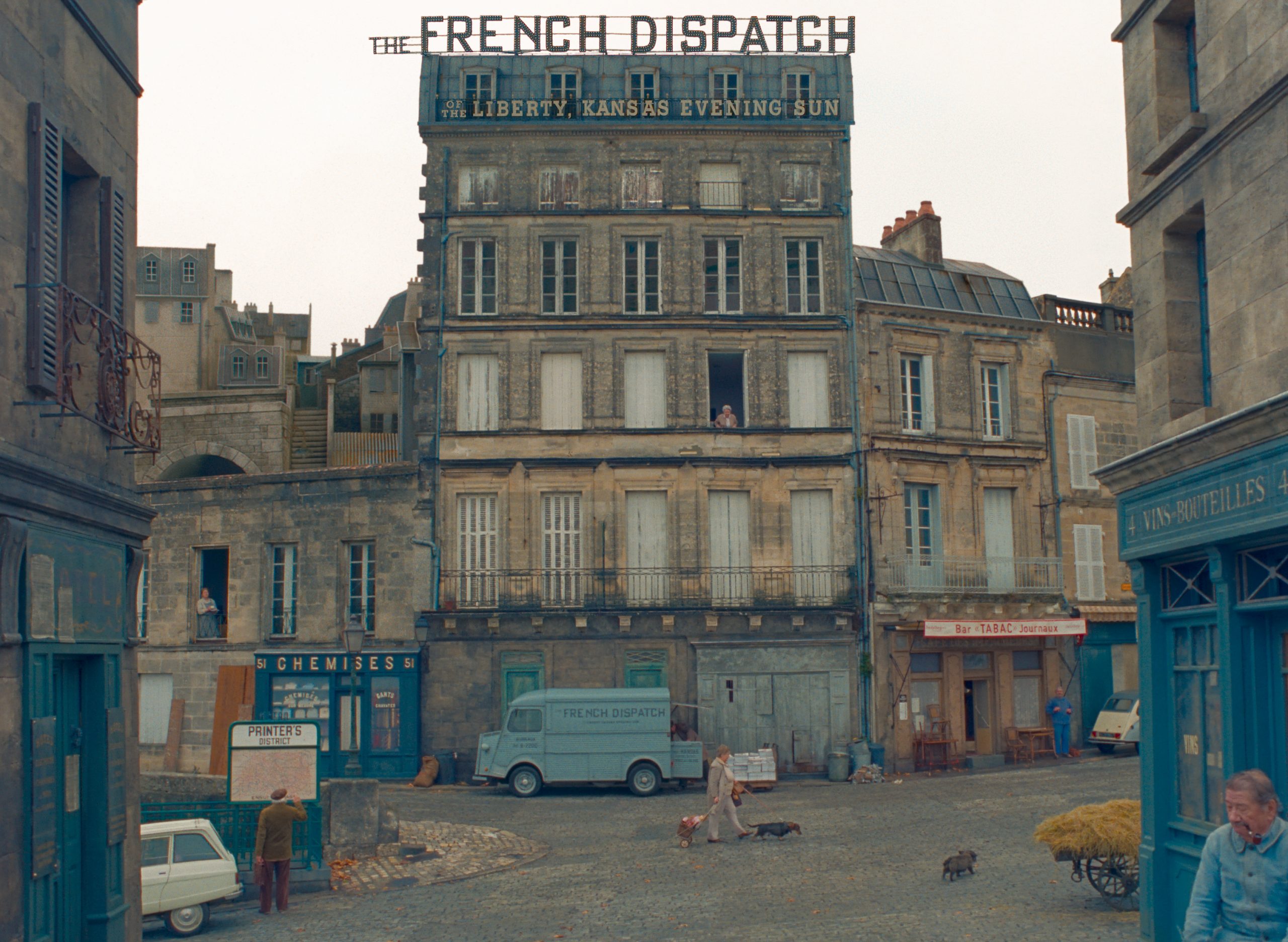 It’s 12am. I’ve just trudged home – back from the cinema, through the dark, past the night-out-ers – and should really be getting to bed. But I’m here, at my very uncomfortable desk, vaguely squinting at these little squiggly characters on my screen.

And it’s all thanks to Wes Anderson’s The French Dispatch.

The French Dispatch is a lavish, lyrical love-letter to writing. It praises writing, and writers, in all their glory. It recalls a time that probably never existed, when writers were well-liked and well-paid, necessary parts of society. I think it makes the case that they still are. It is confidently and unashamedly eloquent. Its cast of varied characters narrate the film in long lines of graceful and articulate prose, discussing art, love, loneliness, and all things in-between. It’s made up of words – lots of them – and it’s about words.

Words can make a manifesto that inspires a generation. Words can make us fall in love. Words can immortalise that cafe that you went to one Wednesday evening that you’re sure no one else has been to and that you’re desperate to share with the world. They can immortalise your grandparents. Words can connect us. Fuck that, words do connect us. When you write, you, inescapably, put a piece of yourself out there into the murky darkness, and hope that someone sees a part of themselves in that.

The French Dispatch welcomes all that with open arms.

It should be too cutesy. Too ‘smart’. Frankly, it should be completely up its own arse. The black and white interludes, stilted dialogue, and constant format changes should’ve annoyed me. Jesus, it’s got Owen Wilson wearing a Beret and carrying a film camera on an orange bicycle. It should be, scientifically, the most punchable film that a human could conceive.

But it’s just so clear that everything in the film comes out of a place of unrestrained love. Punching it would be like punching a kid who’s just obsessed with Batman. Yeah, they might be a bit annoying, but you’ve got to love them. Passion is infectious.

That unrestrained love is obvious in Anderson’s portrayal of France. It’d be incredibly easy to veer into parody – young, beautiful, effortlessly stylish people, on a veranda, smoking, lamenting the rigours of modern life and debating philosophy – but Anderson’s tale is so enamoured with the details and the characters of the France it portrays that it never generalises or reduces. Anderson’s very vocal admiration of the French New Wave goes a long way here.

It’s self-aware (the story is set in the fictional Ennui-sur-Blasé, or Boredom-upon-Jaded) but not suffocatingly so. Self-awareness can often be a crutch for the artist, a way to absolve them for laziness, because they know they’re being lazy, but The French Dispatch is anything but lazy. Owen Wilson’s opening monologue, which documents the intricacies of life in the town, is full of the attention to detail that can only come out of a place of genuine love.

The film is working on two levels. The first thing it establishes is The French Dispatch itself: a magazine supplement for a Kansas paper that tells three or four uniquely French stories. It was set up by Arthur Howitzer Jr. after a particularly successful holiday. The office itself is depicted with a lovely reverence. Characters occupy its pastel corridors like dogs sleeping in the sun – sort of calm and beautiful, even though you’re not quite sure why.

Once that’s all been done, the film then goes into three separate stories. One concerns a mentally disturbed artist who, while serving time for double homicide, begins painting abstract nudes of one of his prison officers. Another is about a young revolutionary who, after a high stakes chess game, starts sleeping with the journalist who’s writing a piece on him. The last is about a police chief who becomes an integral part of a kidnapping case.

It’s at this point that I need to mention the cast. This film stars everyone. Everyone’s in it. You’re probably in it.

Come on. Every 5 minutes or so I had another moment of “Wait, they’re in this!?”. Everyone gives stellar performances, as you’d expect. I mean I think they did. At some point I didn’t know if I was enjoying their performances or just getting a kick from seeing them on screen. Even given that, Jeffrey Wright’s effortlessly charming performance was a standout.

The strongest story in my opinion was the middle, about a group of students who begin protesting just about anything they can think of. Timothée Chalamet gives an excellent performance as the group’s leader, Zeffirelli, and Frances McDormand is heartbreaking as the deeply lonely Lucinda Krementz, the journalist on his case. What transpires examines the “touching narcissism of the young”, and the immature sacrifices that people make in pursuit of absolute freedom.

I’ve found Wes Anderson’s relentless whimsicality to be grating in the past. I couldn’t buy The Royal Tenenbaums’s genuinely disturbing moments because they were presented to me in a manner that didn’t seem to want to take itself seriously. I know some people find that this tonal whiplash becomes more affecting, as it makes the shock from the film’s heartfelt moments feel more pronounced, but I just couldn’t get on board.

Basically, Anderson’s style, for me, often submerges the story in its deliberate ‘stylishness’. You end up watching what’s happening on screen, but not seeing the meaning. Here, his aesthetic operates how an aesthetic should: as an admittedly beautiful framework in which the story is then told. It’s not unlike a newspaper or magazine – a stylish package in which real stories are told (shoutout to York Vision).

But, yes, it’s still romanticised. Timothée Chalamet’s spirited young activist doesn’t actually mention any political ideology at any point in the film’s runtime. Everyone has enough money, all the time. Love is fleeting and beautiful, and agonising, and art is spiritual and meaningful. It’s not like ‘real life’. But if, right now, after the past few years, you want to watch a film about young activists debating political ideologies, or about the realities and compromises of love, then I don’t think I want to be your friend.

And if The French Dispatch is anything, it’s like a really good friend.