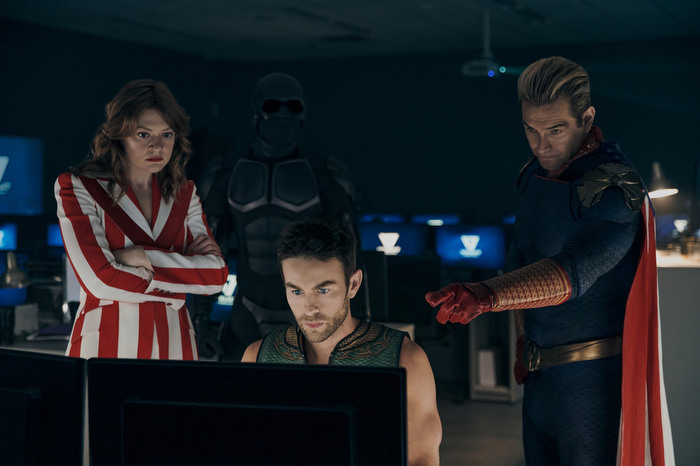 Episode 6’s Herogasm had what was quite possibly the best fight scene of The Boys so far with Hughie, Butcher and Soldier Boy all taking on Homelander; but the finale ramps things up even further for the final showdown at Vought tower.

Everything all starts to draw to its shocking conclusion of what’s been a fantastic season of television. The Boys really is not only one of the best TV shows on right now but one of the best of all time.

Every single one of the show’s characters are so well written and so well brought to life by the cast that they all feel so real. And all of these characters get a good well-rounded end to the season. Whilst Homelander, Hughie, Butcher, Soldier Boy and Starlight are much more at the forefront of the finale, characters like Noir, Deep, Kimiko, MM and Frenchie all get their fair share of the limelight.

Even Queen Maeve, someone that has had a rather disappointing amount of screen-time throughout this season, gets a good end to her season’s arc. Whilst it still doesn’t quite make up for how she’s been treated throughout the third season, it no longer feels like the writers kind of just forgot she was there and weren’t too sure what to do with her. She’s back fighting and ready to go up against Homelander.

Everyone’s ready to go up against Homelander in Episode 8. It’s been teased for a while now, but the final episode really is an epic conclusion that puts itself right at the top end of the show. Without divulging into any specifics about the show or giving any spoilers, it really is a joy to watch.

In a world with so much Marvel, The Boys provides for a really refreshing break from all that to give a superhero show that is gritty, dark and with a sense of realism to it. But not only that, there are stakes as well. Episode 8 has lots happening that will all have lasting impacts moving forward with the show. There will be consequences to what’s happened.

So much has happened to Vought, the Seven and to the Boys throughout Season 3 but it’s an absolute blast of blood, bad language and completely chaos which makes for such an invigorating watch.

Episode 8, ‘The Instant White-Hot Wild’ is a thrilling hour of telly and unlike anything else on right now. It’s incredibly well written and the cast have all been fantastic throughout the show, especially Antony Starr as Homelander and Karl Urban as Billy Butcher. Episode 8 brings Season 3 to a close in classic Boys fashion with a big bang.