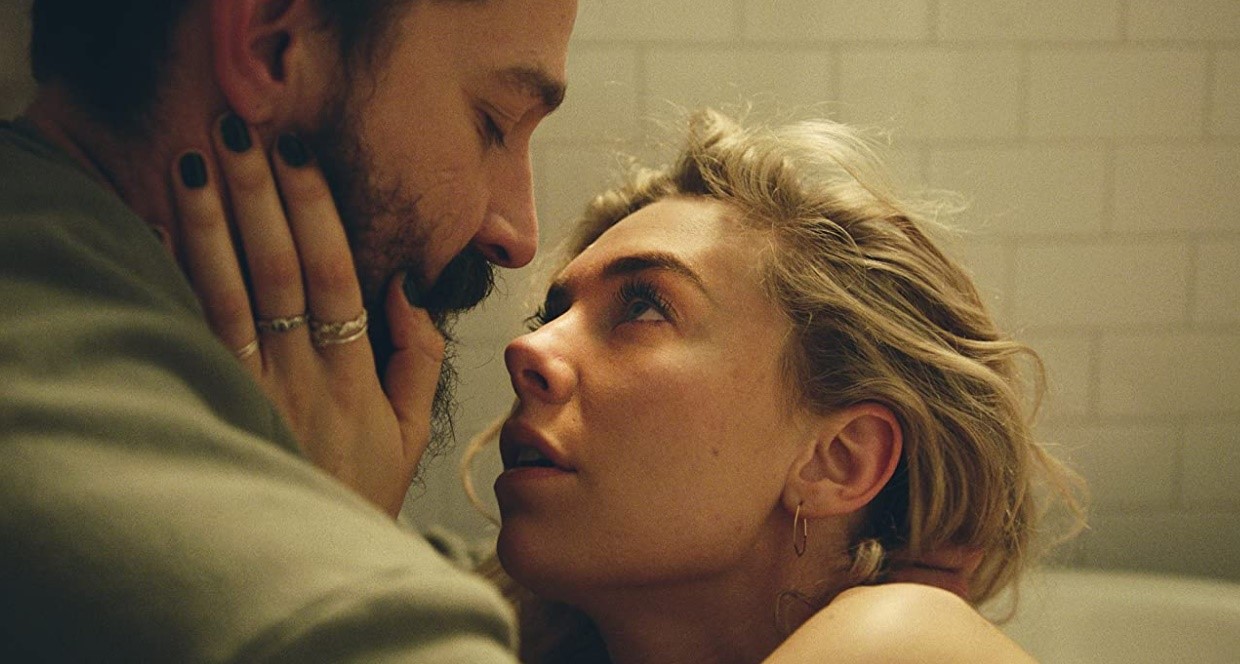 Kornél Mundruczó’s 2017 film Jupiter’s Moon tiptoed the divide of sci-fi and fantasy, however its over-ambitious intentions saw the director fly too close to the sun. In a return to form, Mundruczó recaptures his dramatic roots previously seen in White God (2014) and Delta (2008).

Recently released to Netflix, Pieces of a Woman captures the tale of a mother and father, Martha (Vanessa Kirby) and Sean (Shia LeBeouf) and the still-birth of their daughter. Both opt for a home birth, which results in an enquiry into the midwife’s culpability for the infant’s death. The lawsuit which follows acts as a background feature to the story, as Kata Wéber’s screenplay pursues the emotional fallout from such a traumatic incident. Martha walks a path of denial and defiance, while Sean descends into a world of substance abuse and sexual liaisons.

Cinematic realism can often feel so forced that it distracts from the film’s dramatic narrative – as recently shown in Ron Howard’s Hillbilly Elegy, where Glenn Close and Amy Adams took over-the-top ‘Oscar bait’ acting to new levels. In the opening 30 minutes of Pieces of a Woman, the opposite is true. Beginning with a gruelling and at times tough to watch labour scene captured intimately by Benjamin Loeb, the claustrophic and visceral opening is the film’s highlight, aided by Kirby’s powerful yet nuanced performance. What follows is a smartly structured, while slightly inconsistent study of loss and reconstruction.

Kata Wéber’s screenplay is certainly bold. Having worked with the director previously, Wéber displays the raw spirit so prevalent in Mundruczó’s White God, while also falling into the jarring traps which Jupiter’s Moon was criticised for. But the moments that shine through overpower those that fall flat, leaving a possibly ill-conceived ending irrelevant in comparison to the emotionally charged narrative which came before it.

At its height Mundruczó’s direction sits somewhere in between the authenticity of a John Cassavetes 70s drama, the likes of A Woman Under the Influence (1974) sprung to mind, and the recent emotive power of Kenneth Lonergan’s Manchester by the Sea (2016). Small details like the smell of an apple delicately capture the brewing intensity of the sadness which Kirby’s stone-faced character defiantly keeps locked away.

Shia LeBeouf similarly displays the subtleties of grief and loss, along with explosive anger of a man at war with the world. As a foil to Martha, despite an affective performance, LeBeouf’s character does little more than present the generalities of a man in self-destruction, presented time and time again in film. Removing the edge that the screenplay is certainly not far from perfecting, Sean’s story never truly mirrors the soul and intrigue of Martha’s. An opportunity to fully explore a man’s anger beyond biological instinct is neglected, and sorely missed.

It is Kirby’s performance which lifts this Netflix release to compelling standards. Duelling with her wealthy mother (Ellen Burstyn) complications of class and public image materialize. This complex dynamic provides the most potent source of dramatic intrigue. Burstyn’s magnificent performance proved once again, you can’t teach an old dog new tricks, reinstating the forceful sensibility of her 70s roles. Her performance had echoes of Alice Doesn’t Live Here Anymore (1974), directed by Martin Scorsese who as it happens was co-executive producer for this film.

In a performance worthy of the most esteemed acting awards the industry provides, Kirby is a tour de force of stirring energy and carefully choreographed restraint. Where the screenplay may occasionally lose its footing, Mundruczó ensures the production lands firmly on its feet, in one of the more dramatically adept and moving films of 2020.

One thought on “Review: Pieces of a Woman”