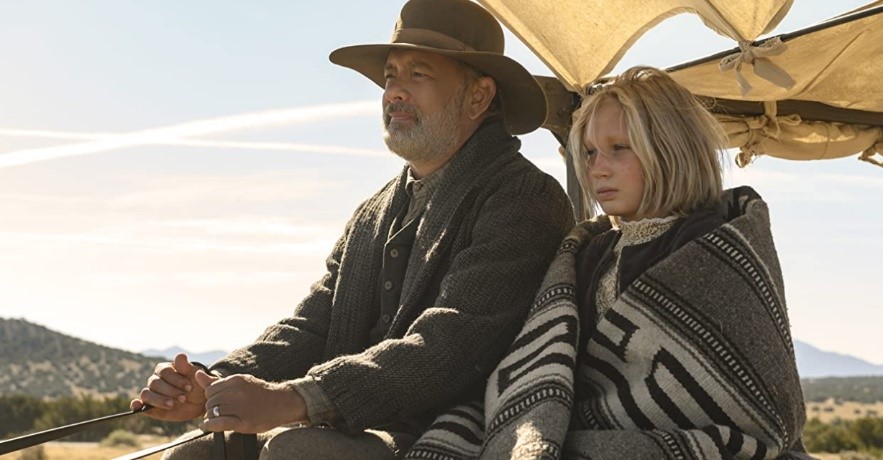 (Image: 'News of the World' still, courtesy of IMDB)

News of the World continues Tom Hanks’ comfortable run as the principled hero, this time as Captain Jefferson Kidd. Who else would we trust to guide us through adventures on the big screen? Whether that’s in space, on a boat, or on this occasion, in the Wild West.

Paul Greengrass has established a reputation for crafting films full of tension and intensity. His thrillers; 22 July (2018), Captain Phillips (2013), and United 93 (2006) were relentlessly gripping, often brutal, and anxiety fuelled depictions of real-life events. With News of the World (2021), Greengrass (who co-wrote the feature with Luke Davies) has slowed the pace, suiting the expansive nature of a Western setting, while halting the enthralling potential of a Western adventure.

In his sixth role as a captain, Tom Hanks plays Jefferson Kidd, a Civil War veteran who spends his days reading the news to crowds of eager listeners. Like News Corp. in the Wild West, he travels from town to town through the dusty Texas terrain- face coverings required. Early on, Kidd encounters a young girl who was kidnapped by Native Americans as an infant and must be returned to her remaining family. In true Hanks fashion, Kidd abides, and so begins the film.

A road-movie of sorts, the narrative follows the two as they encounter various obstacles on their journey through the deep South. As a travelling adventure there is an obvious lack of thrill, as the relatively unimaginative narrative presents road blocks which come and go in fairly uninspired fashion. While the face of Tom Hanks taking up 50% of the film’s poster isn’t something to complain about, there was a degree to which the film expected, or rather assumed, the audience’s guaranteed entertainment, in spite of the fact that, at times, it doesn’t necessarily earn it.

Still, the stellar central performances from America’s adoptive father and the remarkably believable Helena Zengel anchor a film which would certainly be lacking without them. At just 12, Zengel stands out as a certain star, holding her own against the ever-watchable Hanks. The beating heart of the film is the chemistry and charm of the central duo. However, this beat sometimes felt like a slow drum and, at its worst, a sedate tap.

Yet, there were moments where the film slowed me to its rhythm, as the gentle pace of the film sometimes suited the soft-hearted nature of the tale. James Newton Howard’s emotive score powerfully complimented the stunning Western visuals photographed by Dariusz Wolski. Moments of ropey CGI were irrelevant in comparison to the film’s undeniable beauty which is begging for a big screen release. The occasional references to classic Western’s, notably John Ford’s The Searchers (1956), reaffirmed the film’s Western roots, which sat nicely alongside the 21st century sensibility of the tale.

It was the events within the story that felt lacking, as the screenplay managed to simultaneously engage and disengage me with its safe and conventional plot points. Far from a failure, but probably short of a success, News of the World lacks the dramatic tension required when capturing a slow horse ride through the deep South. Still, Hanks and Zengel provide wonderful central performances, making them the perfect company for a story of this sort.

Central to the film’s strengths is the enjoyment of two talents at very different points of their careers. Hanks gives the audience a modest tip of his cowboy hat as he excels in the Western setting, whilst Zengal is a figure of undeniable talent, preaching a promising future, to infinity and beyond.