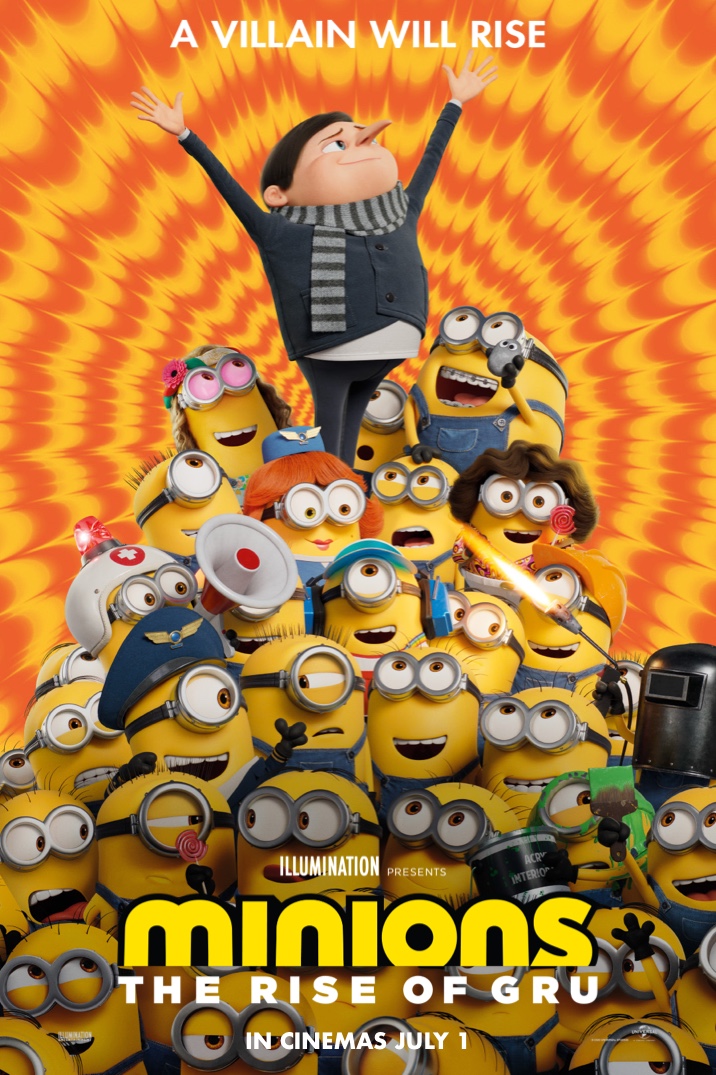 Minions: The Rise of Gru gives viewers exactly what they expect when settling down for another venture into the MCU (Minions Cinematic Universe); laughter, villainy and a truck load of yellow banana-loving henchmen.

A cacophony of chaotic fight scenes, entertaining villainous hijinks, and child friendly potty humor builds off four movies worth of beloved jokes and characters, to continue this franchise in a fun, if increasingly repetitive pattern. The vibrant 70s atmosphere and the sneak peek into Gru’s childhood is intriguing enough to give adult viewers something to enjoy, whilst children will certainly adore the proven fart jokes and yellow minion butts that have always induced squeals of laughter.

After ending the first minions film with the villain-obsessed henchmen finally meeting their adored boss, the sequel follows the 11 (and ¾) year old Gru as he tries to make a name for himself as a villain prodigy.

He interviews with the top villain supergroup of the 70s, the Vicious Six – whose hilariously punny names may be the highlight of the film (for adult viewers at least) – but is turned down because what villain supergroup would hire a kid? The safeguarding paperwork alone would be a nightmare!

So, in an effort to prove himself, young Gru steals a sacred amulet from the group – which new minion Otto promptly trades away for a rock with googly eyes. Gru is kidnapped by his hero, the recently unemployed Wild Knuckles, and thus begins the minions’ frantic quest to retrieve both amulet and mini-boss before it’s too late!

The story bounces quickly between these many subplots, from jedi-like villain training between Wild Knuckles and Gru, to Otto’s cross country tricycle race, and Kevin, Stuart and Bob’s efforts to learn martial arts from Michelle Yeoh’s Master Chow – all building into a big, beastly battle between supervillain and minion in San Francisco.

Amongst these rushed rescue attempts, the most entertaining, minion-esque moment comes when the three lead minions attempt to fly a plane to San Francisco; entailing a costume change, a relatable fight with the vacuum toilet, and an in-flight nap from pilot Kevin! This world works best when it focuses on the simple antics of these fascinating yellow creatures battling through relatable real world problems, and this specific sequence certainly had both adults and kids in fits of giggles.

The third act descends quickly into a cacophony of chaotic fight scenes and potty humor, with the confusing macguffin powers of this amulet turning everyone into animals as a captured Gru is almost torn apart on a clock tower.

This life threatening danger and the courageous rescue efforts of the minions is a nice reminder that while Gru is a masterful and engaging villain, he is also just a child in this movie, played quite impressively by the almost 60 year old Steve Carrell. The pairing of these unworldly minions and a young naieve gru makes for a series of fun hijinks (including fart bombing a screening of Jaws) and learning experiences, as we glimpse into how the evil empire of Despicable Me came to be.

Ultimately, this film exists to remind kids and adults of the joy that comes from the simple jokes and the random babblings of minions. It doesn’t change the game, and verges on too predictable and repetitive, but is entertaining enough to warrant a family trip to the cinema this summer. And if grown ups are willing to sit amongst squealing, giggling, overexcited children for 90 minutes, they too can reminisce in the nostalgia of this long running franchise and feel that same childlike wonder that they partook in when these banana loving henchmen first graced the screen over a decade ago.

For a predictable but jam-packed minion adventure, head out to see Minions: The Rise of Gru this summer, and don’t forget your yellow shirt and overalls (or for all the Tik Tok #Gentleminions out there, a suit and tie!)