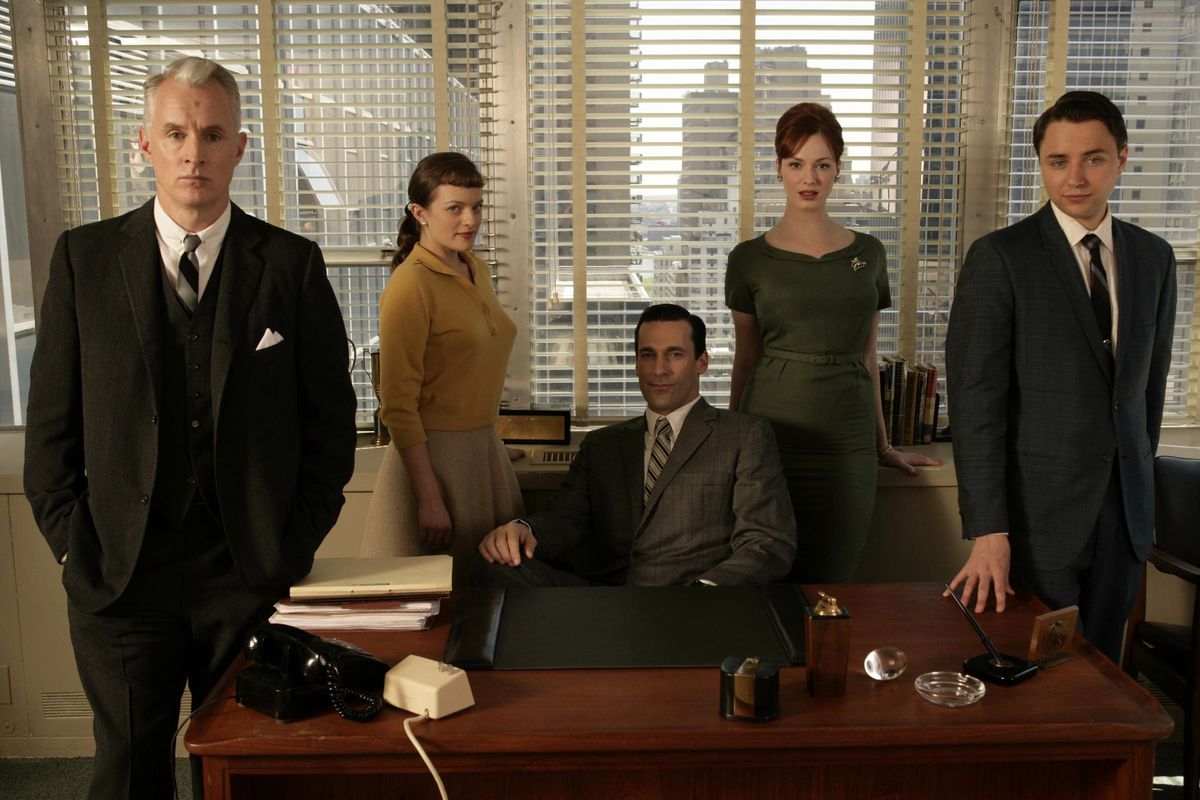 “Mr Draper, I don’t know what it is you really believe in, but I do know what it feels like to be out of place, to be disconnected, to see the whole world laid out in front of you the way other people live it.”- Rachel Menken

Mad Men is about selling the American dream whilst realising it doesn’t exist (or so fans claim). The show opens the door to the world of 1960; right at the heart of Madison Avenue is the advertising company ‘Sterling Cooper’, where our protagonist – Don Draper (Jon Hamm) – is Creative Director. Through the eyes of Draper and the supporting characters, we see the major historical events and turning points of the 1960s.

The show follows Draper, whose life is a ‘Great Gatsby-esque’ tragedy. He is born ‘Dick Whitman’, an illegitimate child, amid the Great Depression; his father being a poor farmhand, and his mother an Illinois prostitute who dies during his birth. Shortly thereafter, his father dies too, and he is taken in by his abusive stepmother who runs a brothel. This drives him to escape his life, using the Korean war to commit identity theft and become Donald Draper.

Most of the episodes switch between focussing on the creative team drawing up adverts at work and the struggles of their home lives. This helps highlight a contrast between how in their real lives they are plagued with problems – alcoholism and drug abuse, infidelity and affairs, discrimination, and financial ruin; yet these are not visible in the happy suburban family they paint on posters in the office.

Nonetheless, Draper tries to make those posters his reality; (You know the sort, a perfect 1950s family consisting of a couple with two children smiling alongside their obedient labrador on the front lawn). Despite not wanting any of that, he knows that’s what men of his status are supposed to want. He feels more comfortable spending his time with other broken people who share similar traumatic backgrounds (typically, in the form of finding another mistress from a different ghetto of New York each season).

The show also acts as a character study; we don’t encounter even one wholly likeable character in its entirety. Sure, Draper is a self-made man and creative genius, but he also regularly cheats on his wife, abuses his staff, and disowns his younger brother. Then there’s Peggy (Draper’s secretary), who is helping break the glass ceiling by being the first woman in the workplace but is also a self-centred egotist. Roger (Draper’s boss) is charming and humorous almost all of the time but then ruins it by being a vile xenophobe and liar. Oppositely, Pete Campbell (Draper’s colleague), is a spoilt, entitled brat most of the time, but ‘semi’- redeemed himself by being the only person in senior management to stand up against racism. Perhaps Lane Pryce, (a partner of the firm) is the most clean-cut (although maybe I’m positively biased towards the one British character), and even his character visits brothels whilst being married, so again is not exactly a role model. No grand redemption arc takes place which leaves behind wholesome characters. You simply learn to overlook their negative traits and say “Well, they’re dislikeable in every regard, but they stood up to this or that or did that good thing one time, so at least they’ve got that going for them…I guess”.

The final season did not end particularly well, the last episode itself was not exceptional, and even the last three minutes seemed headed for disaster…BUT, the last 30 seconds abled to redeem it. We see Draper meditating at a hippie retreat, seeing the camera fade away from him, with the audience hoping there won’t be a cringy ending of the protagonist finding inner peace. And thank heavens there was not!  The smile that appears on his face is not from having found the meaning of life, but a smirk from having figured out how to turn the hippie craze into an advert he can get paid for, thinking just like a true marketing executive. The camera zooms out from him onto the most iconic advert of the last century – Coca-Cola’s “I’d like to buy the world a coke”.

Let it be known, however, that the show is not for everyone. I’d say a good seven in ten people will not enjoy it in all honesty. This is because the show is an extremely slow burn, feeling far more like a novel than a film or TV show. On the other hand, this gives the show a rich feel and makes it feel more gripping.

It is difficult to pinpoint what makes the show compelling, but if I had to take a stab in the dark, it would be the theme of putting on a front. Whether that’s Draper pretending he’s an old-money WASP or the irony that a creative team who boost sales through claiming products bring happiness find their own selves discontented as upper-middle-class people who possess them.