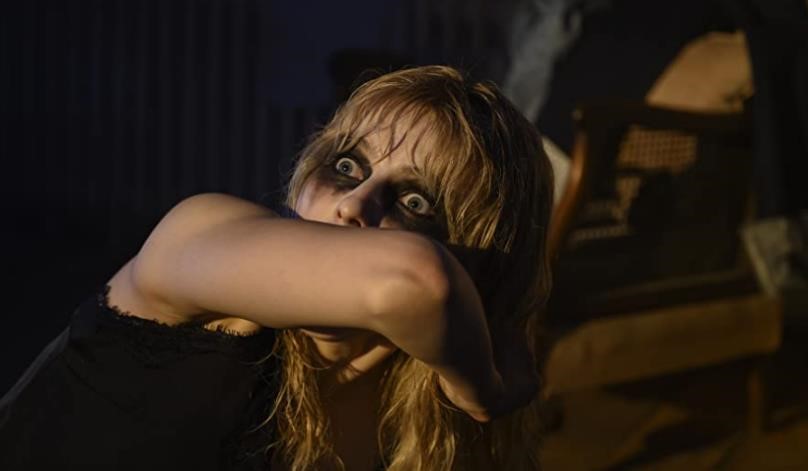 ‘Last Night (in Soho) I dreamt that somebody…tried to kill me.’

Edgar Wright’s latest film takes a confident catwalk into the dazzling otherworld of 60s Soho, wearing its giallo influences with pride, this stab at all-out horror confidently combines the aesthetic of two distinctly different decades. While the stunning set and sound design craft a unique cinematic experience, the final spin and dazzle is much more ‘mmm…nah’ than ‘ooh…ahh’.

Written by Wright alongside Krysty Wilson-Cairns, Last Night in Soho opens with a modern day, aspiring fashion designer, Eloise (Thomasin McKenzie) who is venturing from Cornwall to London to begin her new chapter as a student at the London College of Fashion. Haunted by her mother’s suicide and stunted by a history of unspecified mental health issues – Eloise is a naïve, wide-eyed ball of innocence, desperate to prove herself and carve her future while the past holds a tight grip on the path she attempts to create.

Soon after arriving in London, Eloise realises that her visions of a swinging Soho – influenced by her love of the 60s – are not at all what she dreamed of. Cruel classmates and rowdy local haunts force Eloise to dream of another world and drift into a past which soon begins to merge into modern day.

At night, Eloise enters an other-worldly fantasy of 60s London, and the stunning set-design drags the audience with her. The refuge of 60s Soho becomes even brighter when Eloise steps into the shoes of Sandie (Anya-Taylor-Joy) who offers a confident alter-ego for our protagonist. But, in true horror fashion, daydreams drift into nightmares as the glitz and glamour of the 60s soon descends into a traumatic world of seedy bars and sexual exploitation, as Wright and Wilson-Cairns present a stunning picture of the past through blood-tinted glasses.

Thomasin McKenzie lures in the audience with her complex quietness and Taylor-Joy brings the assured confidence of an actor well-established in her career. The presence of Terrence Stamp and Diana Rigg as (non-literal) ghosts of Soho past also add to the nostalgia that the film boasts so proudly. Since shooting finished, Rigg has sadly passed away, but this is a fitting farewell for a figure whose first taste of success came appropriately from her role in On Her Majesty’s Secret Service in the 60s.

Having grown up in Somerset and later lived in Soho for 25 years – the picture is teaming with the director’s personality, but Wright took the sensible decision to seek the help of a female co-writer to guide the more complex feminist perspective of the tale.

Opening with a stab at merging the female-driven narrative of Georgy Girl (1966) with Wright’s own experience of moving to Soho – there is an exciting appeal to the earnest nature of the opening 30 minutes. Most people who have followed Wright’s career are big fans of his quick wit and sharp style, and embrace a film that feels so personal. It’s full of character and life. But there is a sense that half the work was done before shooting had started – Wright’s passion for film is charming and it carries the heart of a story filled with references that warrant a second viewing, regardless of its failings.

Similar characterful control can be found in the infectious energy and intelligence of the movie’s musical choices. Wright’s passion for sound was on full display earlier this year in his documentary The Sparks Brothers (2021) and Last Night In Soho charms with a similar musical drive, this time capturing the soulful sound of the 60s. The (now-expected) brilliance of the soundtrack is another Wright trademark – and at times his film gleefully wizzes along with the confidence of the glorious, chorus driven ballads that permeate the picture.

Wright’s direction oozes with confidence as smart editing switches personas with ease, while intelligently crafted set-design and transformative soundscapes ease the audience into a mesmerising impression of the past. Neon lights and Suspiria-style frights create an intriguing treat of visual splendour – that is certainly more psychological than horror-full.

Although the influence of Mario Bava and Dario Argento is evident, the tortured mind of Eloise reminded me more of Roman Polanski’s Repulsion (1965). As Wright and Wilson-Cairns attempt to put the psyche in scary, the audience is invited into an operatic world of a dream-like Soho, dipped in a bay of Mario Bava’s blood. And, references aside, at it’s unnerving peak the film’s tone sits more obviously along that of Michael Powell’s Peeping Tom (1960) and Darren Aronofsky’s Black Swan (2010).

Spaced from the sharp wit of Shaun of the Dead (2004) and Hot Fuzz (2007) – Wright is pushing himself creatively, but Last Night in Soho is a double-edge sword (or knife) as the writing duo can’t quite stick the landing, in an ending that feels like a stab in the back (and the dark) that lets down the world-building and character development that came before it.

Towards the end, the fractured screenplay began to crack and splinter, and ultimately fall apart before the audience’s eyes. The final third descended into a frustrating and frankly ridiculous mess – which felt highly out of place when considering the place exploration and sexual violence that came before it.

Perhaps a reflection of the dramatic rise and fall of the swinging 60s – the final denouement felt like we’d skipped past the ending and entered the straight to video sequel. All thematic and tonal complexities were thrown out the window for over-the-top and silly spectacle, which sat uncomfortably alongside the rest of the film, in such drastic difference to the intrigue of the opening hour.

You won’t be wasting your money with Wright’s latest, daring treat – but when the core of the appeal stems from the creative visual display and snappy soundtrack, you may be better off viewing his latest documentary The Sparks Brothers which, incidentally, received a DVD release only last October.