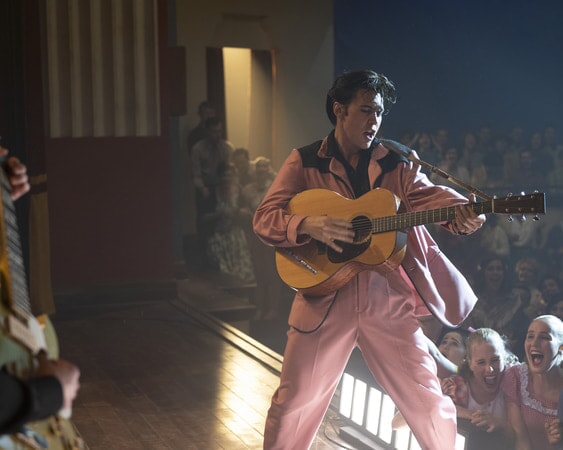 Austin Butler does an incredible job at portraying the king of rock and roll, mastering Elvis’ signature dance moves and voice.

Directed by Baz Luhrmann, who was nominated for an Oscar in 2002 for Moulin Rouge!, Austin Butler has already been nominated for Best Actor at the HCA Midseason Awards, alongside Luhrmann for Best Director, and an overall nomination for Best Picture.

The biopic documents Elvis’ struggles with stardom, drug dependency, losing his mother, and the strain on his relationships. There have clearly been conscious decisions to omit details of Elvis’ career, choosing instead to focus on his music. However, the film depicted a well rounded and accurate representation of Elvis’ life, from his highs to his lows.

I particularly enjoyed the exploration of Elvis’s relationship with his manager, the infamous Colonel Tom Parker. With Tom Hanks starring as the manager, Hanks works his usual charm to make the Colonel dislikeable whilst also provoking feelings of pity and sympathy for his character.

We see a younger Elvis, portrayed by Chaydon Jay, grow up in Memphis and how his experiences are shaped by the music of gospel and the black community. Little Richard, portrayed by Alton Mason, is given recognition as shaping Elvis’ music and the king he went on to become.

The track list, which includes music by Doja Cat and Eminem, as well as Elvis’ own vocals, perfectly matches the mood of the point of the narrative, drawing the viewer into the moment. Even for those who aren’t Elvis fans, there is an undeniable energy created by the sound that draws you in.

Catherine Martin, winner of four Oscars for costume design for Moulin Rouge! and The Great Gatsby, did an incredible job with Elvis’ outfits. From the iconic pink suit to rhinestone jumpsuits, Martin takes inspiration from classic pieces and adapts them to suit the moment.

Whilst I enjoyed the angle that the screenwriters chose, I would have loved to see more time spent exploring Elvis’ relationships. There is a clear effort not to dwell on the negatives, however, I think that there could have been more air time given to Elvis’ mother and the influence of her passing on his relationship with other women. I would also have loved to see the infamous Fool’s Gold Loaf!

At two hours and 39 minutes, this is a long film by all accounts. However, unlike many films I have seen in the cinema, it didn’t feel as if it dragged. The story arch was so clear, and I didn’t find myself wishing for it to be any shorter.