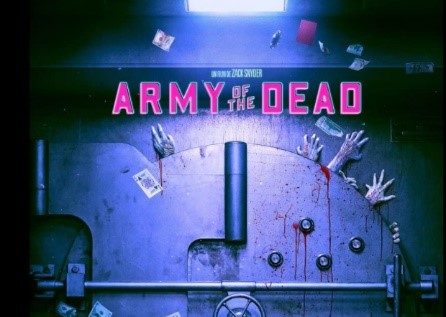 (Image: 'Army of the Dead' poster, photo courtesy of IMDB)

Zack Snyder’s reputation is an ever-changing cycle of excitement and disappointment. And, despite his controversial position in the comic book world, there is no denying his success when it comes to zombies. Granted, that ‘success’ stems from just one film, Dawn of the Dead (2004), his remake of Romero’s classic. But, it’s an excellent movie. Fun, coherent and exhilarating – but not ground-breaking by any stretch of the imagination. And, despite missing a lot of what made his first attempt so great, Army of the Dead still seems to be ticking similar boxes.

Based on the success of his earlier effort, there was a great deal of interest in his latest braindead exercise. Of course, by braindead I was referring to the zombies, not the film – Snyder’s picture is nowhere near the Shaun’s or Nights of this world, but it’s not that bad.

Put briefly, Army of the Dead is the story of a gang of mercenaries attempting to steal millions of dollars from a casino in Las Vegas. The only catch (apart from the fact that they are breaking into a booby-trapped vault) is the contained zombie outbreak at the gambling capital of the world, which has now been quarantined and surrounded by shipping containers. And, as if that wasn’t enough, there are military plans to nuke Las Vegas, leaving the group limited time to complete their mission.

The gang that are gambling their lives against the clock is packed full of unoriginal characters. In fact, I’m sure I’ve seen each of these personas in other films before. The central narrative focuses on former mercenary, but now down-on-his-luck burger chef, Scott Ward (Dave Bautista), attempting to fix his difficult relationship with his daughter, played by Ella Purnell.

Other uninteresting characters come and go, with one slightly more exciting addition being Matthias Schweighöfer as Ludwig Dieter – the safe cracking German with a quirky style. Not a game changing character, but he’s set to star and direct in a prequel based around his character, so what do I know.

As is often the case with Snyder’s films – the entire thing is stamped with his vision. You might as well have a ‘Snyder was here’ watermark printed against the screen, from the saturation to the… well… other Snyder stuff. Obviously, attempting to make sense of the braindead plot – I actually meant it that time – would be almost impossible. Not that it’s complicated, it’s just that the character motives and decisions don’t really make much sense. At times disorientating in its attempt to cover so many characters and dynamics, the film is forced to move at 100mph, with even the slightest of dramatic scenes edited at a whiplash-inducing pace.

While a lot of the dramatic aspects of the narrative wear thin almost immediately, the rest of the film is filled with mostly blood, guts, and gore – and this, this is a lot of fun. The Aliens style approach of a rag-tag team of fighters mostly works – and, when seeking zombie fun directed by Zack Snyder, I didn’t tune in for the dialogue.

Obviously I tuned in for the zombies. And that’s what Army of the Dead does well. Although sometimes ropey, the CGI is decent, and the practical effects even better. There’s a zombie tiger, so there’s little reason to complain.

In an opening in keeping with Snyder’s textbook all-or-nothing approach, it is clear from the start that there is less grit and more glamour in the at times campy and all the time extravagant zombie-fest. The soundtrack, packed full of covers and stereotypically ‘Vegasy’ numbers, embraces the style which borders on pastiche but stays well within its right to get serious when the gore kicks in. Embracing its Vegas roots, the film feels like a play on the zombie films that have come before it. And, although it lacks the intellectual bite to truly do this – what’s left is a film that fluctuates between borderline parody, over-the-top pop and several moments of genuinely grotesque undead action, which succeeded in raising a smile, a fist-bump, and an occasional wince.

Referred to as a spiritual sequel to Dawn of the Dead, in some ways it feels like what Aliens was to Alien. Lacking the intelligent chills of the first, but capitalising on the extravagant potential of its concept. But, I’d like to make very clear, so as not to mislead anyone, Snyder’s film is nowhere near as good as either Alien or Aliens. But you already knew that.

Of course, Snyder’s latest meat feast isn’t everyone’s perfect slice. But if silly zombie action is something you’re partial to then this one ticks a lot of boxes. Just remember to leave your brain at the door before settling into a film which makes Godzilla v Kong feel like a carefully crafted, Sorkin-style screenplay. Lacking the intelligent scares of The Girl with All the Gifts (2016) or the sublime satirical bite of The Night of the Living Dead (1968) – Snyder’s film mostly makes up for this with raw entertainment. Just don’t go in expecting much more than that.