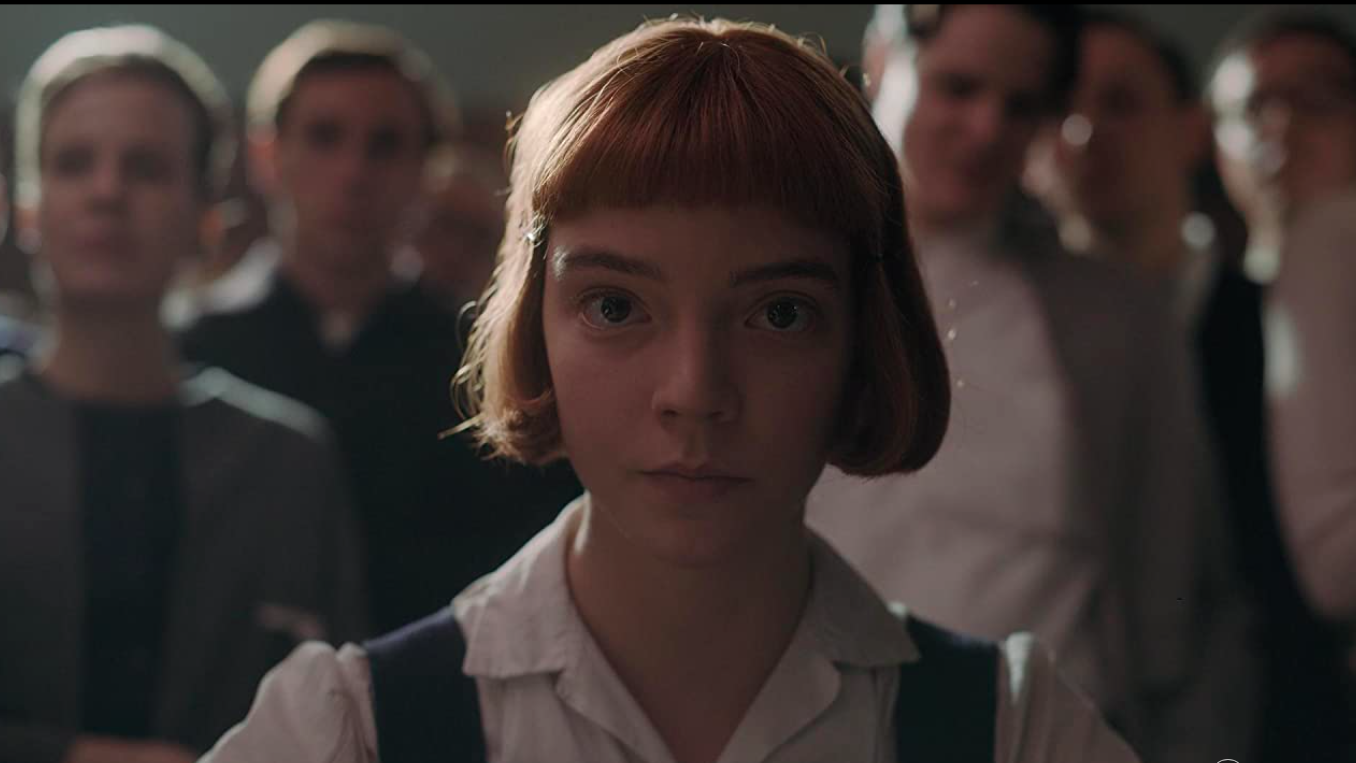 Netflix’s “don’t-miss-this-autumn” release : The Queen’s Gambit, a miniseries (7×50) produced by Scott Frank and Allan Scott, is definitely worth your time!

Set in Kentucky across the 50s and 60s, it is the moving coming-of-age story of Beth Harmon (Anya Taylor-Joy) in the masculine world of chess competitions. Beth discovers chess at the age of nine, in the basement of the orphanage she lives in. She very quickly becomes obsessed with the game, and this obsession collides with an addiction to tranquilliser pills, provided by the orphanage everyday. Beth eventually gets adopted. This is her ticket out of the orphanage and into the world of chess.

“Creativity and psychosis often come hand in hand, or, for that matter, genius and madness,” says a journalist to her.

This is just it: the series is about Beth trying to untangle her genius from her psychosis and addictions. In all episodes, you see her in perpetual conflict between apparent self-confidence stimulated by the thrill of the games, and terrifying worthlessness fed by her loneliness and addictions. It can be painful watching her self-destruction, and push away everybody who wants to help her. It is hard seeing her feed one addiction with another. Beth is playing a game against herself. Will she defeat herself? Or will she discover that there is a world outside the chess board?

One of the highlights of the show is the way it deals with sexism within the field of chess competitions in the 60s. Girls at Beth’s high school, journalists, the boys themselves: everybody constantly reminds Beth that she is the only girl in this world filled with brilliant masculine minds. However, Beth has a modern and strong opinion about the topic. From the beginning, it seems natural to her that gender has nothing to do with chess. She doesn’t understand the stereotype, and is tired of commentators saying “she plays well for a girl”.

Another highlight of The Queen’s Gambit is its general aesthetics. Overall, the series adopted a monochromatic atmosphere filled with the greys and blues of Beth’s orphanage uniform and walls of her house. These cold colours contrast with the intensity of Beth’s great big eyes, filled with adrenaline as she moves the pieces along the board. This atmosphere does lighten as the series progresses. Success, money, and liberty bring colours on the screen through Beth’s choice of clothes and house deco.

A monochromatic atmosphere with splashes of bright colours here and there: that’s exactly what the soundtrack sounds like. The orchestral original composition crafted by Carlos Rafael Riviera is dominated by strings, and comes in sharp contrast with the brightness and joy of all the great songs of the 60s that occasionally appear. Some of the greats make an appearance: The Monkees, The Vogues, Peggy Lee, Shocking Blue…

Another of the series’ successes is its treatment of time. The series journeys through the 50s and the 60s, two decades that evolved fast, but were marvellously reconstructed through spectacular set design and concise costume creation. The hotel rooms, lobbies, and gorgeous outfits provide a true evolution of Beth’s story. Daniel Parker, the hair and makeup designer, has done an amazing job at representing Beth growing up, her style changing as the years go by.

The Queen’s Gambit is a high quality series. It is not only moving to follow Beth in her attempts to grow up and discover who she wants to become, but also very interesting to discover the world of chess competitions. You will be caught in the story. No need to understand chess to enjoy the matches: you see it all in her eyes.