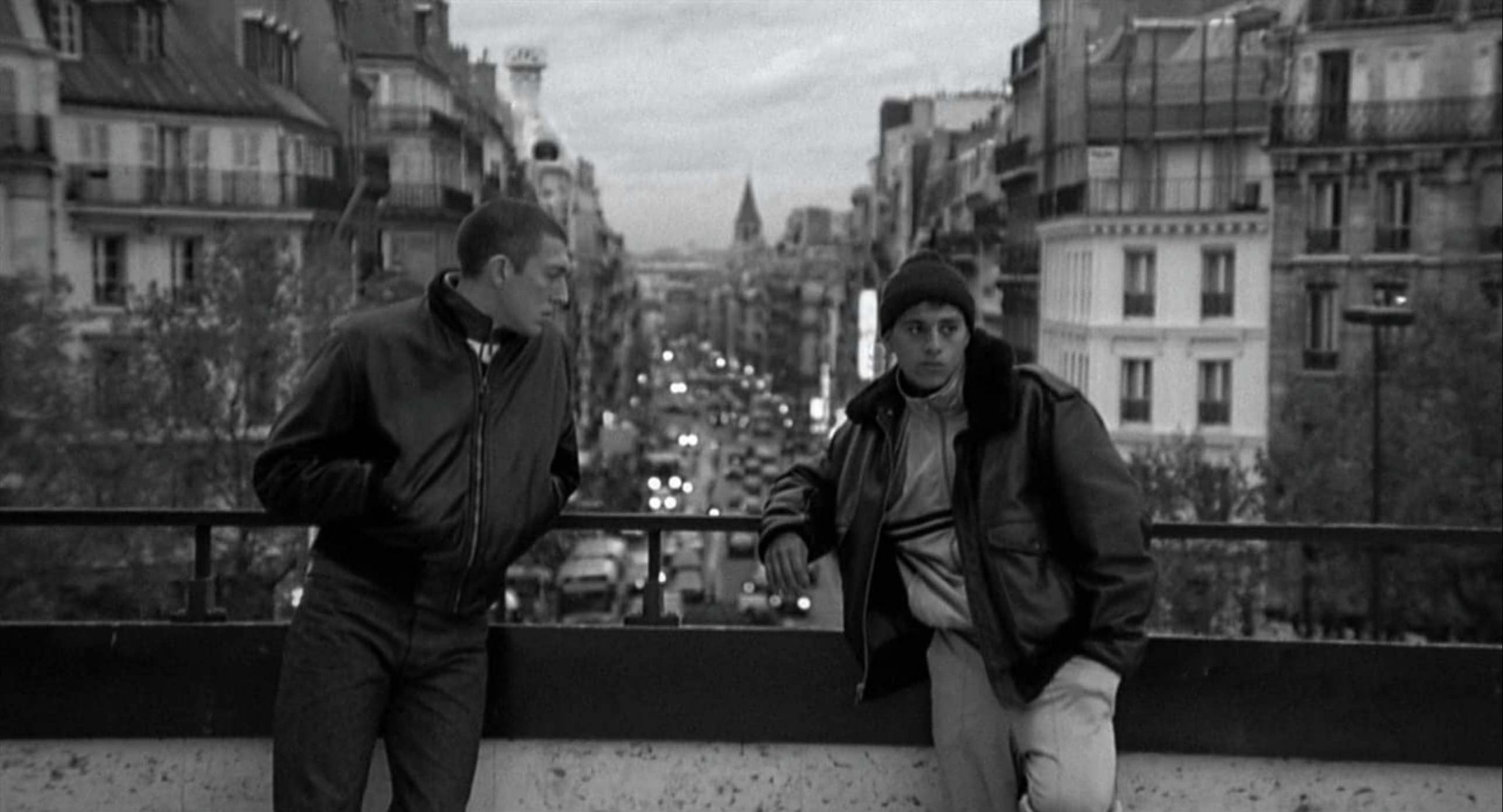 La Haine was recently re-released to cinemas for its 25th anniversary.

The release of the 1995 black and white picture, co-edited and directed by Mathieu Kassovitz, coincided with the release of Les Misérables – a directorial debut based on Ladj Ly’s short film of the same name. When viewing these films recently, the similarity of themes of social divide, and systemic issues made clear that these problems are still persistent.

Both films were capable of capturing the cycle of social problems within
these French suburbs. They compliment each other as a fascinating double bill – a great way to spend a self-isolated afternoon.

La Haine follows 3 friends surviving in the Parisian Banlieues – considered to be a poverty trap by most in France. This area is a site of social exclusion, often noted for its disproportionate immigrant population. Vinz, Hubert and SaÏd are the trio of protagonists.

Vinz, powerfully played by Vincent Cassel, is a figure representing the culture of hostility felt in these suburbs. Hubert (Hubert Kounde), an Afro-French boxer refuses to enact violence against police, and SaÏd (SaÏd Taghmaoui) is a young North American Muslim who tends to mediate between the two.

La Haine gives us 24 hours with the trio, following the attack and hospilisation of Abdel Ichacha, which led to rioting in the streets.

These 24 hours show the tensions of a community in neglect – not distant from the bubbling anger displayed in Spike Lee’s Do the Right Thing. The harsh, black and white tones of La Haine accentuate the feelings of unease and tension, whilst also evoking the beauty of early monochrome French cinema.

The film is separated by inserts of the time on screen providing a constant flowing rhythm. We are “falling” with the characters, waiting for the eventual, devastating landing.

Les Misérables is set in the commune of Montfermeil, based on real life events of the aftermath of the 2018 World Cup. The beginning showcases a brief time of unity and connection amongst people of different social groups or ethnicities. This is short lived.

In contrast to La Haine, the central figures of the film are 3 policemen. Ruiz (Damien Bonnard), the newcomer, Chris (Alexis Manenti) who regularly abuses his power and Gwada, immaculately portrayed by Djebril Zonga.

Alexis Manenti’s character seems to mirror the behaviour of Vinz in La Haine. Both are acting in aggressive and hostile ways as a means to increase power or enhance positions. Vinz mimics Travis Bickle, and Chris is told he behaves like a cowboy. Here, both films are dissecting the fragility of human behaviour, and the use of violence purely to obtain dominance or power. As La Haine states, “hate breeds hate”, both the police and citizens are stuck in a cycle of violence and anger.

The question is, will this ever end?

Julien Poupard’s excellent camerawork for Les Misérables is of particular note in various scenes. While the polished style that this film adopts works perfectly fine, La Haine’s black and white, almost documentary feel is far better suited to films of this nature. Still, both are able to present their core ideas effectively. Essentially, both films are screaming at their audiences- “there is a problem here, and it needs fixing.”

Neither film reaches a peaceful conclusion or resolution – they are open ended. Again, the audience is being reminded that all of these problems are still happening.

As though Les Misérables simply picked up where La Haine left off, we have a modern retelling of an old problem. We are shown that “hate breeds hate”, and that without major change, we will always end in the same position – the same hard landing.

Rioting and violence was an issue of real prevalence upon the release of La Haine. The release of Les Misérables is no different. The banlieues have a persistent association with urban violence, such as outbreaks in Lyon in 1981.

According to Fabien Jobard’s Overview of French Riots the “ete chaud” (‘hot summer’) saw 250 cars destroyed. In Toulouse, April 2018, 10 cars were set on fire. As discussed in “The Local”, the cause of outbursts is blamed on a multitude of things, some claiming it was arrest of a Muslim woman wearing the full veil, others say it was the death of an inmate.

The reason for so much anger isn’t ever entirely focused upon – it is a coverage of seemingly immovable tensions within society. This is what makes the release of Les Misérables so intriguing and concerning: the film is saying this type of violence won’t change.

In La Haine we are invited to explore a community on the fringes of wealth. The documentary feel and rough stylistic approach makes every moment personal, as though we are another member of the gang. One remarkable shot, captured by Pierre Aim, shows the trio on the top of a building looking onto the Eiffel Tower – it shines and dazzles in the sky, encapsulating the glamour and wealth that the trio are so distant from. Money, and the idea of a ‘high society’ are so close, yet so far.

Ladj Ly used animal imagery to evoke not dissimilar ideas. Circus animals were used, emitting ideas of being unnaturally trapped, a mirror to the depravities of this society. In one scene a young boy (Issa) is forced into a cage by a circus owner- face to face with a lion. Although the message is a little on the nose, it is clearly painting the difficulties faced by being raised in French suburbs, the lion could be seen as many things. The police, the system, or just life.

In both La Haine and Les Misérables there seems to be an aspect of connection in their struggles between the communities. The trio of friends in La Haine are frustrated and bitter but they hold onto life through their friendship. As the phrase repeats throughout La Haine; “It’s about a society in free fall”, then; “jusqu’ici tout va bien” (“so far so good”). Everything is okay until something big happens, and then a cycle seems to restart. However, as “jusqu’ici tout va bien” states, the trio of La Haine seem to cope and thrive in their struggles.

At their core, both films are holding the same values, calling out the flaws of human nature, and hatred that festers in these suburbs, eventually bubbling into outbursts of violence. Les Misérables‘ final movement is chaotic and pain inducing. By the closing shot, the joys of celebration are so distant that even the viewer has forgotten them. The film begs the question; how did we get here?

As Les Misérables ends, the screen reads a quote from Victor Hugo’s historical novel; “Remember this, my friends: there are no such things as bad plants or bad men. There are only bad cultivators”. Another 25 years from now there may be another film, with an identical message. Perhaps with a title from another Victor Hugo novel; L’Année Terrible seems very appropriate right now.