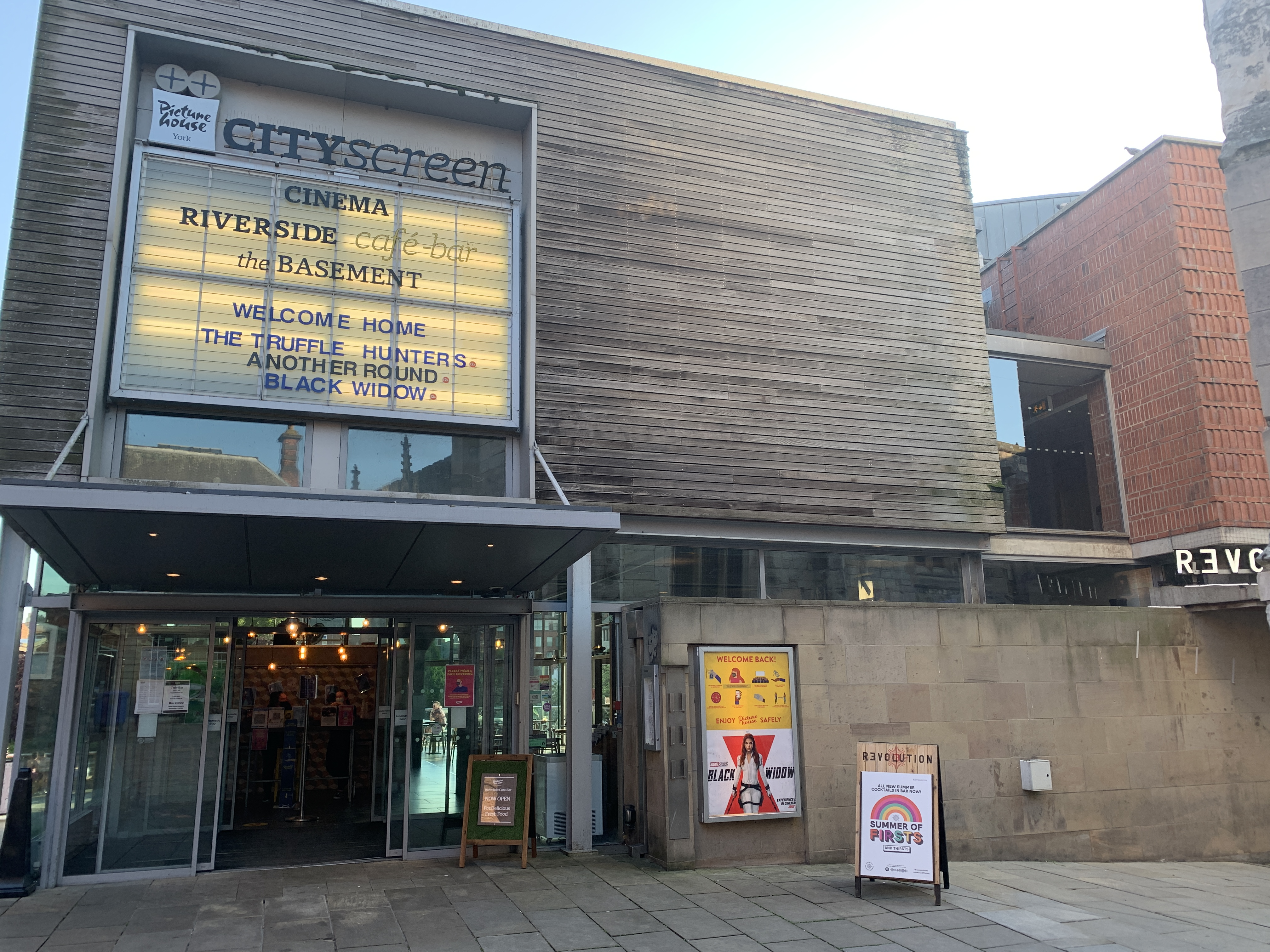 With the mercury rising and the air conditioners in York’s cinemas proving tempting, we’ve brought together reviews of six films all showing locally in York this month.

With Cate Shortland as director, Marvel’s Russian caper brings a character-driven focus to the MCU’s return. Anchored by our new favourite Russian (well, American and British) family – in which David Harbour, Rachel Weisz, Florence Pugh, and Scarlett Johansson are all on fine, crime fighting form.

Family oriented dramatics and decent writing progress a somewhat mistreated character beyond the hair flicks and sexualised secretary kicks of earlier entries, as Disney continue to gloss over their problematic past. It’s a shame that they can’t fix their 3rd act problem, which continues to plague many of their superhero stories.

Aside from the family-based fun, it is frightening how forgettable a lot of this film is. A Russian cocktail of terrible accents and average action, held together by the central star’s delightful chemistry and the family-oriented themes. In fact, the family stuff held such a focus that I was half expecting Vin Diesel to crash one of their family dinners and take a seat at the table.

There is no doubt that this film would have benefitted from a much earlier release – perhaps sitting more comfortably amongst the ‘Phase Two’ gang of the MCU. And, with multiverses, variants and time-warping magicians causing havoc elsewhere in the universe, I can’t help but feel that this one will get slightly lost in the mix. More vodka anyone?

In 2012, Thomas Vintenberg directed The Hunt starring Mads Mikkelson as a man wrongly accused of sexually abusing a child. Although hard hitting, this drama saw the stars align and two kings of modern Danish cinema create an impressively disturbing film. Their most recent collaboration depicts the story of four teachers who test to see if increasing their blood alcohol level can lead to more fulfilling and happier lives – of course, this leads to mixed results.

The beauty of Vintenburg’s work is its ambiguity. On the one hand it’s a life affirming, joyous ride that teaches us more about life than it ever could about a drink. And, on the other, it’s a genuinely depressing affair that makes one dream of the days when all Mads had to worry about was false accusations in the playground. I suppose it all depends if you’re a glass-half-full or glass-half-empty kind of person.

Another Round or Druk (it’s Danish title meaning ‘binge drinking’) is a tour de force of energy and emotion. Perfectly pitched as a dramatic comedy, it carries the fluctuating drunken emotions of a boozy night out – never failing to pause for harsher, sobering moments of reality which call back to Vintenburg’s ‘Dogme 95’ days.

It’s a delight, and is as deserving of the Best International Feature Oscar as any film in recent memory.

Quentin Dupieux’s latest has killer style but limited substance. Deerskin tells the tale of George, a man obsessed with his quest to acquire as much deerskin clothing as possible. It’s an often solitary endeavour that uses absurdity to great effect, as we see the lengths he will go in pursuit of his singular goal.

Jean Dujardin gives a stellar performance as George, conveying a distinctive, charming weirdness that carries the whole picture. It’s a surreal film that blends comedy and horror through its jacket-related antics. However, over its relatively short runtime, it never quite clicks into place. The two themes aren’t given enough time to develop together or independently for the knockout punch it could have had. Deerskin gets under the skin, but not far enough.

At its best, Deerskin is a dark critique of consumerism; one that has a novelty that doesn’t outstay its welcome but doesn’t stick around long enough to give the action on screen more meaning.

A relaxing, wholesome romp that takes us on a trail with a group of truffle hunters and their canine companions. Set in the gorgeous forests of Northern Italy, excellent cinematography elevates this documentary into a visual treat. It’s a world apart from York and well worth a visit.

The coolness and dampness of the forest is felt in rustles and digging in the dirt. We’re given a front row seat through the use of an excellent ‘dog cam’ that has us shaking off water and foraging through the undergrowth. Co-director Gregory Kershaw has spoken about his aim of showing how nature can be part of your daily life and The Truffle Hunters certainly succeeds.

Much more than just a film about truffles, it’s easy to get lost in their way of life; with a loosely connected bunch all united by their shared passion. It lets the audience experience a different pace of life yet never outstays its welcome. An amble through the hills is quickly interspersed with the thrill of a dog’s chase; there’s no dawdling even at 80.

Captivating to the final frame, The Truffle Hunters shares a passion that transcends generations. It’s a treat that shouldn’t be missed.

Lin-Manuel Miranda, as polarising as his online presence can be, can write a hell of a song. In the Heights is full of such songs, and they hold your attention for most of the film’s runtime – and I mean most. The film is just too long. At 2 hours and 23 minutes, the film could’ve benefitted from just a little bit of chopping and refining.

Anthony Ramos takes up Miranda’s mantle as Usnavi, a plucky young guy living in the Washington Heights. He has moved over from the Dominican Republic, and is working to establish his bodega, whilst balancing family commitments and an unrequited crush on Vanessa, the free-spirited, beautiful, and hard-working girl who lives down the street.

While Jon M. Chu’s direction isn’t particularly distinctive or eye-catching, it serves the needs of the story well, and never detracts or distracts from the music, which is rightly at the centre of the whole experience.

Miranda’s writing gushes with a childlike innocence. It’s just fun. Actually fun. Put a smile on your face for the next couple of hours kind of fun. As cinematic musicals go (looking at you, Tom Hooper), it’s better than most.

I am really comfortable saying that this is one of the worst films I have ever seen. Although the first one was really nothing more than a cash grab from Michael Jordan’s Nike TV adverts, it was cleverly self-aware, actually funny, had some quality animation, and was very obviously marketed at kids. This one doesn’t know who it is for. When your kids film has cameos from A Clockwork Orange (1971)’s droogs and Bette Davis in What Ever Happened to Baby Jane (1962), something is going horribly wrong.

I feel like at some point this might’ve been pitched as a parody of the recent wave of cameo-ridden crossovers. Instead, it has fallen victim to all of the same tropes. It doesn’t even pretend to be self-aware and instead revels in the corporate glee of shoving every licensed character it can get in your face.

In it, LeBron James and his son are captured and digitised by Don Cheadle’s Al G Rhythm (sigh) and sent to different worlds. To escape, LeBron has to win in a game of basketball. So, LeBron James and Bugs Bunny (who, at one point, horrifically mutates into a Big Chungus cameo) task themselves with recruiting and rescuing all of the other Looney Tunes from various Warner Bros. Properties. They travel into the world of Wonder Woman to pick up Lola Bunny, into the Matrix for Tweety and Grandma, and, I am not joking, this is not a joke, into Casablanca to pick up Yosemite Sam.

Don’t watch this. Don’t give them your money. It’s like watching propaganda. Not even successful propaganda at that. You can almost hear the executives at Warner Bros. desperately scrambling to find anything they can sell to you.