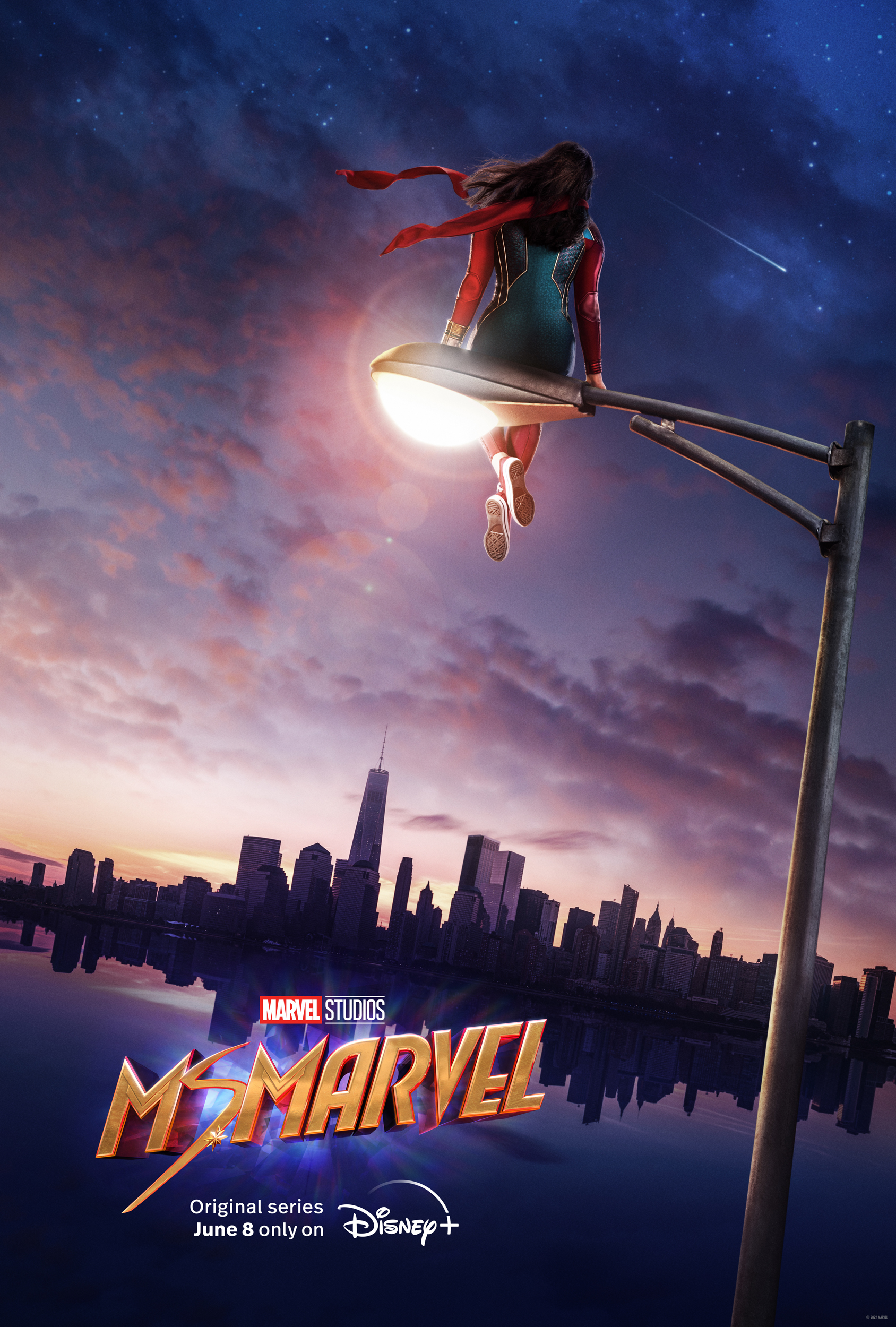 If you’re a Captain Marvel Stan, or even a casual Marvel fan, then you likely spent Wednesday night curled up with a slushy, some chocolate, and your Carol Danvers pop figure, ready for the first epic episode of Ms Marvel!

Refreshing, vibrant, creative, and with cosmic power just pulsating out of every frame, this new Disney Plus show follows a Muslim American teenage (and superhero megafan), Kamala Khan, as she gains the very powers she’s always dreamed of and becomes just like her idol, Captain Marvel.

Vellani’s character, Kamala Khan, acts as almost a perfect reflection of real world Marvel fans. Passionate and imaginative, she boasts a full heart for her heroes and a head in the stars, something Vellani embodies perfectly. A first generation Pakistani teenager, Vellani is also a true Marvel fan, with deep knowledge of the comics and movies and a relatable, infectious energy that shines throughout this press event.

Describing the unique relatability of her character Vellani highlights, “ Ms. Marvel always understood fan culture on such a cellular level, and it just really elevated the storytelling in a really unique way… that fascination and excitement is so shared with real-life Marvel fans, so that’s why we relate to her.”

In retelling the story of her casting, Vellani even mentions knowing exactly which comics the audition sides were taken from! She describes “my 10-year old self is gonna hate me if I don’t even try…and then I got casted on the last day of high school.”

“It’s been a big part of my life before I even got casted, and so I’m just excited that people can finally, you know, see what I saw when I picked up those comics for the first time and fell in love with Kamala and her world.”

A love of the comics clearly reigns amongst this show, as executive producer Bisha describes “Every single person involved in this project loves those comics deeply, personally, from their full hearts.  And I think we’re all committed to that love.”

In particular, writer and producer Bisha K. Ali recounts  the conversations about regarding the existence of this live action Kamala within the wider MCU. “How’s she gonna fit into this web of story-telling that Marvel Studios has done… while staying true to this beautiful incredible character that Sana and her team crafted.”

Kevin Feige shows great excitement towards the bringing new characters to the screen, and is particularly enthused by “then having her transition into a feature (the upcoming film ‘The Marvels’) ”

Alongside comic devotion, representation also occupies an primary element of the conference and this new story. Bringing the MCU’s first Muslim and first South Asian superhero to life, Ms Marvel is driven by the creation of authentic and honest depictions of family life.

Mohan Kapur (who plays Kamala’s father Yusuf) has a simple answer to the question of “what does is mean for members of the south asian and muslim communities, members that haven’t traditionally seen themselves on screen?”

“This is not a political statement.  This is a story of one family, one girl.  But it’s so beautiful. It’s the story of a family in a land that’s not their own, but they’ve called it their home.”

A heartwarming sentiment that immediately prompts gushing praise from his costars, and hesitation from Saagar Shaikh (plays Kamala’s brother Aamir) who must now follow such eloquent phrasing.

Commenting on the authentic cultural references sprinkled throughout the show, he states “It was really, pleasant.  It made it really easy for everybody to do their jobs because, everybody working on this show is like Muslim or South Asian, and we all got the references.”

Directing duo Adil El Arbi and Bilall Fallah describe relating to “that identity crisis of Kamala Khan.”  And then we met the great Kevin Feige, and we said, “Yo, we cannot, not be part of that.”

Arbi continues, “being part of the MCU and doing it in such a way with the first Muslim superhero, it’s just beyond a dream.  So that was really my… forever grateful.  Alhamdullilah (praise to God.)”

The crew delve into the more technical planning behind the visualizing electric, refreshing and vibrant show, with Arbi highlighting a need to “translate (Kamala’s)  imagination and her fancy world in a cool way”, choosing to inject an element of Spider-verse style animation into the scenery.

The episodes also boast an energetic and diverse, Asian driven score, “bringing together all the generations, you know, you know, we have old Pakistani, old Bollywood, and then modern-day pop music. “ Vellani says.

Producer Sana Amanat describes the refreshing experimentation within Ms Marvel’s costume design “What was really fun about I think this, was adapting the comic book design into something that felt like a super suit that felt very Marvel, but still authentic to I think what the comic did and to her heritage.”

Even additions such as Yasmeen Fletcher’s character Nakia wearing a hijab was thoughtfully discussed amongst consultants, cast and comic writers, with Fletcher feeling honor in owning “such a beautiful line and moment of identity of, like, this is not something to be ashamed of.”

This message of identity and representation shines from all the cast and crew. Meera Menon describes how “being able to see yourself in someone” is “incredibly powerful.  It’s possibly the most powerful thing we can do,” while Sharmeen Obaid-Chinoy enforces that “the superhero bit was just that I always believe that everyone has a superhero in them; they just have to activate it.”

Passion and childlike fun runs through every member of this show, with the highlight of the first episode, Avenger Con causing impassioned glee amongst the cast and creatives. Amanat remembers, “it was like a bunch of kids running around”, while Feige describes how cast and crew (including Tom Holland) from the neighboring set of Spiderman No Way Home would keep “sneaking over to see and attend Avenger Con.”

Feige’s promise of a real life AvengerCon was already incredibly exciting… and then the moderator asked York Vision’s question (to say I jumped is an understatement.)

We asked, “whose powers would you get if you could become your superhero idol?” With the intense thoughtfulness of a comic fan, Vellani changes things up by providing an X-men answer, “Professor X.  I want telepathy to get inside a few people’s minds.”

A question from NewRockstars’s Eric Voss derails the conversation briefly as the cast (and myself) fangirl a little over this prominent Marvel youtuber appearance. Vellani exclaims “ I have billboards with my face on it.  But like, him saying my name correctly and, like, breaking down our trailers was bigger than any billboard ever.”

It’s this sheer natural passion that really sparkles throughout this conference. Kevin Feige, in particular, emphasizes his excitement of the new direction this show takes, “the Marvel Studios logo doesn’t promise a particular group of characters in a particular exact tone.  It promises a spirit and a style and a vibe and an emotion, I hope.”

This show (and its press conference) certainly creates a unique and passionate spirit, brimming with creative and diverse vibes, ecstatic and impassioned emotions and, most of all, a grounded adoration for the marvel universe from everyone involved.

Offering love, diversity, powers and sheer cosmic energy, the new television series Ms Marvel is a must watch, and airs Wednesdays on Disney Plus.