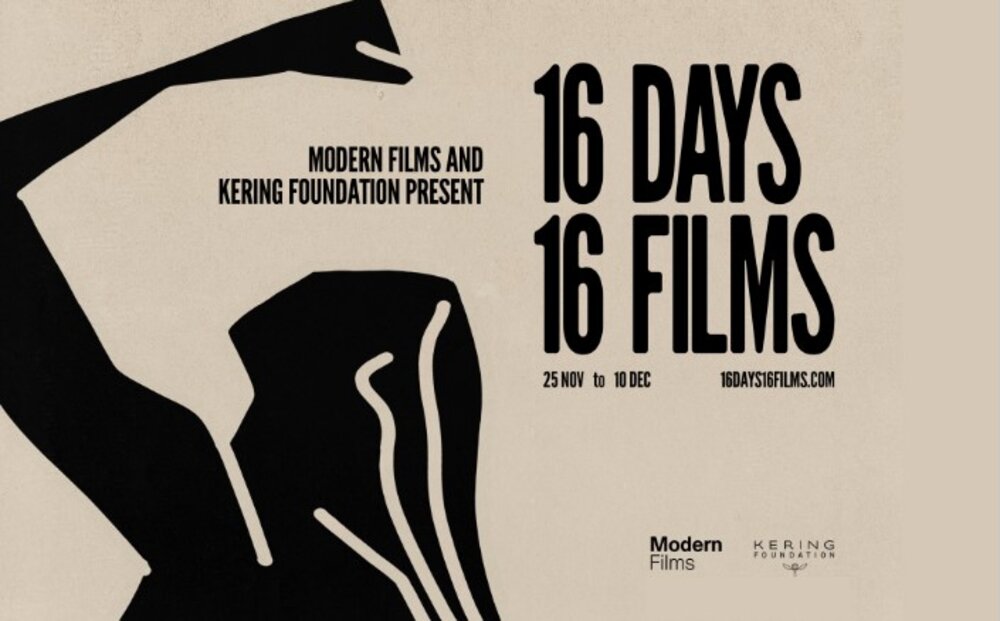 ’16 Days 16 Films‘ is a short film initiative presenting 16 stories by female filmmakers across 16 days, in aid of activism against gender-based violence. York Vision got the chance to speak to director Charlotte Daniel and her lead Sophie Anne Scarfe to discuss their new short film Eyes Down, the initiative and more.

Inspired by the UN campaign ’16 Days of Activism Against Gender-based violence’ which has run since 1991, ’16 Days 16 Films’ holds their initiative every year (25 November – 10 December). Now in its third year, the programme culminates in an awards ceremony, hosted this year by Anna Smith; a film critic and member of the ‘Girls on Film’ podcast. It also featured special guests Ashley Judd, Sarah Gavron and many more.

Eyes Down was created by Charlotte Daniel, an independent writer and director, who previously released the short-film CARMEN (2019). Her 2019 short gained nominations for ‘Best Director’ and ‘Best Script’ at the Scottish Short Film Festival. Eyes Down has had similar success, as it was chosen for the initiative from a selection of 350 films. The film is a brief, yet powerful portrayal of the trans experience of everyday life. The star of the short, Sophie Anne Scarfe, a trans woman of no filmmaking background, equips the story with the realism it deserves;  Scarfe isn’t simply acting a part, but representing her own everyday experience, as well as that of many others.

The programme is a platform for films capturing vital issues such as domestic abuse, sexual violence or inequality. Charlotte discussed why she felt it was important to enter her film into this initiative. “I wanted to make something that had a really strong message and that was something that could really do some good in the world. I wanted it to be a positive story, I wanted it to be something that wasn’t just a film for film’s sake…I sort of looked at it and thought this is a really good way to have a really positive impact and have some positive representation in the media, about being trans.”

Charlotte further discussed her intentions when creating a short that targets issues of such importance. “For me, it’s to be kind. You don’t know what other people are going through. Live and let live really…you don’t know how a small act of kindness can really affect someone’s day and make someone feel so much better about themselves”.

For Sophie, the topic of the short was as close to home as it gets. Sophie mentioned that she had “been rehearsing this one for quite some time”. Eyes Down certainly possesses elements of documentary verité, exposing a brief snapshot of the life of someone perceived to be eccentric, or unusual by many areas of society. Sophie saw the short as necessary exposure for herself and her community. “I just got fed up of hiding. Here I am, accept me. So, it was an opportunity to show the world”.  Yet with this came the pressure to get it right. Sophie felt the weight of the trans community on her shoulders, and the necessity of doing the trans experience justice. “The only difficulty was that I put pressure on myself to get it right. Get it right for the crew that had turned up for Charlotte, and for my friends, my community.”

’16 Days, 16 Films’ and other platforms are able to tell the stories that the mainstream cinema screens neglect to. Although modern cinema has experienced a sweep in the positive direction, notably this year with Sarah Gavron’s wonderful Rocks and Channing Godfrey Peoples Miss Juneteenth, it is still largely down to social media dominated movements to display the diverse creative talents out there. Charlotte expanded upon this: “I think that mainstream cinema, I guess, is you know, it’s all about bums on seats really…there is a reason that these initiatives are around and still have to be around. We face so much inequality in the world, and there’s so much work to be done…there is an audience for it and people do want to watch and learn about these subjects and want to be affected by them because you know that’s the reason we go and watch films, we want to learn something or feel something.”

One thing that remains uncertain is how audiences will begin to adapt and embrace the change of focus in modern cinema, and if these initiatives have the capability of pushing the industry in a positive direction. It is clear that this path has been opened, but there is certainly a long way to go. As Charlotte mentioned previously, the ultimate deciding factor in mainstream cinemas is financial gain, as without this they wouldn’t survive. Therefore, in the current climate, the story that makes more money, is the story that will be told. However, new ground is constantly being made. Patty Jenkins and Gal Gadot show off a 21st century female-empowered sensibility in Wonder Women 1984, and Happiest Season became the first festive rom-com with a gay couple as protagonists.

It is evident that certain steps are still to be made, particularly considering the abundance of initiatives providing the support, awareness and representation that the mainstream market regularly fails to. Charlotte gave her thoughts on the power of initiatives such as ’16 Days 16 Films’. “I hope that with this, and others like ‘Times Up’, that things are changing and that we’re addressing very much inbuilt inequalities within the film industry for sure…representation is important, for someone like me, you can walk onto the set and see someone like you doing that role. And you think wow, this is great, this is more attainable, this is within my reach…we are first seeing now the benefits of having all these different types of voices, in all these different types of shows and films and stories that we’re getting to learn now. Because we’re letting other people have a seat at the table and tell these stories”.

Charlotte speaks from the perspective of an exciting creative talent who understands the financial necessity of the cinematic system. Sophie provides the viewpoint of the ordinary cinema viewer, offering her desire to see greater representation on mainstream cinema screens. “The more you embrace diversity I think the more interesting it becomes…there’s only so many ‘wham-bam’ action movies that anybody wants to watch”.

Sophie’s views are certain to be shared by many;  they are an indication that offering a unique selection of diverse tales may be more successful than our local multiplexes might assume.  Telling more unique stories through cinema, along with the usual blockbuster treats, will certainly engage the attention of a new audience, enhancing the financial capability of mainstream cinemas. Of course, money shouldn’t be the incentive, however it will always be the primary motivator behind screen listings. Charlotte’s short film and numerous modern initiatives are hoping to build interest beyond those directly affected by their cause, and the gradual reopening of cinemas may trigger a new approach, following in the footsteps of independent cinema screens.

The topic of ‘wham-bam’ action films led the conversation with Charlotte and Sophie to Tom Cruise and his recent outburst of anger towards set assistants during the filming of Mission Impossible: 7. Charlotte explained the double-edged sword of Cruise’s rant: “I’ve actually worked on a couple of Tom Cruise films in my day. He’s a fantastic machine, and generates so many jobs, and keeps people employed…but there is a power dynamic and it’s difficult to say without having been in the situation. But I’m working at the moment on set, and it’s difficult with the COVID restrictions, everyone tries their best…it’s a very difficult thing. I can see both sides of the story”.

Cruise’s aggressive antics are an obvious suggestion of the importance of his new projects in allowing the continuation of large scale, big budget films. In fact, it doesn’t get much bigger than the energetic thrills of this action franchise. Cruise’s upset is understandable; Mission Impossible is currently setting the gold standard for COVID safe filming projects, providing essential employment for many lower income crew members. However, the self-righteous rant is a reinforcement of the egotistical power-trip mentality rampant in the Hollywood movie system. Cruise is only reinforcing his surreal scientology stereotype, for better or for worse.

As the interview drew to a close,  Charlotte and Sophie began to discuss the last 9 months of locked-down life, and the source of creativity this has been. Sophie is a teacher by day, chuckling in the interview, “I’m an art teacher – can’t you tell?” She has also found the time to work on her book, a whimsical tale of an eccentric trans lady- “a bit like Tom Sharpe with a pretty skirt on!”. Charlotte found similar creative inspiration,  as she finished writing a sketch with friends and mentioned plans for a documentary idea that is currently in the works.

Both women were proud of their achievement working with the ’16 Days 16 Films’ initiative. For Sophie, it was a chance to champion trans representation for her friends and community, and for Charlotte it was a chance to “put her money where her mouth is” and support something vital whilst doing what she is so passionate about. Eyes Down and the platforms for diversity and empowerment which it features on are a sign of the bright future for cinematic representation and story-telling.

While it is clear that mainstream cinema is currently dominated by financial motivation, particularly in the current COVID crisis which has left many cinemas struggling for survival. It seems that diversity is becoming a central focus for some, and in the future, hopefully this may be for all. Programmes such as ’16 Days 16 Films’ are the reason these changes may soon become a reality.

Concluding our interview, Sophie reached out to students at our University: “For the trans community in your University, I’ll say hello to them all and I’ll give them a big kiss. Whatever issues you might be having, it’s going to get better. You hang in there.”

If you would like to watch some of the wonderful short films, or learn more about the initiative please visit: 16 days 16 films.

You can also find Eyes Down directly here: Eyes Down – 16 Days 16 Films (frb.io)