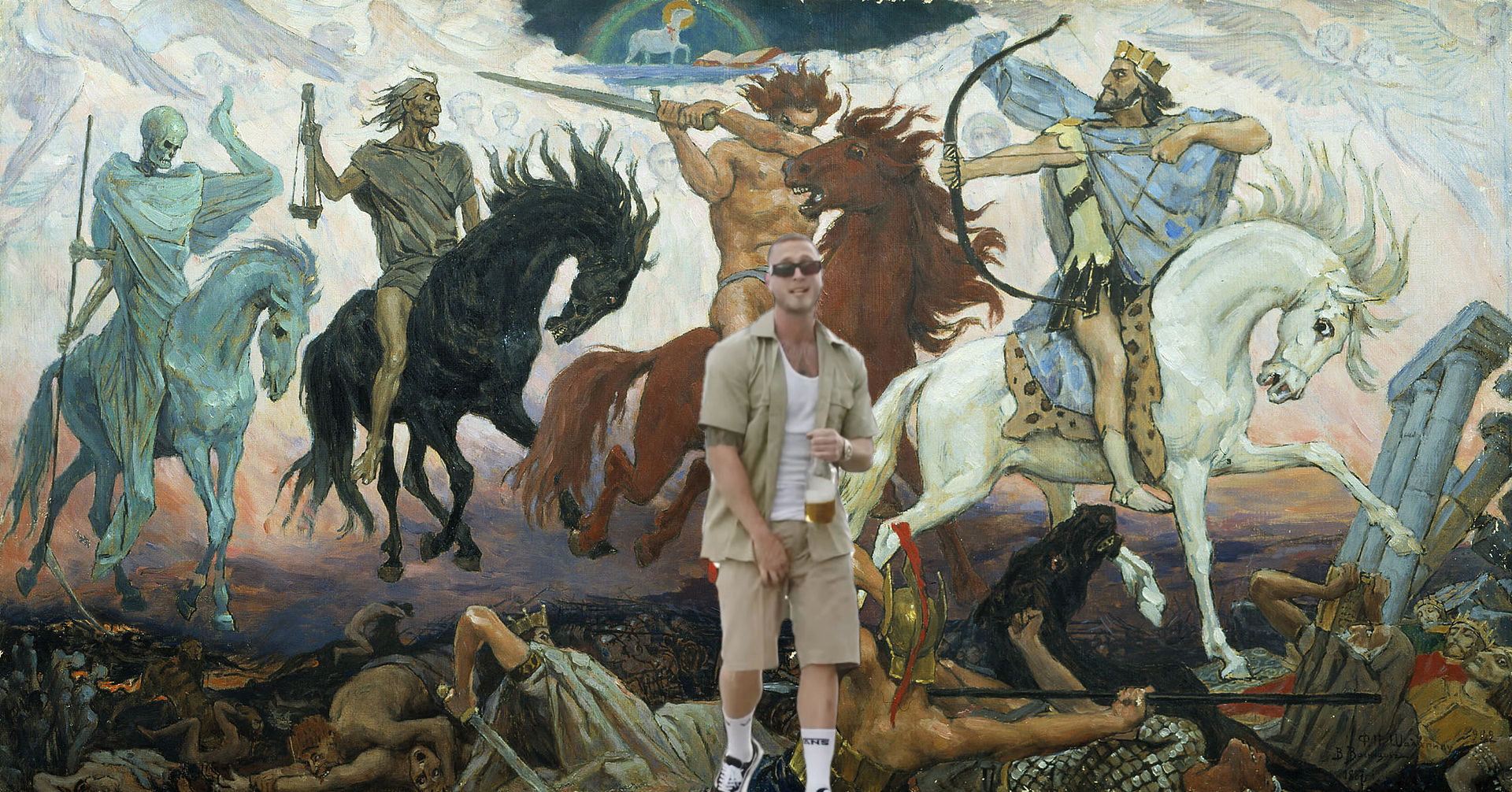 The Christian faith holds a promise that at the end of the world, four horsemen shall descend upon the earth: Pestilence, War, Famine, and Death. Although these were enough to dissuade the average God-fearing medieval peasant from sin, it seems that John the Apostle neglected to mention the fifth, most terrifying rider of the apocalypse: Chet Hanks.

The son of Hollywood superstar Tom Hanks has faced ridicule over the years for his attempts to break into the mainstream off of his own merit, including his recent declaration of a new summer of love(?) on Instagram. Before making naïve announcements of fun loving summers, Chet caught the attention of online audiences for his emotionally-stunted announcement that his parents had caught coronavirus. On top of this, he is also being sued for $1million by his ex-girlfriend on abuse claims.

A synecdoche of Cali rich-kid culture, Chet Hanks may have brought Western civilisation back a decade or so with his latest endeavour, declaring that he had prophesised the coming months of 2021 to be a “#WhiteboySummer”, a time for “vanilla king[s]” to embrace themselves for their true worth without putting others down (i.e. “#Respectfully”).

Essentially, the underlying philosophy of this social movement is that Hot Girl Summer and White Boy Summer are two sides of the same coin. And frankly, why not? Young people increasingly feel anxious about themselves and their bodies, and I think that the students of York could learn a lot from his outright rejection of humility. Although it’s sensible to dismiss the frat-house vibes that Chet puts down, we can still appreciate his confidence and open attitude.

I can’t help but draw comparisons between Chet Hank’s message of unity and confidence in the California sun to that of Kendall Jenner’s Pepsi advert from the spring of 2017, when anti-police sentiment in America was washed away by the refreshing taste of a nice, cool can of Pepsi-Cola™. It’s making a point, sure, and maybe it is meant in a genuine way, but I can’t see it having any impact on people’s lives apart from making the children of celebrities feel good about themselves.

Self-styled as Hanx, proffering a thin veil of separation between himself and his household, Chet has chosen to capitalise on the viral-ness of his Instagram story with a range of hideous merchandise and a 2 minute, 21 second song complete with a music video. Say what you will about the man, but he’s certainly been able to turn a profit from his 15 minutes of fame, crystallising the idea of White Boy Summer as an institution rather than an overnight fad.

As a member of the York Vision Music Team, the burden of reviewing this track has fallen upon me, and it is indeed a heavy cross to bear.

Twelve seconds into my first viewing of Chet Hanx – White Boy Summer (Official Music Video), my computer’s audio stopped working – “no, stop!”, I could hear it say, telling me that there were 70 million other songs on Spotify that I could be reviewing instead. This cry for help from my laptop was ignored as I reinstalled the drivers, my quick-fix likely guaranteeing me a spot in front of the Cyber-Hague after the robotic uprising takes place. Such is the life of a music critic for a student publication.

The video itself was surprisingly difficult to find on Google, as the comments speculate that it was shadow-banned (i.e. hidden but not removed) by YouTube. According to a 3-hour podcast by All The Smoke, the production team behind the video, Hanks’ project was at the tail end of a “creative bender” that rolled from having a #1 Billboard hit to, well, this. The podcast also hinted at a non-fungible token of the music video – I’ll let you judge for yourself if the investment is worth it.

If you put a gun to my head and asked me to recite any of the lyrics: tell my wife and children I love them. Hanks’ delivery of lines is forgettable and his lyrics infantile, but he does manage to keep up with the beat – I suppose that’s a positive at least. The instrumentation is overmixed, giving the listener the feeling that every element of the song is in competition with itself, each trying to out-do the other with record scratches, sampled moans, and a stock West Coast beat. No information exists as to the provenance of this beat, but they should probably accept that they’re unlikely to make it to the big leagues. Similarly, the record label accountable for this travesty has no presence online other than a channel with 30 subscribers: their Twitter is suspended, their website no longer exists, and their Instagram is private with no followers. It simply does not exist outside of ‘White Boy Summer’ merchandise, which leads me to suspect that Hanks is personally behind it.

I’m not going to pretend that ‘White Boy Summer’ is a piece of high art to be cherished for generations to come; in its own right, it is tacky, forgettable, and uncomfortable. Ignoring nationwide discourse on cultural appropriation and objectification, the music video brings together imitation-Jamaican slang (not the first time for Hanks, as he spent an entire evening at the Golden Globes attempting a rudeboy voice) with obscene amounts of twerking. All the while, Hanks is donned in an obnoxious pair of sunglasses and a white t-shirt with the helpful message of “stop hate” scrawled across the back in Germanic font. Occasionally, the video tastefully cuts to Hanks overlooking Los Angeles with a Jamaican flag wrapped around him like Usain Bolt.

Ultimately, it doesn’t really matter what I have to say about any of these things, especially since Hanks’ attitude is very much based around not caring what the haters have to say. He’s sure shown me.