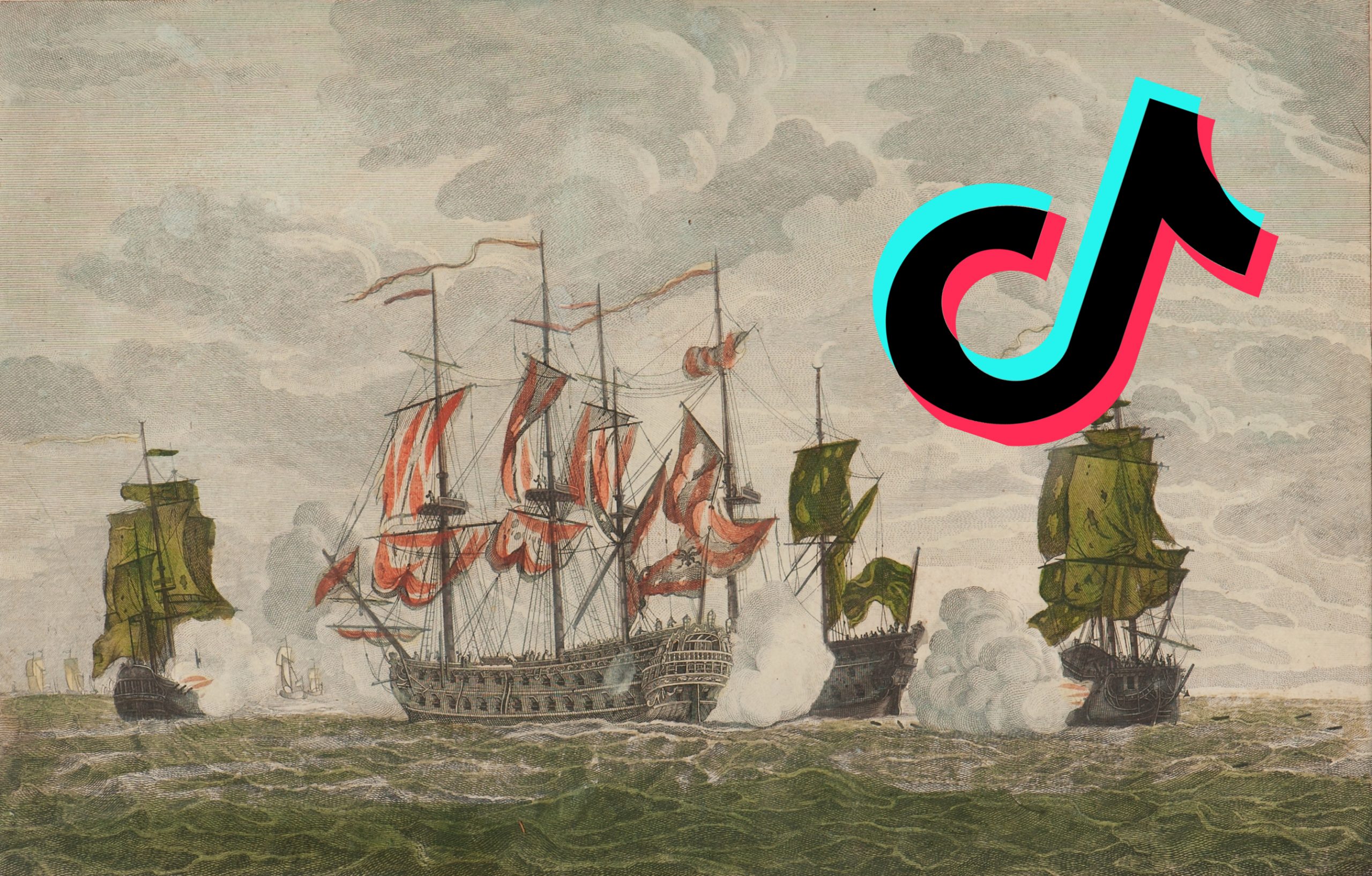 Most students, I’m sure, have fantasised about dropping out of Uni while a deadline looms – but how many have considered taking to the high seas for a sense of swashbuckling freedom away from the lab reports?

Swapping Foucault for the salty sea air seems increasingly appealing for many as sea shanties have become an overnight sensation, in part due to their success on TikTok. To get you setting sail, Vision have put together 10 excellent recordings of these classic songs that tell us about life on the open blue, the excitement of whaling, and the sultry maidens of unfamiliar ports.

We’ve also included some modern takes on the genre for those who get seasick easily, and songs that don’t fit the technical definition of a “shanty” as a working song, but still encapsulate the folksy feeling of a time when the “poop deck” was no laughing matter.

The a cappella songs have their origins in the Age of Sail, where they were sung by crew as a form of entertainment, and as a way to keep rhythm aboard the ship. They have nestled themselves firmly in the popular imagination alongside the Jolly Roger as a vestige of a time gone by.

More recently, a Scottish postal worker went viral for his covers of classic shanties, and Bristol-based group The Longest Johns have seen similar success on the Spotify charts. Their explosive commercial success is unprecedented as Google records that searches for the term “sea shanty” are at an all-time high, although have been increasing in popularity year-on-year for some time now.

Of course, York was swashbuckling before it was cool – in the 2008/9 academic year, Mad Cap’n Tom was elected to the esteemed position of YUSU President with a gimmick of pirate-related policies. Originally running as a joke candidate, he secured more than a thousand votes in one of the more memorable campaigns fought on campus, promising cutlasses for all and “sailing” around Heslington on a cardboard ship. He later (unsuccessfully) ran for Parliament with the same pirate persona in the seat of Cities of London and Westminster, and is now a well-known YouTuber.

Here’s a rundown of our top shanties and maritime bangers to get you smelling the fresh sea air:

Wellerman – The Longest Johns
The song that began the recent “wave” of obsession with sea shanties (pardon the pun), this shanty originates from New Zealand. The Weller Company was a well-known supplier of goods like “sugar and tea and rum”, and those who worked for it were known as Wellermen.

This song features a ship embarked on a Moby Dick-esque whale hunt by a crew longing for the comforts of home. The Longest Johns have dominated the sea shanty revival of recent years, with this being their most well-known song and running up 10.5 million streams on Spotify alone – and it’s understandable why, as this track brings together crisp harmonies and memorable lyrics with no accompaniment other than the voices of the group.

My Mother Told Me – Perły i Łotry
Polish group Perły i Łotry translate a Viking poem into a powerful story of destiny and uncertainty with a slightly intimidating air, as a single verse is repeated over, singing how they will surely “hew many foe-men” on their steady course to Valhalla. Delivered with a deeply resonating bass singer, it has a powerful effect on the listener as they imagine a time before the Age of Sail’s swagger.

Leave Her Johnny – Kraken Shanty Band
Accompanied by droning strings and banjo, this version of a shanty standard emphasises its emotional origins, with a departure from the maritime style to one more familiar to listeners of landlubber country and western. This song is so popular among shanty groups that it was hard to pick a particular recording artist, but the Kraken Shanty Band makes the listener feel as if they have a genuine connection to the ship: this song was traditionally performed on the last voyage of a vessel, when all hands would leave the ship and return to the somewhat alien world of life on land.

The Flying Dutchman – The Jolly Rogers
Driven by a menacing acoustic guitar, the shanty recalls the arrival of the The Flying Dutchman. This legendary ghost ship was a portent of doom for the sailor who was too far from home – it has been the feature of a Pirates of the Caribbean film and numerous Spongebob episodes. As the crew in this track try desperately to escape the wrath of the Dutchman, and the storm it brings with it, the song increases in urgency as the inevitable draws closer and closer…

Twiddles – Misbehavin’ Maidens
Shanties were traditionally, and perhaps unsurprisingly, a male-dominated style of music. In their original songs, this Baltimore-based group cleverly turns the hyper-masculine lyrics of the original shanties on their head to highlight the lives of the women in port who are so often unnamed and sexualised.

Nowhere in their performance would you think that they’ve diverged from the nautical norm of well-made harmonies and memorable lyrics, but this song actually eschews the romanticisation of life at sea for a sex-positive depiction of what the women get up to when the sailors are out to sea.

Eddystone Light – The Brothers Four
The Brothers Four are a widely-forgotten folk group from the early 60s that normally focused on a more landlubber style, but in this track they deliver a choppy tale of a lighthouse-keeper who marries a mermaid.

Kicking off with a strong “yo-ho”, the song reveals that only one of their offspring was human – the other two, a talking fish and a porpoise. It doesn’t take itself very seriously, but that’s exactly the strength of this folk track.

Rolling Down to Old Maui – Stan Rogers
Another song featuring the Wellermen, this more traditional shanty spotlights a solo voice for the verse, before promising and delivering a refrain that carries all the weight and emphasis of a crew returning from the bitter arctic to the paradise of Hawaii. This shanty is archetypal of the shanty, with longing, camaraderie, and a surprising level of harmonisation that you might not expect from a scurvy-ridden crew.

Roll Down – John Roberts & The Revels Chorus
Roll Down is another staple of the sea shanty genre, trading its rhythm and regularity (important for keeping time in group tasks) for a theatric and timeless melody, that tumbles from verse to chorus with plenty of opportunity for singing along – though you might get some odd looks on the bus.

Fire Marengo – Pyrates!
Nobody is quite sure what “Marengo” references, but the shanty covered here by Pyrates! is a bona-fide classic, as each one has slight variation – shanties were originally folk songs and so wouldn’t have had written lyrics, resulting in the classic shanties (especially those with short verses and repeated refrains) evolving over time as each crew slightly adjusted the lyrics to their preferences.

Pump Shanty – The Sheringham Shantyman
Born of frustration instead of hope or longing, this shanty curses the shipbuilder for their craft as the crew toil below deck to work the bilge-pump, a device that removes water that has found its way through cracks in the hull. With it, you can easily imagine the back-breaking work of life at sea.

The Sheringham Shantymen deliver this classic with enough spite and emnity to convincingly bring you into the cruel life under deck.

The Gael… Time Flies – Pirates for Sail
Many years before students learnt the art of drinking, it was the domain of sailors. Now, spiced rum is somewhat of a delicacy at house parties up and down the nation, and Pirates for Sail immerse you in this fine old tradition with their song about how time flies when you’re drunk.

I don’t think many people in York needed to be told that. With fiddles and foot-stomping, The Gael gives you all the Tortuga chaos you’ll ever need or want.

Roll the Old Chariot Along – David Coffin
This one ticks all the boxes of sea-shantydom, with roaring choruses, tuneful and irreverent verses, and a melody that you’ll catch yourself humming for the next few days (at least). The sheer depth of this performance allows you to revel in its performance, as if you were on a ship-of-the-line with a crew of hundreds. It would fit equally well on the high seas as in rugby stadium, and is truly memorable.

The artist has also made a fantastic interpretation of the same perennial pirate piece as “lo-fi sea shanties to study/swashbuckle to”, which we’re sure will come in handy for the next deadline as you sit and wonder what life would be like as a sailor in the 18th Century – not procrastinating, no, just considering an alternative career path.