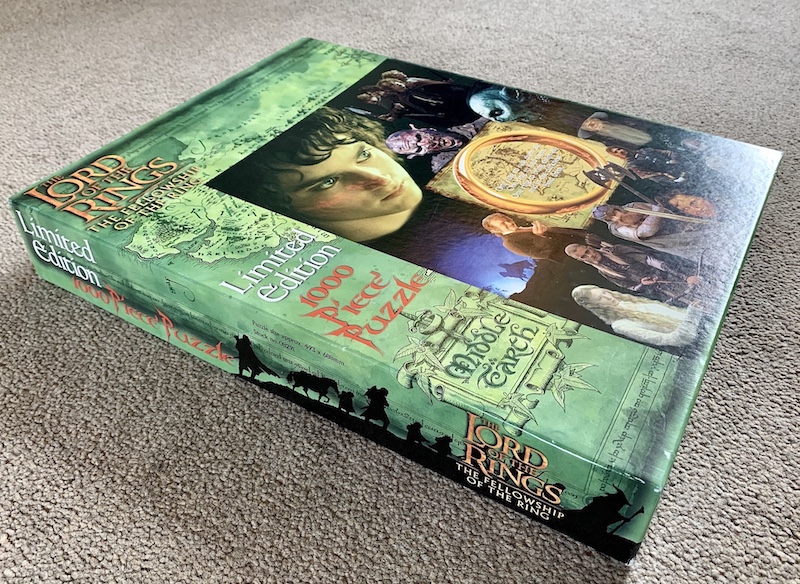 10am. Boredom had already struck. My brother and I decided to start the most challenging and unexpected journey of all; we began the jigsaw that had been collecting dust on the top of his wardrobe for the past six years.

To add some context, the jigsaw first came into my brother’s possession in 2014, when he bought it at a car boot sale in New Zealand. For the bargain price of $10 (roughly £5.20) he managed to take home a limited edition 1000 piece Lord of the Rings jigsaw, supposedly gifted to one of the movie extras after filming. Sounds cool right? Wrong. Having now pieced the blasted thing together over five painstakingly traumatic days, I can attest that this jigsaw is truly an accursed object. Apparently the woman who sold it to my brother said that it “belonged to her son” who was “an extra on the set” – in my opinion, a blatant lie. The box came to us unopened, sealed within the typical plastic wrapping that confirmed its newness and gave it some credibility as a special “limited edition” item. But cynicism prevailed, provoked further by the small image on the back of the box that told us to “Join The Lord of the Rings Official Fan Club”. I submit that the woman who sold it had successfully contrived to fleece an innocent eleven year old boy, stealing his hard earned pocket money and dispensing with 1000 tiny pieces of fake memorabilia, and here is my evidence:

Exhibit A: Simply put, the jigsaw is ugly. Made up of badly photoshopped images on a plain blue/black background (at this point my eyes can’t see the difference), the finished product doesn’t exactly boast artistic finesse. In fact, I doubt any real creativity went into it at all; each image of a character looks like a badly focused screen-grab, lazily cut and pasted on. The photos don’t even match! The blue face of one orc drastically juxtaposes his green brother, and one of the two Frodos is significantly more yellow than his counterpart. Whilst it’s ugliness may have been a strong imperative for giving it away, I struggle to believe this was the case. I’d like to think that the creators of one of the greatest film franchises of all time had both better skills, and general taste.

Exhibit B: One does not simply do a jigsaw, there is a level of careful thought involved. Time and energy must be spent on separating the pieces according to colour or shape, dividing edge pieces from middle pieces, distinguishing Frodo’s dark hair from the equally dark background (no simple task might I add). As the only member of my family that doesn’t require glasses in order to see, I often boast the best eyesight of the bunch. Yet in this case, I was forced to doubt the accuracy of my vision. Roughly 200 of the 1000 pieces were black, with no distinguishing features enabling us to sort them, let alone determine where they went. Such a massive design flaw not only made this part of the jigsaw nigh-on impossible, but also catalysed a plethora of health problems. There was the intense headache from thinking too hard, the dry stinging eyes from straining to notice any minute differences between pieces, and the numerous aches and pains from contorting ourselves around the kitchen table. I’d estimate that three of the total five days we took to finish this jigsaw were spent on these indistinguishable pieces, a battle against 200 orcs would have been a fairer fight. Attempting to fit each piece into the seemingly infinite number of potential slots was a harrowing experience to say the least. The woman’s son, the alleged extra in the movie, must have been a truly terrible actor to deserve such a gift.

Exhibit C: In general, the one good thing about completing a jigsaw is watching all the pieces slowly fit together to form a growing image. In some ways, this was true for this limited edition disaster-piece. As the days went by, we watched as Legolas, Bilbo, Boromir, Gimli and Gandalf slowly began to form. Even characters such as Saruman and Galadriel made an appearance, occupying larger sections of the finished piece than more major film characters such as Merry and Pippin. Yet, as the days went by we also noticed the absence of some of our favorite characters. This so-called “limited edition” jigsaw didn’t have an image of a lurking Gollum, or the super slick Elrond. There was no Arwen. There wasn’t even a picture of the eye of Sauron. Who needs to see the lord of rings on a Lord of the Rings jigsaw puzzle, right? It seems the space taken up by Elijah Wood’s face (practically more than a quarter of the whole puzzle) was more integral to the jigsaw than the figure after which the books and films were named. Maybe Peter Jackson got it wrong, ‘Frodo’ might have done better at the box office.

Exhibit D: The one piece. The one missing piece of the puzzle, or rather the piece that we thought was missing until we realised that it had been chewed up by the cat. Whilst I realise this does nothing to prove the woman who sold it to us was a liar, con-artist and gollum incarnate, I still maintain that the puzzle is cursed. Firstly, I ask what on earth possessed my cat to eat the jigsaw piece – the little angel must truly have been possessed to do such a thing, and thus, I blame the puzzle. Secondly, I’m sure I’m not alone in expecting a jigsaw gifted by the creators to be impervious to such forms of destruction. This jigsaw puzzle wasn’t defeated by a wily fellowship and hellish fire, but a rather small and timid cat. Thirdly, even if I do concede to my cat’s guilt, I’d say she was really trying to do us a favour. Her chewing of the final piece of Aragorn’s sword was a heroic attempt to destroy the monstrosity. She chewed a central, noticeable piece, throwing it into the metaphorical fires of Mount Doom to save us the trauma of encountering the puzzle in it’s full hideousness. As I said before, it’s ugly.

If the creators of The Lord of the Rings wanted to replicate the agonising journey to Mordor through the five day slog of putting together this jigsaw, they certainly achieved their aim. Yet I refuse to believe the fanciful history of this hateful jigsaw – to suggest that it was given by the creators of one of the best films of all time would be an insult to their genius. Though if by some miracle the story is true, part of me understands why the jigsaw found itself on that fated table at that car boot sale those many years ago. I doubt it came with a gift receipt, so＄10 was a definite win.

Whilst informing my brother that he was conned as a child was mildly satisfying, it fully confirmed my dislike of the jigsaw. At the start of the project there was excitement, hope. By the end there was misery, pain, and a strong resolution that the jigsaw’s fascinating history was indeed false. If it hadn’t been bought six years ago from a car boot sale on the other side of the world I’d definitely ask for my brother’s money back. Although I guess there were some positives to this experience. After five long days, and by no small feat, we finished the puzzle. We even managed to squish the chewed up piece into a semblance of its former glory; from a distance the teeth marks are barely even noticeable. Light ultimately succeeded against darkness and we won the battle. Though positives aside, the real moral of this story is this – be careful where you source your jigsaw puzzles, or you’ll pay the terrible price.

(Much to my dismay, the completed jigsaw now resides proudly on display in my brother’s bedroom. A precious reminder of a traumatising, but certainly memorable few days.)

One thought on “One Jigsaw to Ruin Them All”