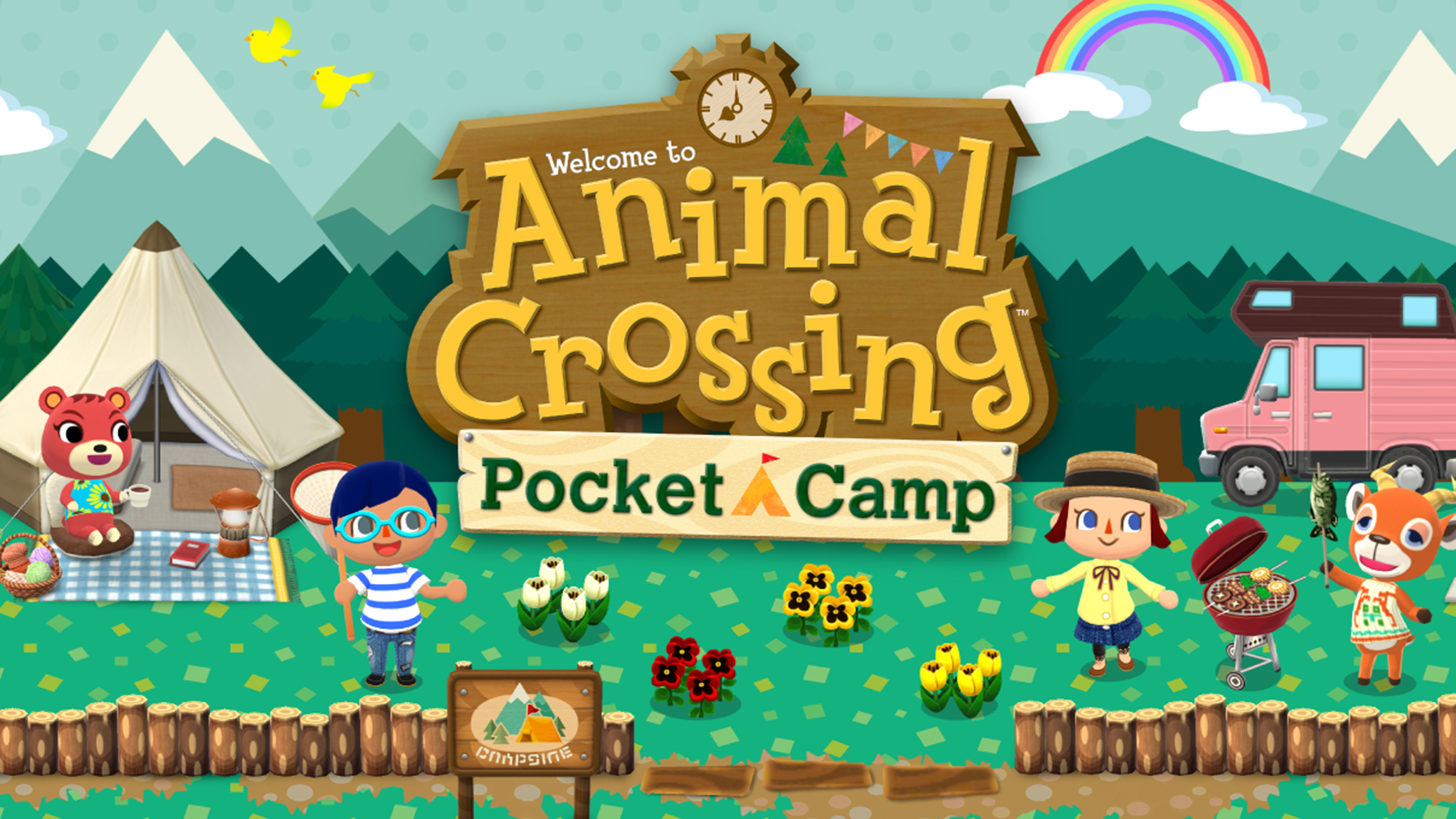 Animal Crossing (AC) has been a much loved franchise by all ages since its initial release. With the start of the COVID-19 pandemic, Animal Crossing: New Horizons served a new purpose, taking players into a brighter virtual world, full of adorable animal characters and aesthetic scenery.

Though, what about those without the Nintendo Switch. Do we have to miss out and instead face the cold harsh reality of our current world? Well, do not fear! There is something for us Switchless folk: the world of Animal Crossing: Pocket Camp.

Instead of being another villager or even Mayor like in the main series of games, you are assigned as Camp Manager by the much loved Isabelle. Your responsibilities as Camp Manager include:

Since AC:PC is an app, it is built on how many other game apps operate. Many of the features rely on real time. The first example are the daily tasks that players complete for rewards. This is to keep players engaged, though it is only daily tasks and tasks that are part of events that have time constraints.

Other examples include waiting for fruits and flowers to grow or furniture being crafted. To speed up crafting times, AC:PC introduces us with a new micro-currency: leaf tickets. They are worth more than bells and can be used to speed up crafting/waiting time and buy special items of furniture and clothing/accessories. Another feature that AC:PC encourages is making virtual friends with other players. Doing this allows the players to buy and sell certain items. Having friends also allows you to water their plants, which gives you friend powder (another crafting material).

Pocket Camp has additional unique features which include:

I’m quite an amateur when it comes to all things Animal Crossing – I find it’s best to listen to expert opinions on all such matters. Before reading my final thoughts, have a read of some opinions from York’s own Animal Crossing Society:

Lucy Waldegrave Newton (Treasurer): “I played Pocket Camp when it was first released, it was a fun little game to pass the time and the competition between friends trying to be the highest level was engaging enough, however it quickly ran out of features to offer and I soon put it down.

“I picked it back up in early 2019, not many months after New Horizons was announced and became addicted. Tons of new features and objects had been added and they had obviously gotten themselves into a good routine of running themed monthly events with special purchasable items, activities, and prizes. While the main in-game currency of bells had become essentially worthless with the “Leaf Tickets” that you buy with real money being the only real way to purchase the vast majority of items, they weren’t that difficult to obtain in-game. Leaf Tickets were given away almost daily, as special prizes in the monthly events, and whenever a new feature didn’t get a good reception from the fans it would soon be fixed and Nintendo would give away hundreds of Leaf Tickets to each player as a sort of “apology”. With a little bit of saving you don’t need to spend any money at all to get the cool high-price items you have your eye on.

“Pocket Camp has a lot more items (furniture/clothing) than New Horizons does in its current state, as well as having more interactable objects and unique animations for the villagers. It did come as a disappointment that New Horizons took very little, if anything, from Pocket Camp and there is a lot of criticism from fans that the villager activities in New Horizons can be very repetitive and that they don’t really interact with any of the cool things they have built on their islands. While a New Horizons villager may snub the “cafe” you built to go sing on the plaza, Pocket Camp has a plethora of differently themed cafe sets each with their own special animations and even uniforms that the villagers actually use.

“While I think that New Horizons is a fantastic game, and it does say something that I have not played Pocket Camp once since March 20th, I do believe that Pocket Camp gets a bad reputation for its initial lack of content and the inclusion of micro-transactions, as well as it straying quite wildly from the typical format of the Animal Crossing franchise. While any mainline Animal Crossing game has Pocket Camp beat, it was definitely fun, addictive, and was a great alternative to get me through to the release of New Horizons.

“If you need your Animal Crossing fix and can’t get your hands on a switch, Pocket Camp is definitely your man.”

Dylan Walton ​(Secretary): “Animal Crossing: Pocket Camp follows the same trend as most console to mobile franchise games, taking the key formula and adjusting it to make it work. The game is about your villager (player) setting up their own campsite, from buying new furniture to upgrading and customising your own camper van. This is similar to the concepts seen in New Horizons, just on a smaller scale.

“Pocket Camp also deviates from the more casual progression in all other mainline AC games, instead opting for player levelling through completing certain tasks. Speaking of progression, your camper van acts as your house, with you needing to pay off a large loan in order to upgrade multiple times. Meeting villagers is also in the game with the player character finding them around the island, and if you complete certain tasks they will move into your campsite. This is another area that sees deviation from the main titles, with the character becoming closer to the villagers by completing tasks for them, rather than simply checking in with them each day or occasionally buying them gifts. Of course, with it being a mobile game, we see the inclusion of micro-transactions (scary!). This is something not seen in the main line titles, although with pocket camp being free this is something you should be able to look past. These micro-transactions aren’t too intrusive with the player able to buy bells or tickets. Bells are the in game currency that you use to purchase everything in the game, meaning the player can circumvent a core component of the main line games; tickets pushes this further with the player being able to use these to purchase higher end cosmetics and take part in exclusive events.

“Overall, I believe Pocket Camp could satiate the hunger of playing New Horizons, and could potentially be an alternative to New Horizons. Although overall, Pocket Camp is akin to a Pot Noodle. Yes sure, you’re not hungry anymore. But cmon, I would rather be eating a steak.”

Animal Crossing Society Member: “I like it, it’s sweet and wholesome, fun for when you want to switch off for a bit (no pun intended), but it’s very grind-y, has no plot, personalities are flattened, and is a bit… aimless. The events are fun though, and the furniture is absolutely to die for. It’s not really an alternative to NH but if you enjoy a good hour wasted on a mobile game it’s worth playing.

“It makes me so sad that NH doesn’t have half the cool furniture. I neeed the steampunk set.”

Another Animal Crossing Society Member: “I only played Pocket Camp for a couple of days, so take what I say with a pinch of salt, but I feel like the game is missing the Animal Crossing charm. Since the series is grounded in doing daily tasks, you have to make those tasks feel good, something the main series games excels at – talking to villagers is fun because they have personality, obtaining bugs, fish and fossils fills the museum with life, decorating your house lets you create your ideal living space when, in real life, you’re a lot more limited.

“The world of Animal Crossing is cute and wholesome so you can escape this world for a while. Pocket Camp lacks the aesthetic which makes that escapism possible, since your progress isn’t grounded in the little world your character inhabits, beyond how you customise your campsite and caravan. The grind wasn’t worth the reward for me, hence why I lost interest, and given the switch is portable, I don’t have to settle for less.”

The only previous Animal Crossing game I have ever played was Wild World (though I am quite familiar with New Horizons due to the wondrous world of the internet). Pocket Camp is definitely more restrained than many other games in the AC franchise due to it being an app. Much of the content is repetitive and players can lose interest.

In addition to this players can only fish, harvest fruit, catch bugs, and collect shells in certain areas. I admit, this makes the structure of the game slightly rigid and repetitive. Another point is that players are offered to pay a monthly fee of around £3 to have certain perks. However, you can progress through the game without paying at all! Collecting bells, leaf tickets, and material is quite easy so I would say there is no need to splash out. However, even if you do, it is still cheaper than the Switch version.

What kept me hooked on the game are the features aside from the base gameplay. I really appreciate the events that occur and the customisation aspect of the app. The endless furniture options allows the player to truly make their campsite, cabin, and camper van exactly what they want it to be.

Although unlike other games in the Animal Crossing franchise, Pocket Camp is one of the apps I have been hooked on most since I downloaded it a few moths ago. I was not able to buy a Switch and I had slight FOMO over being unable to play New Horizons. Thankfully, Pocket Camp exists! Although more constrained than its Switch counterpart, Pocket Camp still allows the player to experience the Animal Crossing experience — and for much cheaper! You still meet many of the new characters introduced in New Horizons, plus some pretty cool features that other AC games lack. Whether you’re a collector or a customiser, I truly recommend Animal Crossing: Pocket Camp.