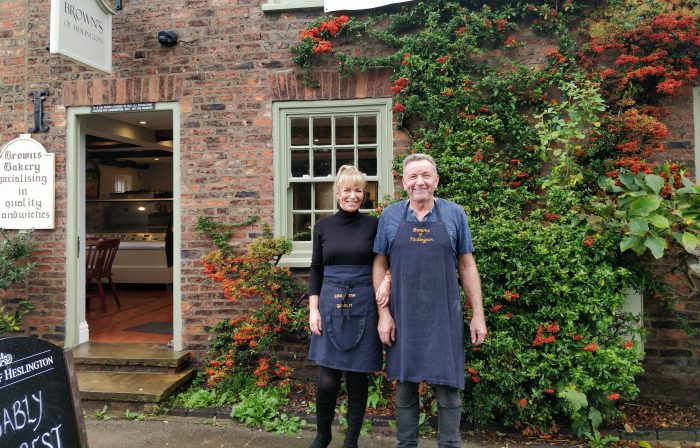 From their favourite sandwiches to plans for the future, meet the couple behind the magic, Mr and Mrs Brown.

During my first few weeks at university, after a disappointing game of football, I was introduced to Browns. It felt as if I was being ushered into a secret society, joining a procession of older students down into Heslington village, past the Charles, and into Browns of Heslington. From that first bite, I became a devotee.

At only £3.50, the sandwiches are incredibly affordable, and so at any given lunchtime I would make the short trip down to Browns and circle around the various options until I picked one out. All other sandwiches faded into the background, and I would let anyone know who hadn’t yet discovered Browns what they were missing out on.

Three years on, and one pandemic later, I got the chance to meet Mr and Mrs Brown. I must admit, I was nervous. They say never meet your heroes, but as soon as I got in the door, Mr and Mrs Brown made me feel extremely at ease, providing me with a cup of tea and a toasted version of one of their classic sandwiches, hunter’s chicken.

I began by asking about the origins of the bakery.

Mr Brown: “We opened in December 1990, so have been operating for thirty one years. Our main thing is sandwiches, it’s our bread and butter.”

We then began to chat about what makes their sandwiches so special.

Mrs Brown: “One of the main advantages of having our own bakery and making our own sandwich fillings is that we can make everything fresh on the morning it’s sold. This gives customers the guarantee that they are buying a sandwich on the same day as it was made “

Mr Brown: “That’s what we pride ourselves on, making them fresh every morning, with our own ingredients. We bake our own bread on the premises, we’re an artisan bakery. All our fillings are made up on site – we don’t buy fillings in – and we cook all our own joints of beef, chicken, and lamb.”

Our conversation then moved on to the pandemic, and the opportunity it has given them to pause and reflect.

Mr Brown: “COVID-19 gave us a chance to reinvent ourselves, like a phoenix rising from the ashes or something like that.”

Mrs Brown: “We were closed for eighteen months during Covid, it gave us a chance to revamp the place.”

This refurbishment has so far resulted more tables and chairs, some redesigns to the interior, and a new coffee machine, but the couple have bigger plans for the future.

Mr Brown: “We do intend to open a coffee shop upstairs. It will have Wi-Fi, and could be a place for people to socialise, work and meet one another.”

Mr and Mrs Brown also emphasised their flexibility in catering for all dietary requirements,

Mr Brown: “Any feedback from students we’re happy to take on, what they want we’ll try and provide.”

Finally I asked Mr and Mrs Brown the most important question of all, their favourite sandwich: