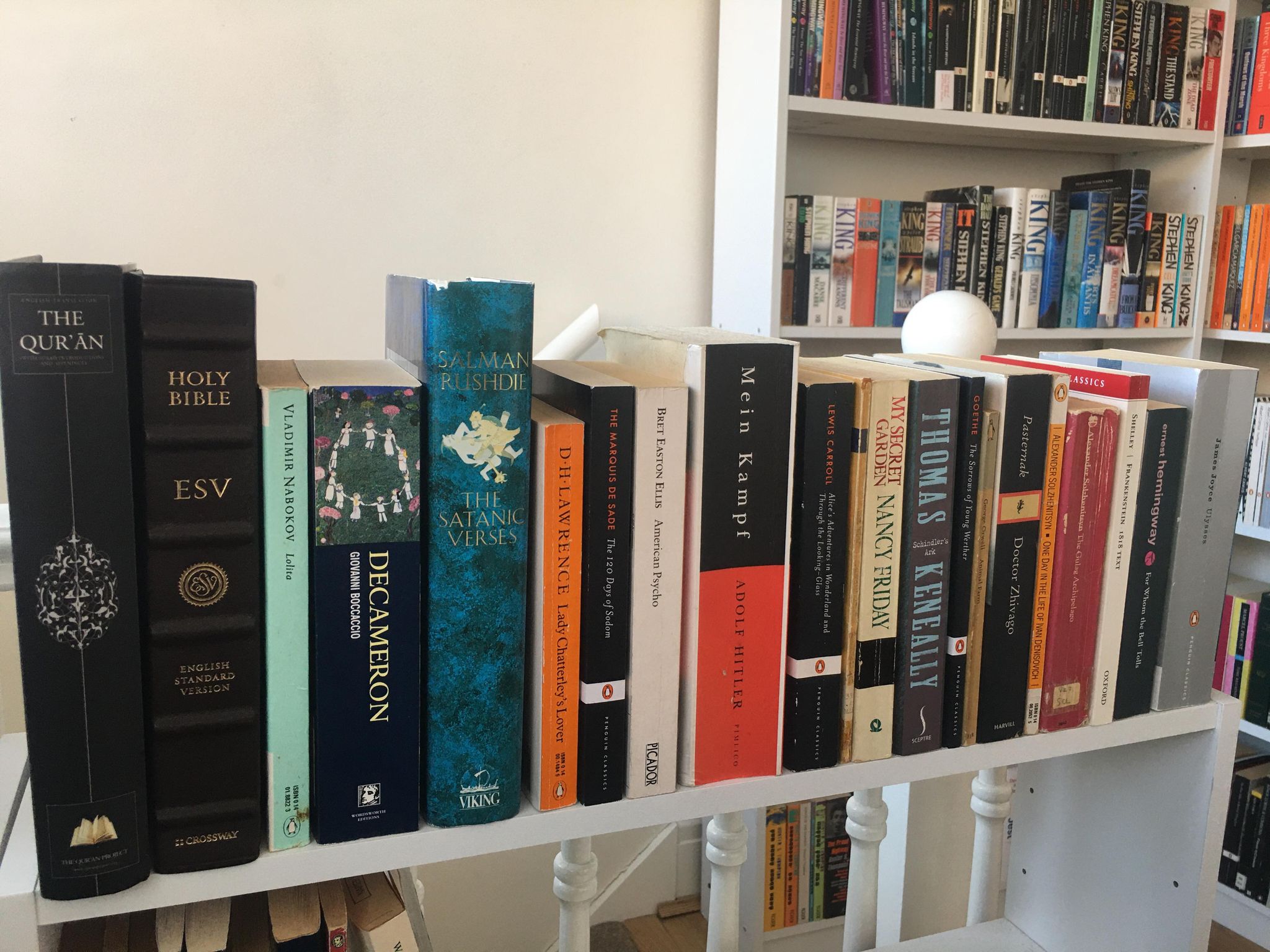 “It was a pleasure to burn.”

From Mein Kompf to the Communist Manifesto, The Bible to the The Quran, and Lolita to 120 Days of Sodom, the banning, censorship, or removal of books from the public consciousness has at one time or another, been utilised in almost every nation. Whilst all countries place some restrictions on what may and may not be published, the factors which constitute a book worthy of censorship are as varied as the titles victim to this form of suppression.

Whilst book banning may evoke images of mass burning, the reality of this phenomena is usually far less vivid- but just as ethically contentious. After all, is it not accurate to state that one man’s expression of dissenting opinions is another’s perception of sedition?

This article shall present both sides of the topic; looking at arguments in favour, and against literary censorship. It is pertinent to note, however, that this is a highly subjective topic, and your personal interpretation of the morality of book banning will likely remain resolute. I hypothesise that, whilst some will ardently support or oppose book banning, the majority will fall within a grey area, supporting it in some circumstances and opposing it in others.

For almost as long as we have been writing, censorship of literature has been a deciding factor in what we can and cannot read. Consequently, a coherent history of book banning spanning thousands of years and addressing all examples of this form of censorship would be unfeasible. Despite this, however, it is crucial to appreciate the longevity of this practice, as to demonstrate how entrenched in literary and legal history these regulations are.

This practice is at least 2000 years old, with the earliest known use of book banning as a form of censorship of ideas emerging from ancient history. Significant examples include the 213 BCE purported burning of books and burying of scholars in Qin dynasty China, the 8 CE forced exile from Rome of Ovid for writing Ars Amatoria, and the 35 CE attempted banning of Homer’s The Odyssey by Roman Emperor Caligula for its expressions of Greek liberation.

Throughout the early modern period, dogmatic religious affiliation became the most significant motivation behind the banning and destruction of books. Savonarola’s Bonfire of the Vanities (1497), the burning of William Tyndale’s English translation of the New Testament (1524), and the seminal Index Librorum Prohibitorum, censored books considered heretical to the church; authors such as Boccaccio, Milton, Defoe, Dumas, Stendhal, Balzac, and a plethora of philosophers all had their works suppressed, and commonly burnt.

A trend began to emerge in 19th century, with books regularly being banned under the ambiguous ambit of obscenity; notable contemporary examples of this include the works of the Marquis de Sade and George Eliot. However, this rationale is still commonly cited and has been responsible for the societal expurgation of works by Nabokov, Balzac, and D. H. Lawrence.

Censorship of, and challenges against books, in the 20th and 21st century are just as commonplace; notable examples including the 1933 German Student Union’s burning of 25,000 unpatriotic books in Nazi Germany, the banning of The Satanic Verses and consequent Fatwa called against its author (Salman Rushdie), and the 2015 Charlie Hebdo shooting.

A theme, perhaps noticed in the previous examples, is them having taken place in nations, or under regimes with dogmatic levels of religious devotion, or dystopian-esque dictatorships with little freedom of press. Despite this, however, even in modern nations with laws dedicated to protecting freedom of speech, press, expression, and thoughts, books are, with some regularity banned, censored, or challenged.

As demonstrated by the briefly discussed history of book censorship, the motivation behind the banning of texts is incredibly varied. To consider the practices historical and contemporary ethical implications, it is crucial to look at some of the most commonly given rationales behind proscription.

According to the American Library Association (ALA), the top three reasons cited for books challenges in the United States are;

Additional commonly cited grounds, not overtly referred to by the ALA, include defamation, religious affiliation, racial issues, political issues, LGBTQ+ content, violence, suicide, nudity, and use of illicit substances.

An issue, likely evident from the listed rationales behind book censorship, is their intrinsic subjectivity. A clear example may be, using the name of a divine supreme deity in a less than respectful way. To some, this would not raise an eyelid as no offence has been received; to others, this would be considered blasphemous and highly offensive. To the first party, this is an exhibition of sacrosanct rights; to the second, this is a deeply disrespectful slight against their belief structure, and potentially from their perspective, deserving of censorship.

Whilst that demonstration uses the emotive topic of religion as an example, the same divide between not offended and offended exists with all cited censorship motivations. Herein we find our ultimate dilemma, our individual morality, ethics, and beliefs are unique; what offends me, may not offend you, and vice versa.

Despite the immense variety in the rationales behind book banning, there are many fewer commonly used arguments supporting or opposing the practice.

Arguments in favour cite the protection of society; with commonly utilised vernacular such as, political/cultural stability, protection from obscenity/offense, and the prevention of ideologies that encourage, foster, or teach dangerous, violent, or illegal behaviours.

Arguments against, focus on the infringement of rights and ideas, the bias/subjectivity of the motivations behind censorship, the validity of the authority of those with the power to prohibit certain texts, and the concept that censorship marginalises alternative perspectives and promotes ignorance.

Whilst I will leave my personal interpretation of the debate somewhat ambiguous, there are two recent examples which come to my mind when considering the contemporary ethical implications of the censorship of books; whilst they are polarizing in terms of the motivation behind their prohibition, the very nature of their censorship, and the real world implications are in my opinion, troubling.

Ben John (21) was arrested in 2020 for offences under the Terrorism Act, including possessing documents on combat, homemade weapons, and explosives; specifically, the controversial, but legal 1971 text, The Anarchist Cookbook. Significantly, he was described by Lincolnshire Police as a “white supremacist with a neo-Nazi ideology”.

What I find troubling about this case, is not Ben John’s conviction on the grounds of political ideologies, but the crown’s reliance on his possession of controversial literature in obtaining an arrest. Whilst his supposed ideologies are odious, reprehensible, and potentially dangerous, conviction on the grounds of possessing a legally obtainable but equivocally unpleasant book, surely sets a dangerous precedent.

The Anarchist Cookbook is undoubtedly, a potentially dangerous book; even the author William Powell regretted its publication, spending a majority of his life attempting to have it pulled from shelves, and atoning for having written it. Despite this, it is the morality of its censorship, not existence in question. It is only overtly banned in Australia, but it has in the UK obtained a place in the grey area of literary censorship, as an example of so-called incriminating literature. There is no codified list of these texts. Incriminating literature can, therefore, be perceived as “covert book banning”; whilst these texts are legal to own, they are difficult to obtain, and possession, as demonstrated by Ben John, can result in, or contribute to prosecution.

Secondly, This Book Is Gay (Book Banning in Texas)

As noted in a 2021 Guardian article by Juno Dawson (also the author of This Book Is Gay), Texas lawmaker Matt Krause has put together a list of 850 books he wishes to be removed from Texas school libraries. A particularly troubling aspect of this list, is its content; as noted in the article, “On Krause’s 850-strong list of titles he wants banned from Texas libraries, 62% concern LGBTQ+ issues.”

What I find most odious about this list, is its obvious attempt to prohibit books contrary to Krause’s staunch conservative Christian and Republican ideals; the censorship of LGBTQ+ literature perpetuates ignorance and homophobia, and marginalises the literary contributions of the LGBTQ+ community. Moreover, books like This Book Is Gay are designed to help people appreciate and understand what it is like to question ones sexuality and gender identity, as well as to invoke a myriad of discussions on pertinent topics.

More so troubling yet, this article, and the utilisation of This Book Is Gay as a demonstration, is only one of the countless examples of LGBTQ+ focused books having been challenged and/or banned. It is an almost unbelievably common occurrence worldwide.