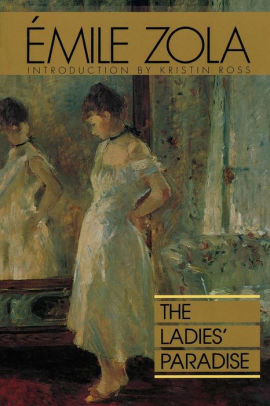 We are excited to announce that York Vision’s Books section is launching a series of articles on French literature. In this, the first article of the series, I’ll be looking at Emile Zola’s The Ladies Paradise.

However, the aim of this series is not to give you a complete panorama of French literature since 1539 (the date of the institution of French as the official language of the country). Rather, this is an easy place to start if you’ve ever wanted to explore French literature. These suggestions are not dictated by some semi-official hierarchy of the best French classics of all time: they are hand picked, among the classics, as the books I enjoyed the most. Those I couldn’t stop thinking about even when I had to get on with my day. Those that really moved me. They are relatively recent novels, and are easy to read in English.

Across this series we will explore the Paris of the 1860s, set by Emile Zola and Madame Bovary’s Normandie. We will go to the mountains near Aix-en-Provence, childhood kingdom of Marcel Pagnol. We will fly planes with Romain Gary and go to Indochina with Marguerite Duras, meeting characters along the way that are terribly romantic, and ravaged with passions and aspirations.

In this first episode I am taking you to the Paris of fashion, of silk and linen and velvet, of the grand boutiques in the 1860s. Let me introduce you to Emile Zola’s novel, The Ladies’ Paradise (1883).

Before we talk about the book, a few words on the historical context are essential. Napoleon III is emperor. Paris is undergoing a massive mutation. It’s the era of the destruction of the Medieval Paris in order to solve problems of hygiene, epidemics, and security. Napoleon asked Haussmann to re-design the capital. He destroyed Paris’ Medieval, insalubrious habitations and cut massive boulevards to link one railway station to another, let the air and light in, and get rid of the germs. Haussmann is the inventor of Parisian apartments as you see them today.

In this time of important innovation and progress, the commercial world also underwent transformations. The second half of the 19th century saw the apparition of the gigantic department stores in Paris, just like Harrods in London, which had the side effect of destroying many small shops.

In writing The Ladies’ Paradise, Zola’s aim was precisely to dissect this mutation of the commercial world. After weeks of exploration of Parisian department stores, Zola filled his ‘investigation notebooks’ with thousands of facts and observations. From the number of employees to the profit made by the shop and the menus of the cantine, Zola’s was the work of a surgeon, examining the insides of the phenomenon he wanted to analyse in his novel. Let me introduce you then to The Ladies’ Paradise.

Photo of a page of Zola’s ‘investigation notebooks’

After losing her parents, Denise Baudu arrives in Paris with her two younger brothers to work for her uncle in the little shop he owns. However, when she arrives, she is bewildered by an immense building: the department store The Ladies’ Paradise. The bright colours of its windows, the bustle of the hundreds of clients in the shop, and the luxury of all the silks dazzle poor Denise. She stands on the pavement, in a simple black woollen dress, staring at this vibrant temple of fashion.

When she and her brothers finally manage to get their eyes off The Ladies’ Paradise, Denise finds her uncle’s shop, looking awfully small, obscure, and unappealing in comparison. She finds her uncle in despair, as he is losing all his clients to ‘The Paradise’; the department store is literally sucking all the life from him. Denise is forced to look elsewhere for a job, and the only place recruiting is The Ladies’ Paradise. And so her adventures as a seamstress in ‘Paradise’ begin.

However, the first days are very rough for Denise. All the sellers make fun of her uncombed hair and her worn out shoes. Her feet are sore from standing for such long hours, and she always needs more money to look after her brothers. But she doesn’t give up. Soon, she meets the owner of the shop, Mr Octave Mouret. He is a man from the South of France who has conquered Paris through its women. Inventor of the modern department store, commercial genius, and ravishing seducer, he is a vanguard artist at heart. Denise is intimidated by him. Octave finds himself attached to her. He does the only thing he really knows to: seduce her. But Denise is too busy trying to get through her long days and earn respect in her department to listen to those kinds of feelings.

The Ladies’ Paradise is the moving coming-of-age story of Denise. Her softness and perseverance enable her to transform herself from a countryside girl completely lost on the boulevards, to a respected and influential Parisian woman. This novel reads like a kind of fairytale: Denise, the virtuous princess, and Octave, the charming prince, progress through many obstacles towards a happy ending. Moreover, Zola excels in parading us through the department store, talking us through the different sections, describing his well-known clients and their behaviour just as Octave Mouret walks his friends through the different regions of his empire.

The Ladies’ Paradise is so much at once: a socio-historical documentary, a fairytale, a satire and a praise of women. It is charming and full of terrific plot twists: I promise you’ll like it! If you don’t feel like reading the book, the BBC has adapted Zola’s novel into a TV series (16 episodes) in 2012. I haven’t seen it, but it might be worth a try!