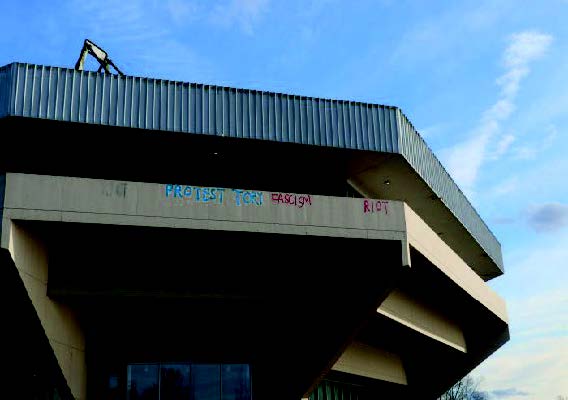 Central Hall has been scrawled with graffiti three times in less than an academic year.

The first time it said “Riot”. Then “Protest Tory Fascism… Riot”. Now, finally: “UoY Protects Rapists” – a
statement acidically loaded as they continue to refuse to release information regarding the references of Joseph McKoewn by University lecturers.

All on exactly the same spot and using the same spray paint – it doesn’t take a genius to realise that there’s a trend.

And it’s not as if this is students harmlessly blowing off steam, when the Uni sprint across and clumsily cover it with what appears to be an oversized dustsheet; these are violent accusations and rallying calls – that are also costing the Uni vast sums of money. In the first term of this year alone York spent four times as much on graffiti removal than the entirety of last year – up to a blowout £871.34, with several more removed since.

While many might see this as the University allowing a mouthpiece for students who are, rightfully over the last year, angry with the hand we’ve been dealt, but their comment to Vision after they were accused of protecting rapists says otherwise:

“Graffiti is a criminal act and it is not acceptable to deface any building. It will not be tolerated and we will take action where we can.”

That seems fairly cut and dry – particularly after “CJ is a Conman” was daubed across the Grade II listed Heslington Hall. So why has it been able to continue?

The answer appears to be indicative of a wider trend: the neglect of security cameras on campus. In 2019, Nouse reported that 543 – over a fifth – of CCTV cameras were not functional on campus due to an incompatibility with the updated University security systems.

Indeed, they later reported that the number of security cameras had decreased by 155 over a year. The University later commented that work on improving security through CCTV coverage had been “delayed by the pandemic”.

It’s not as if their campaign is particularly sophisticated. RevSoc, who have claimed responsibility, signed off their last comment to Vision: “Merry fucking Christmas and a Revolutionary New Year”. While done at night, their graffiti appears on prominent, and repeated landmarks, and in full view of anyone happening to walk past.

It’s nonsensical, therefore, that there is no CCTV on this spot – not only would they have caught the offenders, but probably have saved money on the ballooning cost of removing it.

So, if even accusations of protecting rapists and indictments to “riot” do not spur York into limited CCTV coverage on a listed building, what does this say of their wider attitude towards security on campus?

This need dramatically raised its head in November, as students in Halifax accommodation found themselves under siege, with a dramatic video showing residents fighting to keep out a group attempting to kick down their doors. The University confirmed that “security teams attended the scene and provided support and advice to students after liaising with North Yorkshire Police”, pledging to: “increase patrols in the area to deter any further incidents and to give our students additional reassurance”.

With threats like this present at York, the need for CCTV is essential, both as reassurance and to support students under threat. The fact that graffiti has continued to such an extent across campus shows that not enough is being done.

While the relative impact of the graffiti may be minimal, it highlights faults at the heart of the University’s security system. That students can stroll across campus with cans of spray paint and say what they like, irrespective of truth, displays a massive flaw in the system – York needs to increase CCTV presence, and quickly.