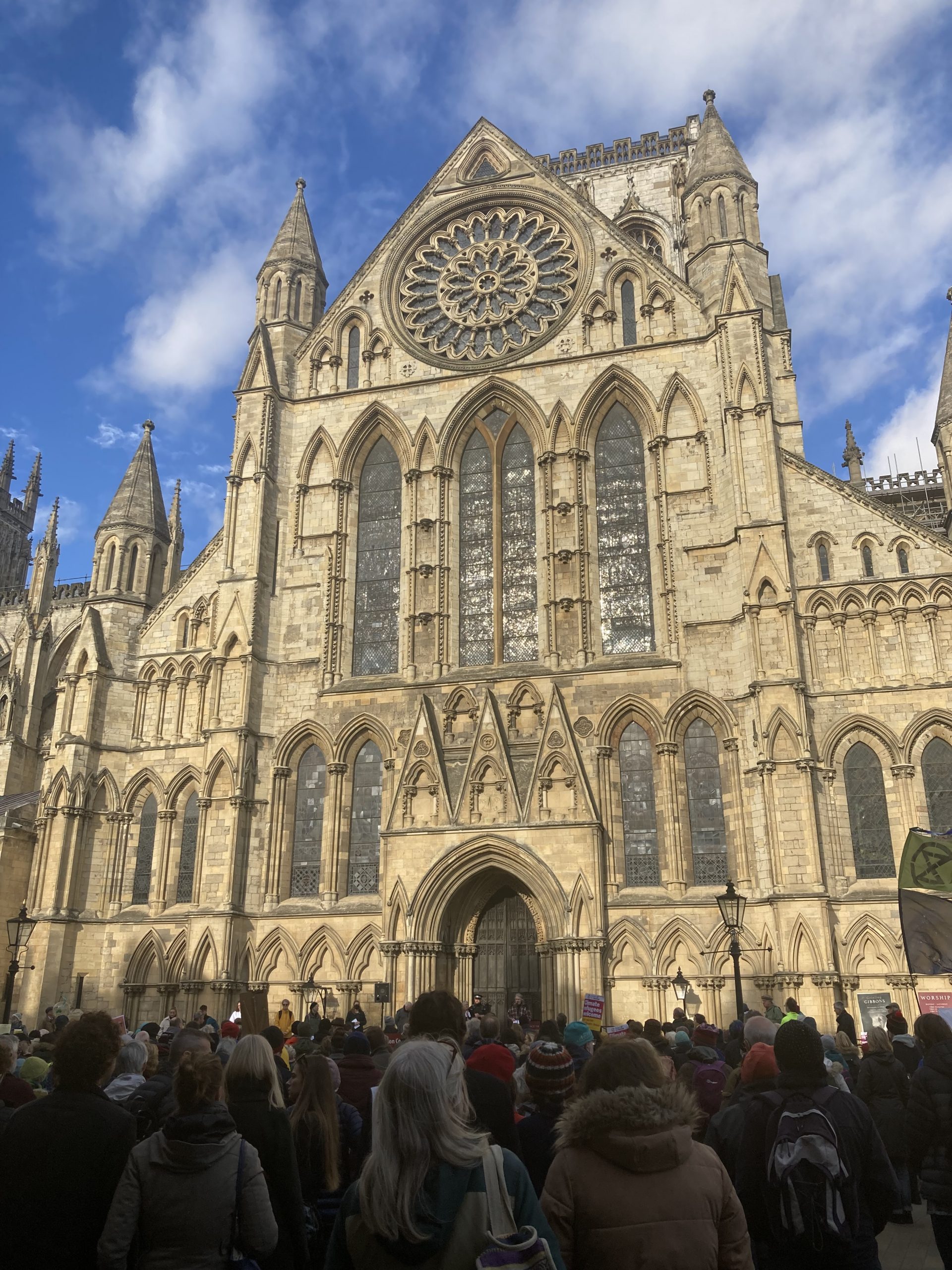 This Saturday York joined 300+ cities from across the globe that were marching for climate action and systemic change. The COP26 Coalition, who organised the global event, described the intersectional moment as “bringing together movements from across the world to build power for system change”, and York certainly answered that call.

Meeting in the shadow of the York Minster Cathedral at 12pm, the 500-strong group included students, families, activists, and political and religious groups of all backgrounds. Beginning with a series of speeches and songs in an open-mic session, the crowd energised the square with cheering, drumming, and posters reading messages such as “COP26 NOT COPOUT”, “System change not climate change”, and “I’m sure the dinosaurs thought they had time too”.

Organiser Conie Cooley described the turnout, “Everyone coming out with their banners was really impressive. We had everyone. That’s the inspiration. We really need everyone to work together and fight for a better future.”

“This week there have been amazing turnouts in Glasgow. It shows people’s power.”

She also highlighted the importance of the widespread, locally organised events, “Not all of us can get to Glasgow. But everyone should have a chance to come out and say ‘No, COP has not fulfilled us.’”

Julie Morgan from the York Hub of the COP26 Coalition described the grassroots moment’s goal of demanding radical action “in contrast to the inaction of UN climate talk”: “There are thousands out on the streets today because we realise that our world leaders and their negotiators promise too little and deliver even less.”

Another activist from the Greens Party similarly highlighted the inaction of world leaders: “We have to hope, somehow, that this last COP is going to make some real progress, but we also know the entrenched system that puts profit before people and the planet will keep on trying to bring that greenwash in.”

Other demonstrators from various groups gave rousing speeches which prompted cheers and excitement from the gathered crowd.

One speaker used her time to highlight the urgency of the moment, “Even at a temperature increase of 1.9 degrees we will see nations burning, we will see famines, we will see floods. We will see ice caps melting.

Another speaker from the York Minster advocated for the Christian ideal of ‘Love Your Neighbour’. She spoke of the devastating effects climate change is having on countries around the globe and the need for the global north to take action: “We’re all in the same storm but we’re all in different boats. We’re in one boat here in the north, we can also help those suffering in other boats across our world.”

After speeches, the crowd joined together to sing songs such as ‘We’ll be Getting Power from Sunshine’ (sung to the tune of ‘She’ll be Coming Round the Mountain’) and the Song for Climate (first sung at COP21).

The lyrics echoed throughout the cathedral square in a uniquely still moment of reflection, peace, and unity.

We’ve got to solve it, get involved,

The demonstrators then marched through the city centre, with the crowd stretching from the top of Parliament Street near St Helen’s Square, right down to the corner of High Ousegate. A busy Saturday morning, the streets were full of visitors and shoppers, all pausing to watch the procession pass by. Whilst some watchers shook heads or complained of the disruption, most of York reacted positively, with some even suggesting that they would join the march.

One mother was impressed by the “everyday people out on the street” and could be seen explaining the event to her 4 year old daughter, who (encouraged by another young protester’s poster) proclaimed: “The Lorax speaks for the trees.”

Kate Cottill was particularly amazed, “I couldn’t agree more. I’m going to educate my children to stand against corruption and stand against capitalism. And I absolutely love seeing peaceful protests like this. This needs to be happening in every town!” Her brother Chris corroborated that “It’s what we need”, and her son Sebastian thought the event was very cool. “It’s interesting,” he contemplated.

The power of youth was certainly on display with many school children using their weekend to join the march for climate justice. One young girl presented a poem asking “What did you do?”:

“Did you listen to the science, take omissions way down low, did you slow the rising sea, were we allowed to grow?”

Katy Cochrane brought her kids in order to teach them that, “It’s important. They can make a difference and get involved in change.” The children were hugely excited to be involved, showing off their home-made signs to anyone who would look.

Throughout the powerful moment of action and hope, the diversity of the passionate protesters remained a sight to behold as York civilians of all backgrounds cheered, marched, and sang together, united by the common catastrophe of climate change.

And they assetted that the effort doesn’t stop here, with one protester encouraging, “We will make some noise and we will protest and we will disturb and we will make the changes we know we need to make. Do everything in your power to do. And when we join together, who knows what can happen.”