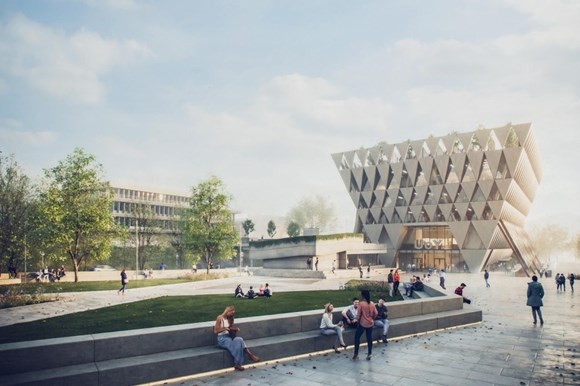 The University plans to build the £35 million student centre in September 2023 and for some facilities to be usable by the following academic year.

ADP and O’Donnell + Tuomey have been chosen as the architects for the student centre, with some students and staff involved in the design process. As part of the initial round of stakeholder consultations, student union representatives were consulted and views sought from clubs and societies, of which will continue via the student centre’s feedback portal.

John Tuomey of O’Donnell + Tuomey said that the student centre will be a flexible “singular structure”, with “interconnecting multifunctional spaces, a south-facing winter garden and a walled orchard garden on the roof”.

He describes the design as modern, yet also environmentally responsible. The building will be constructed of natural materials and renewable sources, featuring solar panels, roof lights, and controlled glazing. In addition, there will be digital teaching walls with augmented reality capabilities.

The University has stated that the architects have also designed other student centres in various universities across the United Kingdom and The Republic of Ireland, as well as non-university buildings around the globe, including in China and India.

The President of the University’s Graduate Students Association mentioned how the GSA has been “actively involved since the start of the project”.

The Higher Education Director, Jon Roylance, states that the centre and surrounding landscape will be “a welcoming and supportive place for students, staff and visitors, reflecting the University’s values”

According to Charlie Jeffery, the student centre will be situated on Campus West, close to the library, and described as a “dedicated space for students to relax on campus”.

Our current YUSU President has also described the potential of the student venture to “offer us many more opportunities to enhance students’ time on campus”.

However, many student responses have condemned the plans.

In the Facebook post, she states that she, student groups leaders and YUSU colleagues have discussed the need for a specific space for groups in the new student centre. She adds that “creating more office, dining and ‘flexible’ space feels incredibly corporate and out of touch with what students actually want”. She adds “I’m looking forward to hearing more about how the £60m investment is going to be of benefit to our societies, media groups and sports teams.”

Students have voiced their anger on the University of York’s Instagram post. Comments include how the university has to listen to what students want. In addition, the University has been criticised for the lack of investment in other aspects of student life, such as mental health support, the leaking roofs in Derwent and free laundry.

“The student centre announcement has been one of our most impactful of the year so far, reaching more than 100,000 people in just two days.

“To date, more than 14,000 people have engaged with the social media posts – a huge number – which suggests people are really keen to find out more.

“We’ve sought lots of views so far, from Student Union representatives, and clubs and societies, and there are still plenty of opportunities to get involved – there is still much to be decided.”

The University has provided a link where you can give your feedback on the plans.