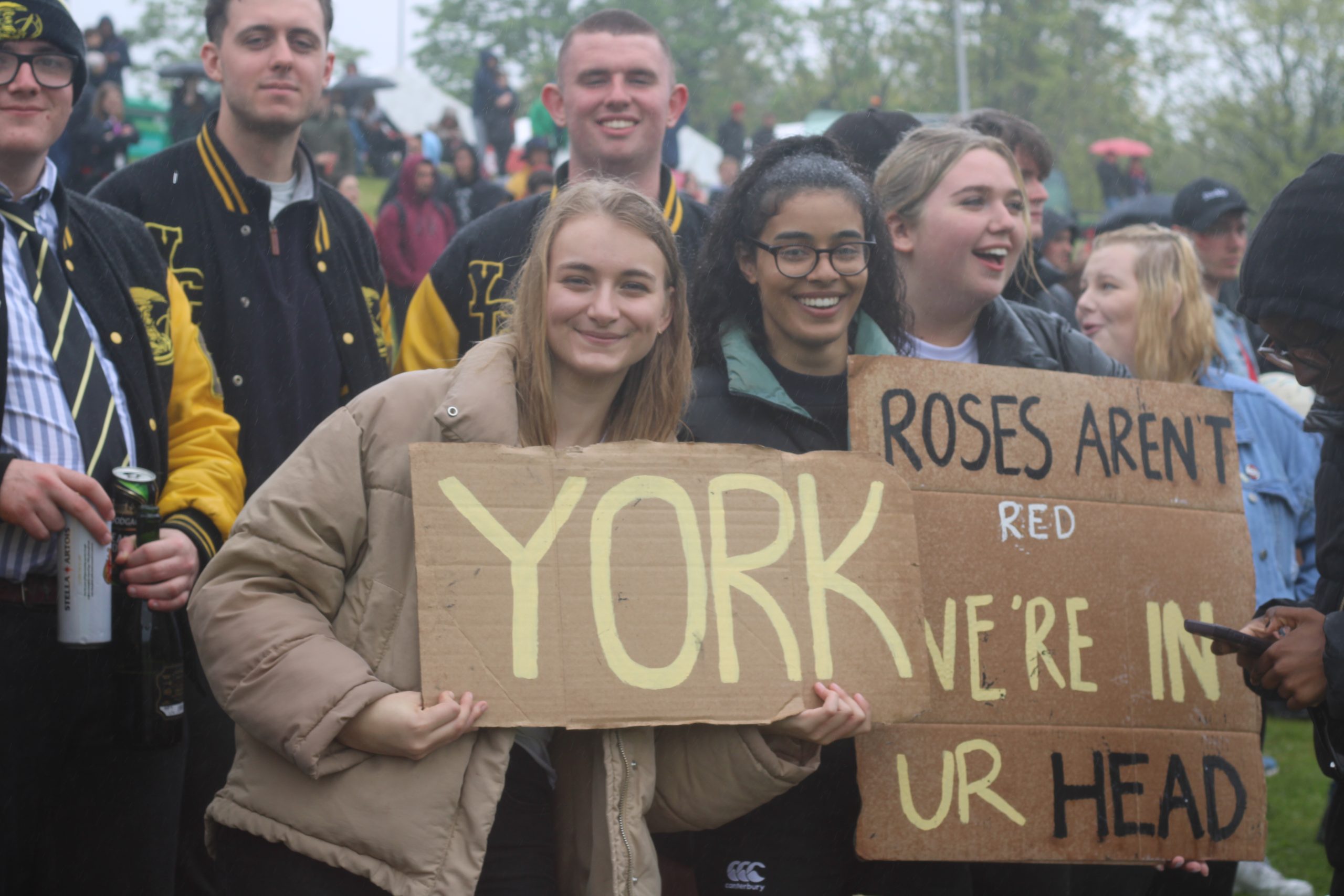 With a huge York student turnout making their way to Lancaster this year for the first in-person Lancaster-hosted Roses in four years, Vision interviewed York supporters to get to the bottom of the appeal of Roses.

The first sport we attended on Friday, the York supporters at Handball passionately demonstrated both their love for the York team and the centuries-long rivalry between the two universities. Stating that “we love supporting York” and, somewhat sarcastically, “we’re here to hurl abuse at Lancaster”, York Handball supporters demonstrated a passionate, unmatched support for their beloved team. Handball was packed with vocal supporters, particularly those from other teams. Both male and female handball teams took time to support each other while they played. They shouted chants until they lost their voices, and somebody even had a trumpet!

Similarly, when interviewing the Vanbrugh netball team, a similar love for the representing team and the sport in general became apparent. “We’re here to support Vanbrugh Netball because we love our sport and our teammates” was the inspiration for many York netball supporters. However, York supporters also demonstrated another key reason for spending money on transportation, accommodation and making the early trek to Lancaster: they had nothing else on. Proudly stating that “we had no lectures on”, the event-free week of many York supporters made me recollect on the workshops I was missing whilst in Lancaster.

At the pivotal opening ceremony of Women’s Netball 1sts on Friday evening, a group of York supporters highlighted the support they had for their flatmates. Another supporter emphasised their positive memories of past Roses games, citing that they attended four years ago and had good memories of the weekend-long event. Another supporter claimed that the atmosphere alone was a reason to attend!

Following a sharp turn of the weather, one group of York students stated that they decided to watch Men’s Basketball because it was raining, and they didn’t fancy watching football. Other spectators at Basketball had clearly come prepared, holding up signs supporting their teammates. We were all very tightly squeezed together at the event due to a huge turnout. There were parents of York team members behind us, showing their support for the entire team.

During the dance competition, the whole cheer squad came to support the York team, showing intersport solidarity. The two sports groups got on the bus together and decided to support each other. At the cheerleading competition, bystanders said that they attended because of the “cute vibes”, good atmosphere, and as “something a bit different”.

At Men’s Hockey, there were several four-legged supporters. One of the dogs that made it to the event was very vocal, barking each time the crowd cheered. Others sat very patiently, watching their humans attentively.

While watching the Women’s Rugby event, we found one individual who had travelled the 280-mile journey from Essex to Lancaster. They stated that the match is really special for them as it is not only the first away Roses event in three years because of Covid-19, but also the final match for third year students leaving the University.

At Debate, one York student attended as a way to spend time with a friend from home. Another student travelled from York to Lancaster to spend time with their friend at the University and visited Roses in the meantime. Despite being on competing teams, the two of them were able to enjoy the event together.

Throughout the weekend, we have found that dedicated fans will travel any distance to show support for their team. Whatever the outcome of the event, York supporters kept morale high and proved that Roses will always be white in spirit!