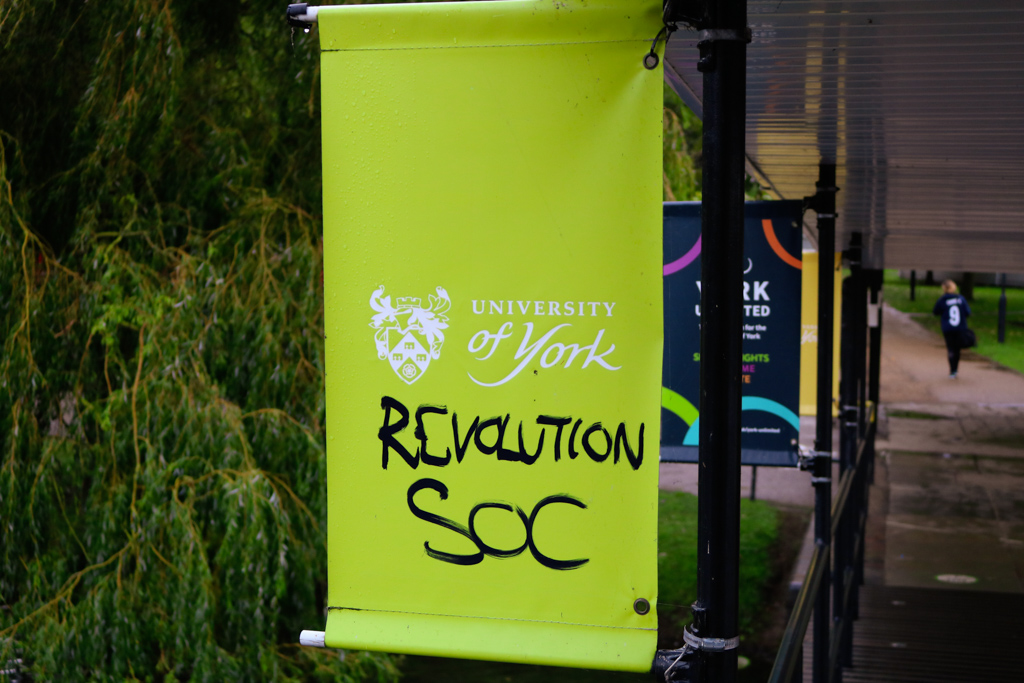 Large messages calling for “revolution” and a rent strike were sprayed across West Campus in the middle of last night.

Central Hall and areas of Vanbrugh greeted students with signs like: “fascists not welcome” and “Rent Strike Revolution Organise Riot” this morning, but the campaign didn’t stop there.

After the news that Turning Point York were ratified by YUSU, despite 3 previous rejections and huge student opposition, several instances of the slogan “Fuck Turning Point Sack Brian Terry” and “#SackWally” have appeared as well.

Terry, the YUSU Activities Officer spoke in support of ratifying a Turning Point society both in the Activities debate, his URY interview during the election campaign, and has been involved in the process as a Trustee, and was also a member of the Societies Committee previously responsible for not ratifying the society.

Terry has stressed that no one individual is responsible for ratifying a society citing the due diligence, debate, and consultation involved.

In a statement passed to Vision Terry outlines that “the ratification process for TPUK has involved the 2018/19 and 2019/20 Societies Committees. It was referred to the Board of Trustees in January 2020 where a final decision was made, as a collective, over the summer of this year.

In order to communicate the Trustee Board decision to date YUSU have;

For further information, please contact the Chair of the Board of Trustees, Patrick O’Donnell.
If any individual or group would like to discuss the process to date, I am happy to look into arranging a meeting with appropriate staff members.”

University maintenance teams have attempted to remove the graffiti, but so far have only been successful in making the messages clearer.

A representative from a group calling themselves Revolution Society, who wishes to remain anonymous, has stated that they believe Turning Point UK are an “extremist organisation that are attempting to normalise fascism on our campus” and “will not stand by whilst the far-right are allowed to organise with the blessing of YUSU”.

The group aren’t a YUSU ratified society and have only just set up social media accounts at the time of writing, but describe themselves as “a new underground society promoting Non Violent Direct Action, Civil Disobedience and Revolutionary politics”, suggesting more action is yet to come.

As some slogans specifically allude to, the groups is “demanding Brian Terry step down”, which is the first time a properly coordinated call for removing a Sabb has been made since a Vote of No Confidence was submitted about former YUSU President Alex Urqhart in 2018.

When asked if it was justified to commit criminal damage, RevSoc told Vision that “YUSU chose to ignore the petition signed by hundreds of students against the ratification, and so we are forced to escalate” and that they “will be held accountable for causing criminal damage when our government is too”.

A member of the team cleaning up graffiti have told Vision that at least one bench will need to be taken apart to be sanded clean, although it appears most targets were not benches, and some signs will be removed easily.