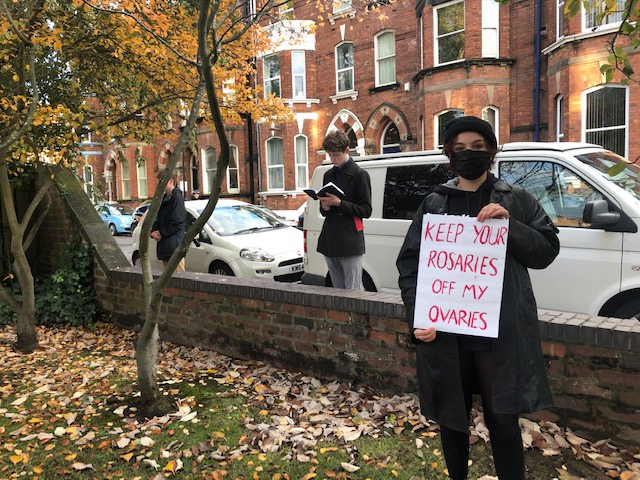 Various people were witnessed protesting outside of Unity Health, Wenlock Terrace, today, while holding religious iconography and chanting in prayer.

These individuals, all of whom belong to St. Wilfred’s Church, were seen praying and holding rosaries outside of the health centre, in order to “pray for the souls of the dead”.

This sparked locals to come out in defiance of the protestors’ actions, calling them “intimidation tactics”.

An NHS worker, who wishes to remain anonymous, and who identifies as a Christian, told York Vision that: “this is not Christianity – it is bullying and intimidation, and a direct attack on the rights of pregnant people”

“As a local resident, I want to make it absolutely clear that this is not the opinion of York.”

“We support the right for anybody to seek abortion care… and they should do that without judgement, fear and intimidation, which is what is occurring here”.

According to residents, the protestors usually amount to a group of up to five people, who hold religious icons, while they chant and sing in prayer.

The NHS worker continued: “they should be willing to engage in conversation, and they’re not willing to do so, so this is a project of hate”.

Laura Wilson-Greene, a former University of York English student, 22, stated: “while they maintain they’re not doing anything illegal, which they’re not, their presence is intimidating”.

“It is important to have a counter presence”.

At one point, a discussion did break out between the two sides, with one of the protestors saying, “we are praying for the souls of the dead, so no other people may meet the same fate”.

At the start of the conversation, the same protestor maintained that “they are not here to judge”, but later on made the firm statement of “judge rightly”.

Residents continued to join, with one local shouting from a distance, “we don’t want you here”.

Father Richard Duffield, who was not present at the time but is the priest at St. Wilfred’s, said: “the Church has not asked them to do this… they are doing it of their own volition”.

He continues: “my understanding is that this is not a protest of any kind but is two people praying quietly. As such it ought not to be very noticeable to either patients or residents”.