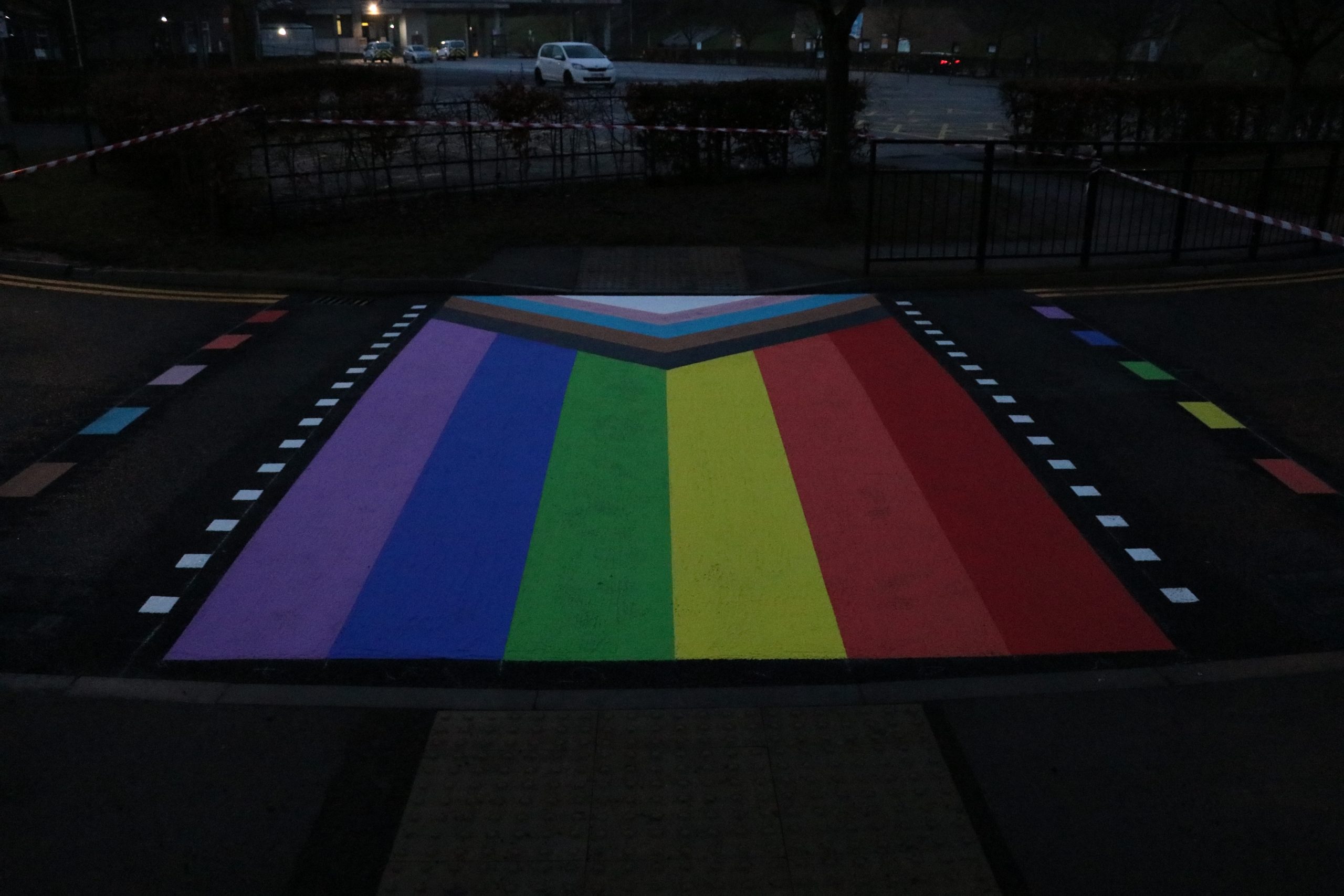 The University has recently unveiled a new rainbow zebra crossing. The crossing depicts the Progress Pride Flag, which includes the classic rainbow flag that so many of us are familiar with, with an additional triangle that has black and brown stripes, along with the colours of the Trans flag represented.

By doing this, the university is showing its commitment to students in the LGBTQIA+ community and also its efforts to increase diversity and visibility of different groups on campus. While the rainbow crossing won’t magically erase homophobia on campus, it will help with visibility of the community.

When I first came to university I wasn’t fully out. I was out to my brother and a few close friends, and that was it. Walking into my flat on the first day of freshers I was nervous – what if my flat didn’t accept me? What if they told me that being bisexual wasn’t valid, or that it was just a phase I was going through to seem cool? Or worse, what if they were threatening towards me?

These are all valid concerns that members of the LGBTQIA+ community have whenever they enter a new situation, especially when you’re going to be living with new people, and feel like you’re walking into the relative unknown.

This is a super daunting prospect, and although you tend to think of universities as more open, accepting places, there are bound to be people that don’t agree.

However, if when I was looking round various universities to see where I wanted to study, I had seen the flag crossing, I would have known immediately that this university was a more accepting place. By having the flag there, it tells students that if they are experiencing difficulties around their flatmates being homophobic, they can get help.

If they’re struggling with their identity and need someone to talk to, there are support systems in place to enable them to feel safe. The combined efforts of the students and staff of the LGBTI+ Matters Network, and other members of staff helped it to happen.

I was lucky. No-one in my flat batted an eyelid when I told them, in fact I found out a couple of my flatmates were part of the community too, and if I’m being honest nobody really cared that much one way or another. As long as I didn’t leave too many dirty dishes on the side or steal anyone’s milk, it was chill.

I’m aware that in this respect I was lucky, there was PLENTY of flat drama back in first year (does anyone have a drama free time though, really?) but none of it was to do with my sexuality or identity. However, there are students who aren’t so lucky, and being in a brand-new place away from all your friends and family is daunting enough, let alone with the added stress of having to deal with homophobia.

Having the crossing there as a symbol is powerful. Some people (mostly on twitter) have claimed that the flag is unnecessary, and even patronising. Some people have asked if there is going to be a straight crossing put in.

The thing that a lot of these people don’t understand is that every other crossing on campus is unremarkable, and does not have the Progress Pride Flag on it. There is only one crossing that has the flag, and the flag is not there to say that the LGBTQIA+ community is better than those who are heterosexual. Far from it, it’s just there to recognise that there are members of the community at the university, and the University of York is proud of that fact.

The flag makes the statement, to quote Queer Nation: “We’re here, we’re queer. Get used to it”.