Thoughts of a gap-year girl at uni

So, I’m back from my gap-yah, and suddenly all this studenting feels a bit… foreign?

Now, I must admit that much like the character Matt Lacey shared with YouTube in 2010, I mostly travelled; so I can’t really speak too much for those of you who did another weird and wonderful thing. What I can do, though, is speak about my own experiences.

When I returned, taking trips to Ikea, buying washing powder, and gathering all my relevant reading material (Hello, OK!; that sort of thing) was a whirlwind away from the teaching, travelling and translating I’d been doing over the past year. I had no real clue if I was now ready for uni, but I imagined that would come in due course.

I’d always had a plan to take a year out, and spend some time volunteering in Africa. After my exams, I carried on working part-time as a waitress before I spontaneously booked a volunteering trip to Zambia (that’s in the middle of Africa for those who don’t know). And so on 15th September, I was on my way to Heathrow to embark on a 12 week teaching stint. Don’t get me wrong, it wasn’t all rose-tinted, but I did have an absolute blast.

I came home for Christmas, applied to uni, and worked for a few shifts, but in my mind the cogs were already turning about how I was going to travel to the next object of my desire… India. I managed to borrow a large rucksack, filled it with 17kg of stuff (a lot less than the near 40kg of rocks and materials I ended up bringing back from Zambia), hitched it on my back, and off I went. The food, the auto rickshaws (tuk tuks), the hustle and bustle, the smells, the food- India was a beautiful feast (thali) for the eyes.

After my two magical adventures (and a couple of random trips to Greece and Hungary), I worked out that I would be needing something self-sustaining to do next. The moolah wasn’t exactly… well there wasn’t exactly a lot of it. The whole ‘American Summer Camp’ idea didn’t appeal to me originally, since my sister had done the same and god forbid I copied her! But, it did seem like a trusty way of making back the money I’d lost, and- fingers crossed– making a small profit. So America it was!

I was placed at a Jewish kids camp in Pennsylvania that emphasised healthy eating and an active lifestyle (not quite in the form of dirty dancing). I was a little apprehensive, but I was excited for what was to come. It’s safe to now say I experienced an amazing, unexpected summer and, combined with my other trips, I had the time of my life. 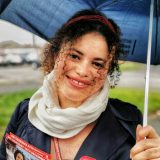