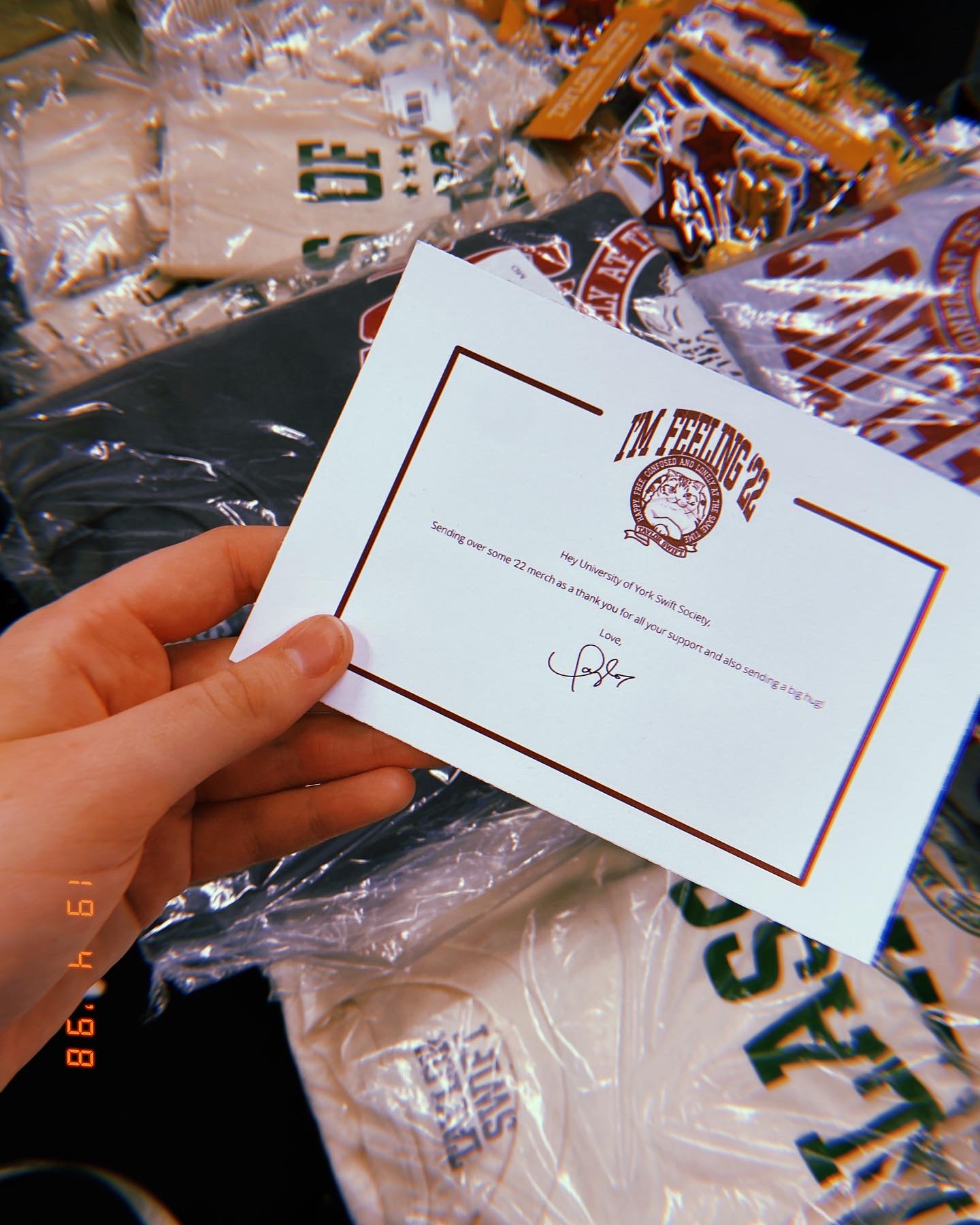 As a huge Swiftie myself, when I heard that York’s Taylor Swift society (SwiftSoc) had received merch from the Taylor Nation themselves, I knew I had to reach out.

To begin, can you outline the history of the University of York’s SwiftSoc and how it all came about?

Hannah (Press & Publicity Officer): I asked Sara-Beth, the founding president of SwiftSoc (in 2015!) and this was her response:

“We all knew we were fans as it came about in conversation and were discussing 1989 coming out! We said about there probably being lots more Swifties at uni so we toyed with the idea about making a proper society for it. We were in Dusk having a cocktail when we did the application! We weren’t expecting it to be ratified but it was! YUSU and Chris Wall, who was the Activities Officer at the time, were so supportive!”.

What was the process of being recognised by Taylor? How did it all happen?

Lauryn (President): I was lying in bed scrolling on my phone when the Instagram DM pinged through from Taylor Nation and I don’t think I’ve ever got out of bed so quickly! I of course immediately told my housemates, rang my boyfriend and texted my extended family before actually reading the message. For those that don’t know, Taylor Nation is Taylor’s management team and they were thanking me for the support and asking how many members we had.

About a month later they messaged for delivery details to send us a ‘gift box’, which felt unreal! We speculated that they may have recognised us from one of our TikToks which went viral, so I would definitely recommend other SwiftSocs to boost their social media presence too. I’m so proud of the committee for putting in the hard work to build the society and I’m so glad that we fulfilled our dream of being recognised by Taylor!

What were your first reactions to being recognised?

Hannah (P&P): Honestly disbelief. Sarah (stand-in Secretary) and I were interviewed by BBC Radio York back in November and they asked us how we’d react if Taylor noticed us and I said “I’d probably cry”… can confirm that was an accurate prediction! When the very first message from Taylor Nation came through I rang my best friend and cried on the phone to her and we spent hours theorising what it could have been about!

Talk about the merchandise you received- were you surprised to receive a gift from Taylor herself?!

Sarah (Swiftie Support/Stand-in Secretary): As mentioned we got quite a cryptic message from Taylor Nation and we, as the committee, spent ages theorising about it. One of our thoughts was merch but we never thought it would happen! Once we found out the parcel was here we were in shock. I don’t think our group chat had ever been more active! Then when we opened it and saw how much we’d been given we were in shock all over again. It’s truly been an experience of a lifetime.

Hannah (P&P): I think for me I was more shocked by the fact she knew we existed than that actual gift itself- I’ll never get over the fact that she might have seen our TikToks! She sent us a selection of Merch from the 2022 Graduation collection (suitably punny)- including clothing, party supplies and graduation cap patches and charms. We’re so excited to share some of it with our members!

To explain to the non-Swifties, why do you love Taylor so much and why does this recognition mean so much to you?

Vicky (Vice President): Taylor provides a song to listen to for basically any emotional situation you are feeling. When I’m feeling in love, I start listening to ‘Style’ and ‘This Love’ from 1989. If I’m sad I’ll listen to ‘I Almost Do’ and ‘The Moment I Knew’ from Red. Of course, if I have an angry theme going I whip out the entire Reputation era. I’ve recently had my 22nd birthday so, for me, Taylor noticing all our hard work and rewarding us this way is one of the best birthday gifts! Especially since Taylor sings the perfect party anthem, ’22’, for everyone turning this age. Being noticed has definitely given us a celebratory feeling and it’s as close a feeling anyone can get to meeting their idol. Not that any of us would pass on being able to meet Taylor in person!

What’s the best way for Swifties on campus to get involved with SwiftSoc?

Emily (Social Secretary): We still have a lot planned for term 3, so it’s not too late to get a membership- we’ve got a club night on Monday, April 25 (with an exclusive discount for our members), our AGM (ft. wine and cheese), karaoke and a summer formal (with the chance to get your hands on some of the merch!). Along with all of our events, we have an active and thriving social media presence, so feel free to watch a few of our TikToks and maybe even get featured at our next event.

And finally, if you had to choose one Taylor Swift song and one era, what would they be and why?

Emily (Social Secretary): It HAS to be Reputation for me. ‘Dress’ is my all-time favourite song and I love the bad b**** energy Taylor has during her Rep era, so it’s a no-brainer for me. I am super excited for the album re-release and I just hope it will come before I finish university!

Vicky (Vice President): My favourite era will always be 1989 because it was this album that made me a massive fan of Taylor’s music. I have a few memories of exploring more of her music after falling in love with this album. Choosing a song would be difficult for me – I’d want to say ‘All Too Well (10-minute version)’ because it’s the longest masterpiece Taylor has ever written. However, I’d have to go with ‘Style’ because it has been my top choice for years. I am still praying for the re-release of 1989 to have a version of ‘Style’ featuring Harry Styles, it would be her best duet song yet!

Hannah (P&P): How could I pick just one?! I’ll compromise and do top 3 – ‘The 1’, ‘The Other Side of the Door’ and ‘Cruel Summer’. Folklore is my favourite album of all time but the Reputation era is completely unrivalled – it’s the only time I’ve seen her live and it was just generally such an amazing period.

As a fan of Taylor Swift myself, it’s wonderful to see SwiftSoc gaining recognition for their dedication as a society, and would encourage all Swifties across campus to get involved!