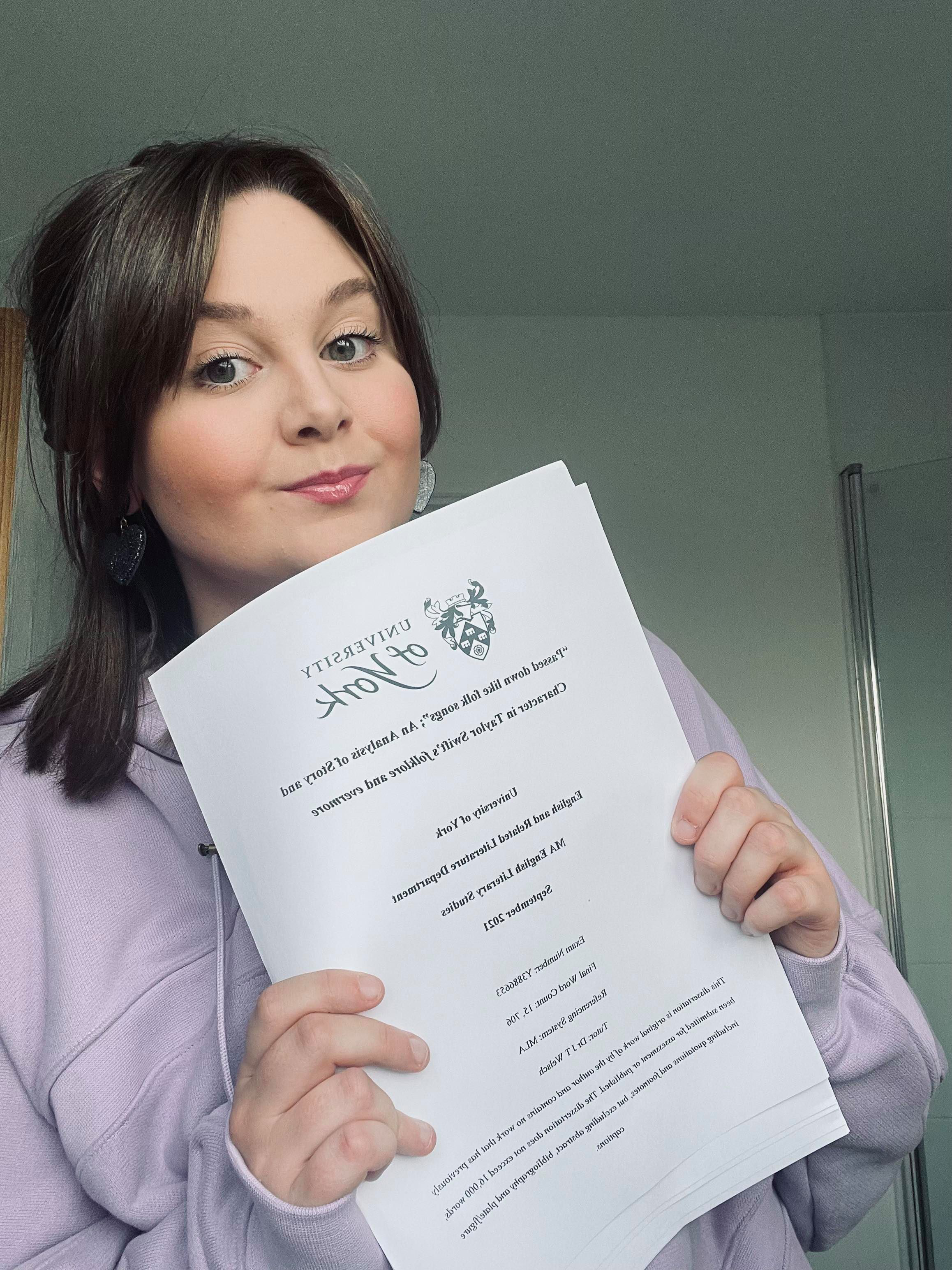 It feels like the Autumn term has simply flown by, and this post-grad student is already stressed about impending dissertations. Fortunately, I was recently in conversation with Liv Shaw, a student from our very own Uni of York, who became something of a local celebrity after a post about her Master’s thesis entitled “‘Passed down like folk songs’; An Analysis of Story and Character in Taylor Swift’s Folklore and Evermore” went viral on Reddit. The moment this came to my attention, I knew I had to speak to Liv and find out more.

What was your dissertation about and why did you choose this topic?

Liv: The topic was about characters and stories in Taylor Swift’s folklore and evermore albums that came out last year. I think I was drawn to talk about the topic because I did something quite similar for my undergraduate degree. My supervisor put me in contact with [the lecturer] JT Welsch, who is amazing, and he encouraged me to explore it the way I wanted to. It originally started off as me just wanting to talk about the albums; I didn’t know where I was going to go with it, but he helped me really shape the topic. Luckily, he had taken part in writing a collection of small essays about the albums as well, which was published just a month before, so it was excellent timing, really.

Did you feel any pressure because it was an unconventional topic, which may be perceived as not necessarily academic enough?

Liv: Yes, I think there was an element of pressure to it, because it felt like everyone else was doing theirs on classics, and mine wasn’t really a text. You can read the lyrics but at the end of the day, it is music – it’s not literature in a typical sense. Luckily, like I said, JT was nice enough to encourage me to explore it, but [I was worried] if other tutors would get what I was going for, or if they’d see it almost like a fanpiece, whereas obviously I wanted it to be academic and thoughtful. But at the end of the day, I just felt like I wanted to push forward with the topic I wanted to do – they couldn’t say no explicitly! There’s so many amazing staff on the faculty that I feel like they’ll just encourage you to follow whatever it is you want to do (within reason, of course), especially a programme like the MA in Literary Studies, which is just so broad, you can cover almost anything, really.

Did you face any difficulties while researching, such as a lack of scholarly material on this topic?

Liv: Yeah, there was definitely a lack of scholarly material on the typical sites, so I didn’t use too many specific academic criticisms about Taylor Swift. The dissertation was about the characters and stories she tells on the albums, so I just tried to broaden my searches on texts that were about stories within music, and characters that can be established within music as well. JT helped me narrow down some sources, which was really kind. Even when I couldn’t afford one book – it was £40 – he sent it over to me because he thought it was really valuable. I used music critics instead, people from respected organisations like MPR, and even some tabloid ones where it was necessary. It was difficult, but once you get into the groove of things, you get used to it, and it becomes a little less difficult.

Did you listen to Taylor Swift songs while writing the paper?

Liv: Yes! Big worry was that I was going to get sick of it. Luckily I didn’t, but who knows what my Spotify Wrapped is going to look like this year, it’s going to be chaos.

Do you have any advice for people who are struggling to write or choose a topic for their dissertation?

Liv: Think about what you like writing about the most, and just try it, because the likelihood is, someone will see it and they’ll think, “Oh, actually, I’m really interested in that as well, I’ve done research on that.” So just go for it, and if it doesn’t work out, at least you can say you tried. I thought I’d try and make mine sound literary, but the topic I put down on my initial dissertation form was just to talk about the album, I didn’t have any specifics. I included a few sources, but they weren’t exactly your typical academic sources, they were more like articles, informal essays, blogs, things like that. When I got my feedback, one of the markers said, “It’s obvious that the passion is there.” I’ve never had that feedback for an essay before, because maybe the passion wasn’t there on those occasions.

What is your all-time favourite Taylor Swift song and album? (You can only pick one!)

Liv: Oh my god! “This Is Why We Can’t Have Nice Things” from Reputation is my favourite song, because I’m a very petty person. When I feel like I’ve been wronged, I like to listen to that. And I think my favourite album is probably evermore. I mentioned all the albums in [the dissertation], so I obviously had to do a lot of re-listening, and that was the conclusion I came to. I don’t know why, maybe it’s the new bias – it only came out less than a year ago.

I know you said I could only pick one favourite song, but if I could have a second one, I would say “New Romantics” from 1989. I guess I just like the poppy ones, so I don’t know why evermore ended up being my favourite album!

Have you been a long-time Taylor Swift fan?

Liv: Yes. I remember I got Fearless for Christmas when I was younger, and the following year, Speak Now came out, so I got tickets to go see that, which was super exciting. That was my first concert I got to go with just my friend – my mum was waiting outside to pick me up! Ever since, I’ve been quite a loyal fan. When all the drama happened, I stood by her. I never let anyone say anything bad. And then obviously the truth came out, and I was like, “Yep, I knew it all along!” (laughs) I feel a little embarrassed sometimes, but when The Tab article came out, I was like, “I’m owning this!” My mum was sharing it on Facebook; she was like “Yes, my daughter loves Taylor Swift, and?”

Liv: It was so crazy. I quite like going on the Taylor Swift subreddit. So I finished my dissertation and posted the cover photo there. I was very careful to blank everything out, because I’d literally just submitted it that night. I posted it there and just went to bed, and the next morning, I’ve got hundreds of comments and 8,000 likes. Facebook had picked it up, and I was like, “Oh my god, that’s all me!” And then The Tab got in contact with me a few weeks after, and they were like, “We really want to write an article about this, is that okay?” and I said, “Obviously, yes!” So that sort of brought it back again, and it was so exciting. I felt like a local celebrity – every time I got into anyone’s car, I was like, “Yes, it’s me.” Being recognized for something academic just felt amazing. People I’d even cited in my dissertation were following me on Twitter, they were emailing JT saying “Oh, this girl has written this”, and he was replying back saying, “Actually, I supervised that project, I know all about it.” And then all the fan accounts picked it up, they were writing about me in their languages, and I was like, “Yes, I’m going global.” So it was really, really cool, honestly.

So, what’s next for you?

Liv: I’m a content writer for a marketing department at the moment. Working full-time and doing the MA full-time was chaos; I can’t believe I’m saying this, but thank god for lockdown, because I wouldn’t have been able to focus on my studies as much as I did without it. JT was always really understanding of my packed schedule. I hadn’t done my undergrad at York, so I think I’d only been to the campus a few times before there was no in-person teaching for the rest of the year. Bit of a weird one. (laughs) I’m saying all these nice words about JT, I’ve never even met him in person! I’ve registered for the January graduation, so I’m like, “I will see you there!” It’s like meeting your idol – everyone else has met him apart from me.

It didn’t feel like I was ever going to get there, but I got there in the end!

After the lovely chat with Liv, I reached out to JT Welsch, Senior Lecturer in English and Creative Industries and the director of the Centre for Modern Studies at York, in order to get his perspective as someone who played a major role in supervising this fascinating project.

What was your initial reaction when you found out about the premise, and what was your experience supervising the dissertation?

JT: I was thrilled when I first heard about Liv’s dissertation plans, and felt very lucky to have the chance to work with her supervisor. I often supervise students working on music, comics, games, and other popular culture – partly because of my interdisciplinary background and partly because of my personal research interests. But a research project about folklore/evermore seemed very special and timely, not least because I could see right away how passionate Liv was about the research. I’m a long-time fan, and was glad I could point Liv towards a special journal issue on the albums, which we rushed to publication in December 2020.

That sort of scholarly recognition seemed to mark the impact folklore/evermore has had among fellow academics. With all of the ways it captured the mood of early lockdown and connected more widely with issues and trends in contemporary fiction and poetry, Taylor’s double-album already feels like a literary milestone, which artists, writers, and scholars in different fields can look back on as a defining cultural moment.

Liv was both very brave and very savvy to take this leap with her dissertation. It can be hard to write about contemporary culture, when public reactions are still forming and there aren’t many academic sources yet. Our supervision meetings were always so enjoyable – where we often saved each other from getting lost in Swiftie lore – and I loved seeing how Liv connected literary research with her truly encyclopaedic knowledge of Taylor’s oeuvre. In that sense, she taught me a lot about the crossover between ‘scholarly’ methods and the analysis so many fans do as a labour of love.

What is your favourite Taylor Swift song and album? (You can only pick one!)

JT: Picking one song is impossible, but I’ll say ‘Out of the Woods’, for the depth it finds in simplicity. But for albums, I can’t say anything but folklore/evermore, thanks in part to Liv.