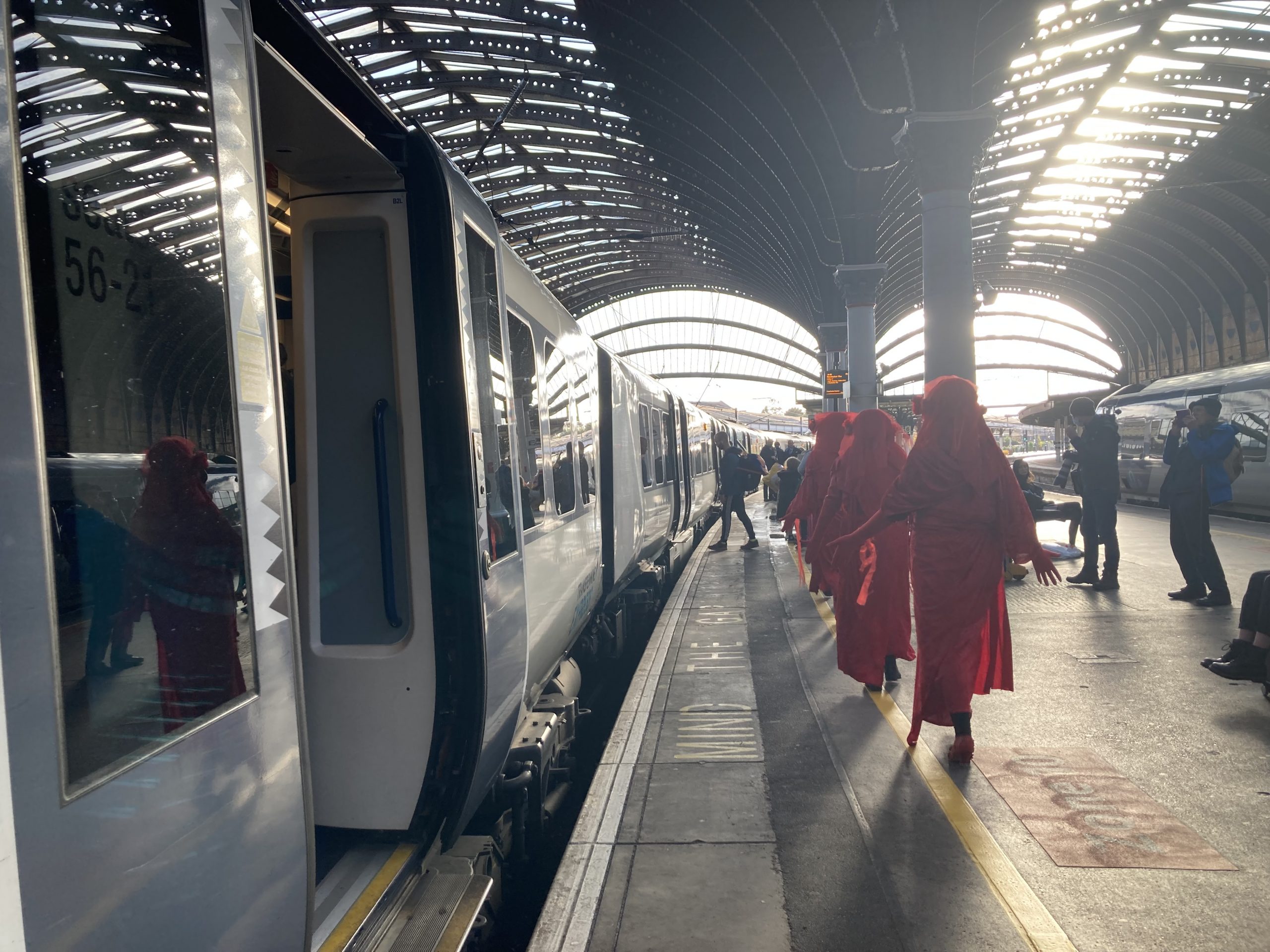 Halloween in York attracts a range of creative costumes on children and adults alike, however none more so than the symbolic red ensemble of the Red Rebel Brigade, seen at York Station on Sunday afternoon.

In another stop on the pilgrimage to COP26, which began in Truro on 31 October, the Red Rebel Brigade participated in a solemn walk through the station, supported by local climate activists and Extinction Rebellion.

The four performers displayed red dresses and ghostly white faces, mimicking the urgency of the climate crisis and the lifeblood that connects all species.

The performance group arrived shortly before 2pm, posing near the ticket booths whilst York Extinction Rebellion activist Laura shared a message of kindness and hope:

“And now everyone is your neighbour, and you can feel it coursing through you, the desire to forgive your enemy and you’ll never go back, to the terrible normal you had gotten so used to.

“Now you have let empathy and millions of her sisters become your guides. Because now you recognise that the season of kindness has only just begun. And now your day has come.”

The silent group then continued slowly through the station, walking single file to the beat of a lone drum and followed by a banner – ‘CODE RED for Climate’ – that had begun its journey in Truro. Gaining attention from passengers and rail workers alike, photos were snapped and children stared as the eye-catching activists passed by. The group paused briefly at Platform 5 for a series of symbolic poses, before boarding the 14:15 train to Manchester, where they met fellow Red Rebels and passed the baton – their long travelling banner.

The “calm and serene” event aimed to be undisruptive, representing instead the grief and anxiety of the nation and “trying to give world leaders courage”, as described by supporter Catherine Heinemeyer. Another local activist Gemma described it as “the opposite of disruption”, instead “bringing a voice to the people and celebrating the railways”.

She described wanting to show that “there’s a different way to bring things to the public light, it doesn’t always have to be chaining yourself to something, you can get pretty creative with these things.”

The group had specific messages for the government and the public, with an overall aim of inspiring hope.

“We’re asking government to make these changes, it’s not just down to individuals, it’s got to be system changes and it has to come from the world leaders.”

The activists felt “ a real sense of hopefulness” throughout the event.

“At the end of the day we’re just delighted that people engage with it.” Laura elaborated. “We’re here, we’re opening the door.”

“And the sun even came out,” exclaimed Gemma.

The event was followed by a banner drop for the city walls, with support from honking cars.

Further action will occur at York Minster on November 6 at 12pm in line with the UN’s Global Day of Action.