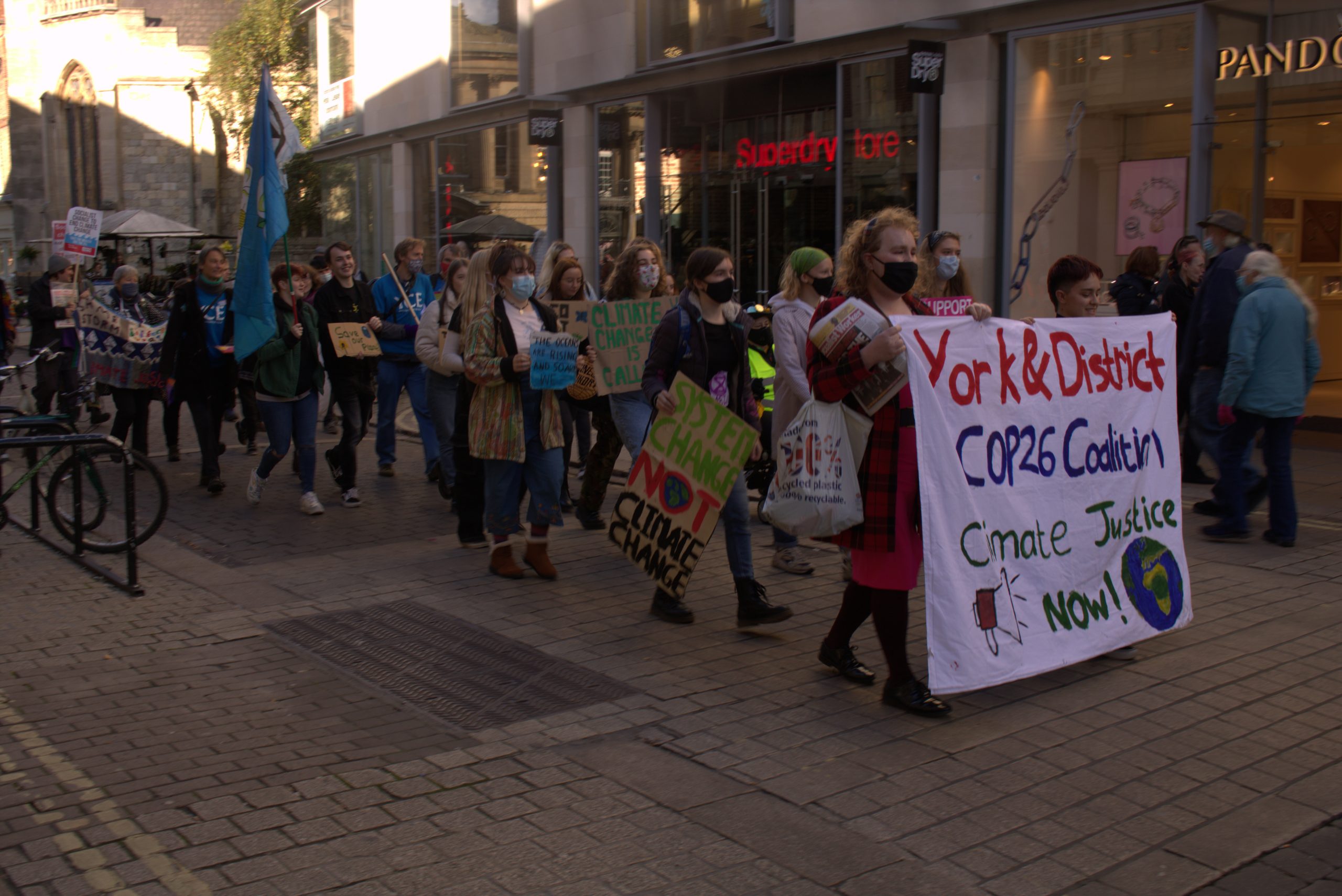 “No more coal, no more oil, keep the carbon in the soil.” These words were heard throughout York on Friday afternoon as protesters assembled in St Helen’s Square to combat what they described as the “system that is destroying our planet”.

The event, which included marches, speeches, and focus groups, was an important chance for activists to network and pool their knowledge, as many individuals and climate groups banded together to “make a big impact and draw attention to the issues”. The organisers laid out a table where attendees were encouraged to offer suggestions to improve York’s eco-friendliness and donate to the cause.

Student organiser Tobi highlighted the urgency of the moment: “We can’t just wait until we’ve been in the industry 30 years, when we’re in power. Adults are supposedly doing stuff but not a lot has changed.”

Students Iona, Izzy, and Niamh described this pressure: “[It’s] on our shoulders when it shouldn’t be.” They called for greener methods of transportation in York, suggesting that the city build on the success of electric scooters by adding bike tracks, cheaper buses, and a fully pedestrianised city centre. They also advocated for greater climate awareness within school curriculums, asserting that “we learn from the media and ourselves but it needs to be in education too”.

The call for continued climate conversation in schools was echoed by fellow protestors, namely Cath Heinemeyer, a lecturer from York St. John University. She encouraged the gathered students to tell their schools what they want to be learning, because if students “demand that your education be reshaped to the needs of the moment… your teachers will have to listen”.

Richard Lane from York Community Energy also prioritised this: “Students want to see clean energy in their universities. Educators need to listen and let them teach you.”

James, a member of the Socialism Society from the University of York, described how “capitalism is the root of climate change”.

“Currently, capitalism dominates the system which has engendered climate change. As the antithesis of capitalism, socialism needs to answer the call. The same system that has us working unsociable hours is destroying our planet. We can’t think about them as separate issues; everything is connected.”

He spoke about the way in which companies put the onus on the consumer: “Corporations offer us micro consumerist solutions – paper straws, recyclable packing – but it’s going to take radical measures to make any serious change. It’s the same fight. The fight for jobs, the fight to secure education, is the same as the one against climate change.

“There needs to be a feeling of urgency. The companies present the muse of global warming as a mythical phenomenon, but it’s not enough to say that climate change is bad. That is self-evident. We need to provide the answers. It’s time to get serious. It’s time to get organised.”

He encouraged students to find them on @yorkyoungsocialists on Instagram.

In a harrowing musical performance of ‘Break Our Fall’, singer-songwriters Esther Clare and Ben Herron commented on the surge of nature seen throughout the lockdown periods, “We can’t just go back to the way things were.” Lyrics like “Slow down, let our planet heal” halted the busy city centre for a few moments of quiet reflection.

After the open mic session, the group of activists led an organised march on the hour, setting off from St Helen’s Square, circling around Parliament Street, down New Street, before returning to the square. It certainly generated the attention they wanted. People up and down the town centre stopped and watched the group as they chanted: “What do we want? Climate justice! When do we want it? Now!” Later, the chants subdued into a whispered song:

“The people gonna rise like the water
Gonna shut this system down
In the voice of my great granddaughter
Saying climate justice now.”

Not all responses were positive. Some pedestrians were heard shouting “get a job” and “assholes” at the crowd of activists. In response to such glaring public reactions, Caroline (affectionately known as Cowboy) said, “You’ve heard it before, so many times that you really can’t think of anything else to say.” Involved in climate protests since 2014, she described a love for trying to make things better. “[Protesting] is not for the faint hearted. It’s physically, mentally and emotionally hard. It transcends every type of person. It’s not a single generation issue.

“The older generation are there to facilitate the youth. It’s their protest.”

Further protests are being held by the group on the 5th and 6th of November.