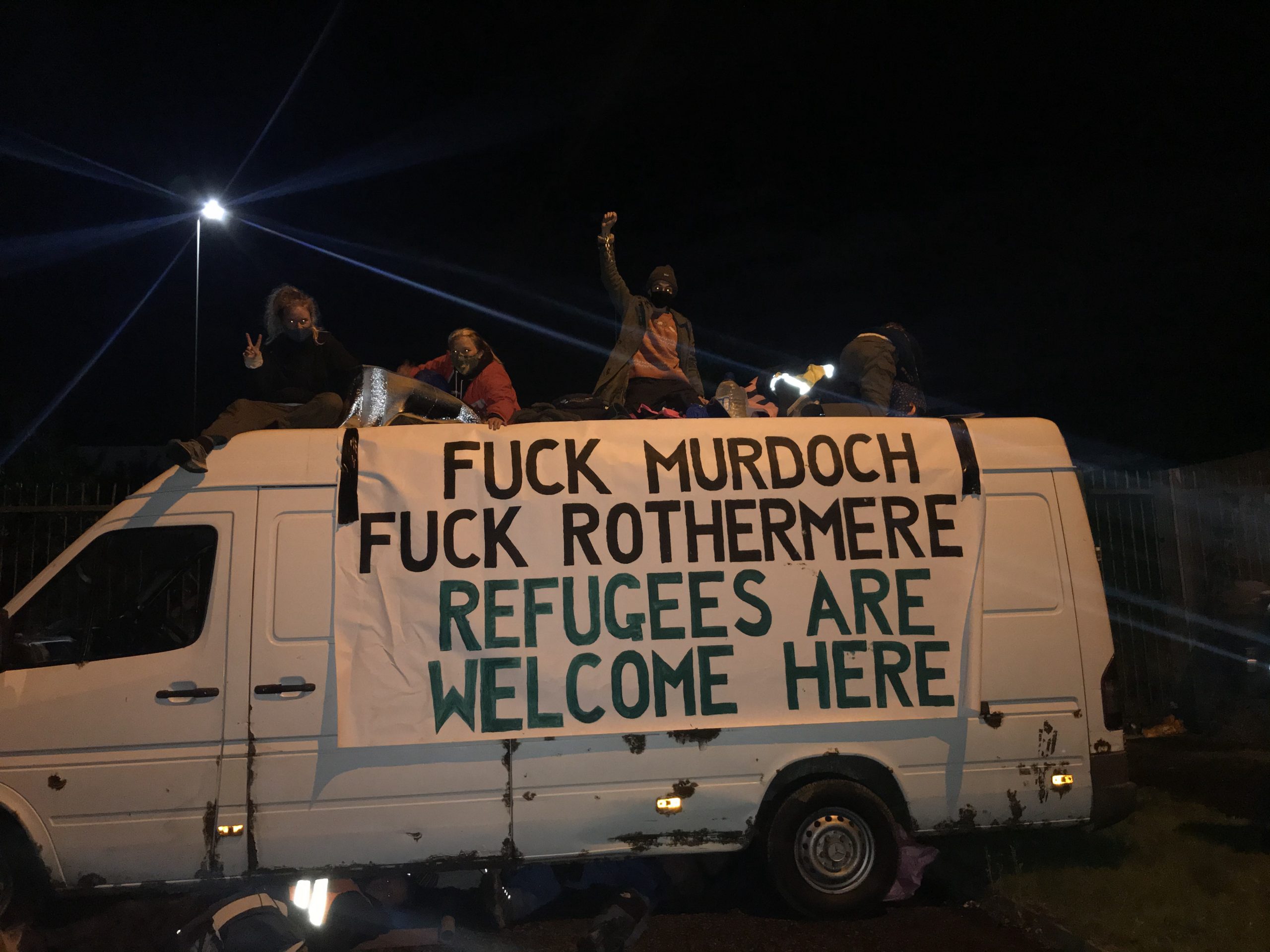 On the Morning of 3 September, the nation awoke to empty spaces where newspaper stacks should have towered.

Our country’s most dominant papers, including The Sun, The Mail, The Times and The Telegraph were halted after NewsCorp Print Presses were blockaded by Extinction Rebellion  (XR) activists “to expose the failure of these corporations to accurately report on the climate and ecological emergency, and their consistent manipulation of the truth to suit their own personal and political agendas”.

Vision sat down with one activist, who spent 19 hours in police custody after 12 hours on a boat emblazoned with a sign: “Fuck Murdoch, Fuck Rothermere, Refugees are Welcome Here”.

“You can view how good an action is by who it pisses off,” they said. “This action managed to annoy Rupert Murdoch, the Viscount Rothermere, Priti Patel, Boris Johnson, and Jeremy Clarkson, who are all people who – ideologically speaking – are entirely against what I stand for.”

They have indeed received a lot of criticism for the protests: Priti Patel herself claimed it was “an attack on our free press, society and democracy”.

The XR rebel found these comments “incredibly ironic”: “the ‘free press’ in this country is defined by profit. It is five billionaires that control 70% of the print news; that’s not free. That is not how a democratic process works and that is not how a free process works”.

Criticisms reached further heights as it came to light that the blockade had prevented the distribution of articles highlighting the impact of the climate crisis, including one by David Attenborough in The Sun, and an environmental investigation by ex-Vision editor Helena Horton for The Telegraph.

XR remain resolute over the success of their action.

They claim that whilst a “handful of billionaires … have realised they need to performatively cover the climate and ecological emergency on occasion … they still act as a blockade. They stop us from achieving a free democracy. They stop us from hearing the truth. They have downplayed the climate and ecological emergency and that will be our undoing.”

The rebel was further keen to highlight other key issues that were brought up in the protests, including their own, personal motivation.

“I acted largely out of self defence. In July 1993 there was an article posted in the Daily Mail entitled “Abortion Hope after “Gay Genes” findings” and this was an article which was directly trying to stop gay people from existing. I was protesting to make sure that I was able to fight back against these people that so clearly just want me to not exist”.

However, this remained a topic that has been missed out in media coverage of the actions. Were they pleased with the blockade’s final results?

“Of all those messages that people were going into this action to try and get across: the climate and ecological emergency one came front and foremost, which, again, I think is a very, very important message that needs to come across. I am concerned that the other messages that came across weren’t picked up by the mainstream press as much as they likely should have been. In that sense, I don’t think the message got across in the way it probably should have done, but this is only the beginning.”