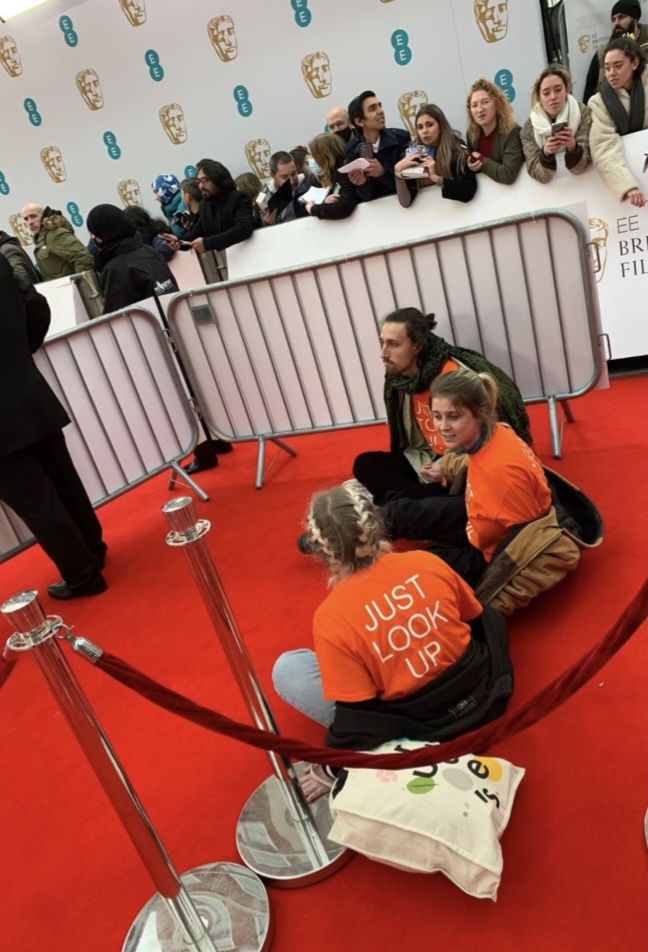 Filmmakers, a marching band, and the Mona Lisa.

What do all of these seemingly unconnected groups have in common you ask?

Well in recent months all three became targets of disruption for climate activists. As a lowering of COVID-19 restrictions hails in the return of large-scale in-person events and tourism, so too returns the non-conventional protests of climate activism.

The first group, award-nominated filmmakers and celebrities, saw the BAFTA red carpet transformed into a real-life version of the film “Don’t Look Up” as Extinction Rebellion protesters jumped the fence, set off smoke bombs, banged drums, and cried out “Just Stop Oil”.

Inspired by Adam Mckay’s Oscar-nominated Netflix film, which sees two scientists played by Leonardo Di Caprio and Jennifer Lawerence attempt to warn humanity of a world-ending asteroid, the three activists glued themselves to the carpet as security, hesitant to move them, constructed a hasty barricade around them.

Next up was a crowning achievement – the PLatinum Jubilee ‘Trooping of the Colours’ – where Animal Rebellion called for an end of hunting on royal land by sending eight protestors onto the mall to sit with leaflets in the path of the Grenadier Guards marching band.

Finally a cake attack on the most famous smile in all of Europe, Leonardo Di Vinci’s ‘Mona Lisa’. Here a lone wolf climate activist dressed up as an old woman in a wheelchair and speared cake across the bulletproof glass that protects the world-famous painting, shouting “think about the earth” as he was dragged away by security.

In all three cases the aim was simple – attention. A common tactic of unconventional political participation, any and all news is good news, even if it means facing arrests. All three events boasted both a large media presence (whether interviewers, BBC TV coverage or the mass of civilian iPhones photographing the world’s most famous painting) and a large police presence. The risk of arrest was high… the risk of media coverage, was even higher.

And yet a question remains… Does this type of unconventional, attention-based activism actually work?

While all these events certainly made it into the news coverage, hence our awareness of them, the BAFTAs event was a slow build, overshadowed largely by the event itself and smoothly cut from any red carpet highlights. Aiming to appeal to the hearts of famous celebrities, protester cries for them to “use your platforms” fell on the rushed and distracted ears of award-nominated actors and presenters as they were hustled inside the Royal Albert Hall.

And yet when actor Benedict Cumberbatch took the time to pause and ask the protesters what he could do to help -what alternatives could be created instead of fossil fuels- he received a repeated singular response of “Just Stop Oil”, frustrating the famously climate-aware actor.

Do these acts really create meaningful media buzz – or do such occurences primarily generate a negative perception amongst the general public and an alienation of more conventional climate activists?

The BAFTA protest prompted booing and annoyance amongst the crowd, who had their hopes of meeting their favourite actors blocked by an influx of security. The Jubilee disruption saw cheering for the police who swiftly dove on the intruders. Mona Lisa’s assailant generated confusion, laughter, and memes across the internet for its random and unsuccessful premise.

The return of widespread unconventional activism in the post-COVID-19 world raises relevant questions regarding potential harms and a loss of effectiveness amongst the public.

Does it do more harm than good for conventional environmentalists, with disruption protestors alienating those who were on their side, to begin with, and generating a childish perspective towards all climate activism amongst policymakers?

Will the world become fatigued by the repeated efforts of these groups, with the public becoming ignorant of warnings, which ultimately lessens widespread climate awareness?

I’m still inclined to say that – following the strategy of the Extinction Rebellion themselves – any climate activism is good climate activism. The intentions of such protests still blossom from a thoughtful, impassioned and couragous mindset. While I remain hesitant towards their effectiveness and skeptical of the reactions of the general public, any action which aims to keep this global priority as just that, a priority, is a beneficial one.

But maybe the planet would be safer in the long run if we tried something a little more convincing than letting the Mona Lisa eat cake?